Remember the storm that rose with the ‘Peril’ revelation of General Milley’s call to China? Do not forget how ex-president Trump’s state of mind was in question as he refused to acknowledge defeat and exit the White House. The ex-president has yet to acknowledge his election defeat nearly a year later. The former Commander-in-Chief, who had “singular authority” to launch nuclear weapons, continues to talk of revenge and rail against foes real and imagined…

Today, with national turmoil since Donald Trump’s historic defeat in November 2020, and amid a drumbeat of the ex-president’s charges of  “a steal”, new insurrection revelations are revealed. Even as the former president talks of a return to office, Congressional hearings report failed plans and plots to remain in office.

The decisions of the former Commander-in-Chief, and the military Chain of Command with singular nuclear authority invested in the president, have taken on additional gravitas that cannot be and should not be overlooked.

Congress needs to move to block ‘First Use’ orders that would devastate national security. Restricting Nuclear First Use legislation has been drafted. It needs to pass.

“Subverting Justice: How the Former President and His Allies Pressured the DOJ to Overturn the 2020 Election.”

The Interim Senate report reveals new details about former President Trump’s efforts to exploit the Justice Department to overturn the results of the 2020 election, including how top Department of Justice officials threatened to resign en masse over Trump’s push to install a loyalist as acting attorney general.

The transition from President Donald J. Trump to President Joseph R. Biden Jr. stands as one of the most dangerous periods in American history. But as # 1 internationally bestselling author Bob Woodward and acclaimed reporter Robert Costa reveal for the first time, it was far more than just a domestic political crisis. Woodward and Costa interviewed more than 200 people at the center of the turmoil, resulting in more than 6,000 pages of transcripts—and a spellbinding and definitive portrait of a nation on the brink.

The Danger of an Unhinged President 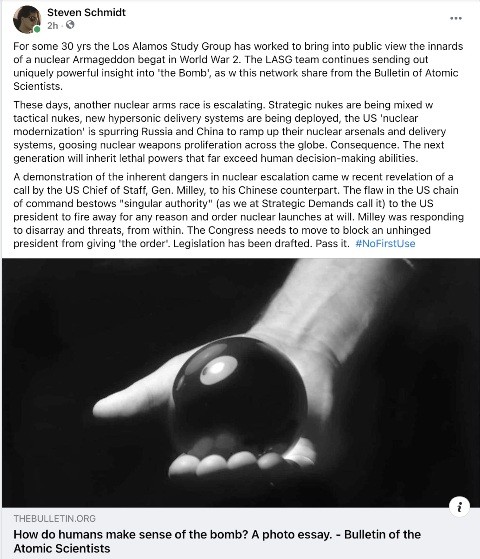 Bulletin of the Atomic Scientists – How do humans make sense of the bomb?