For years Strategic Demands has pushed for rational controls of nuclear weapons, in particular the critical need for new ‘first use’ controls over the ‘sole authority‘ of the U.S. president to order nuclear war… Now comes a harsh realization this is no academic issue 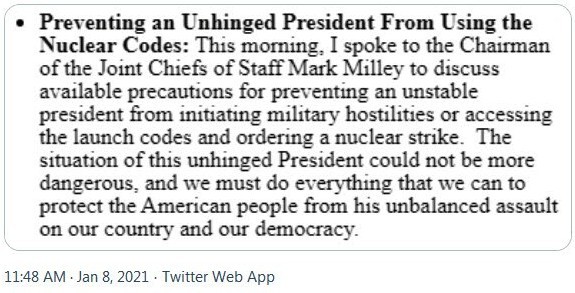 Update/debate on Nuclear Weapons authority and chain of command — February 26, 2021 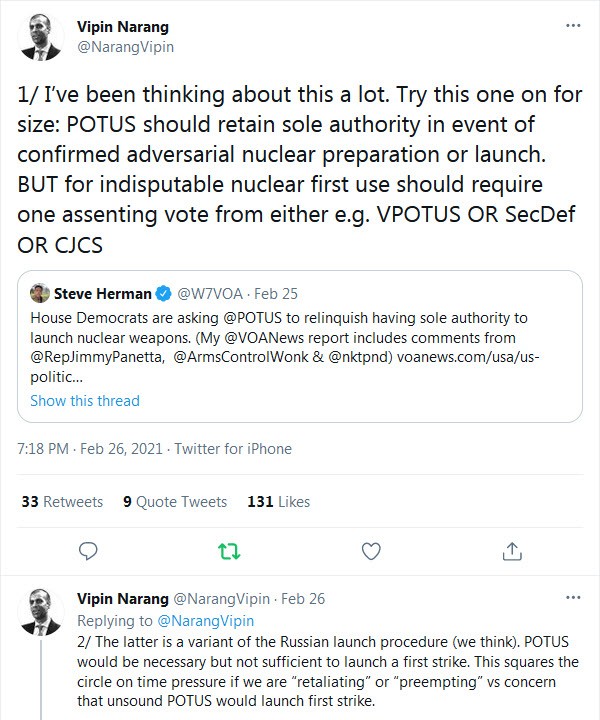 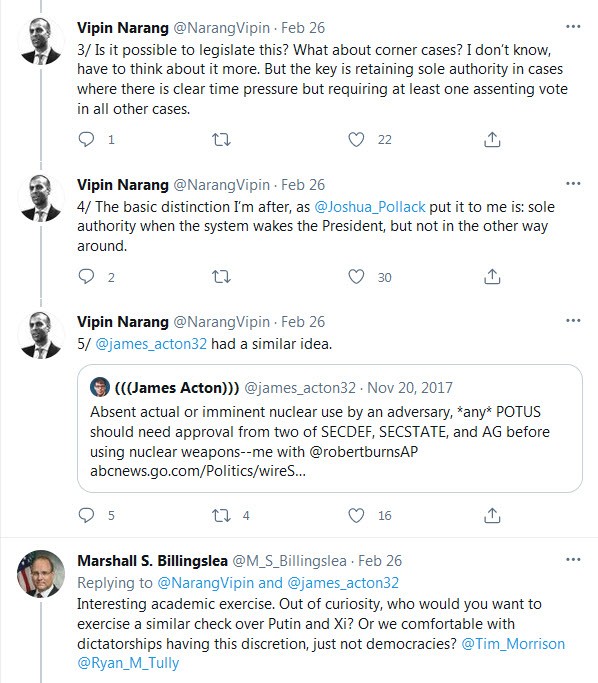 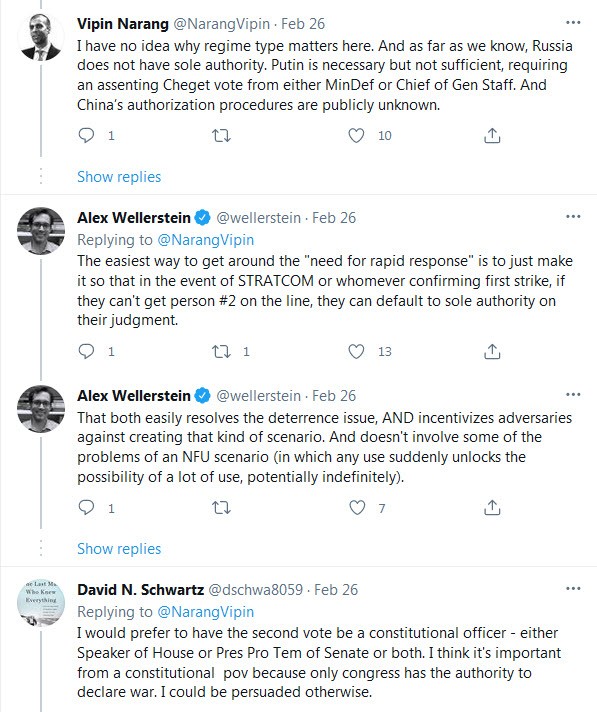 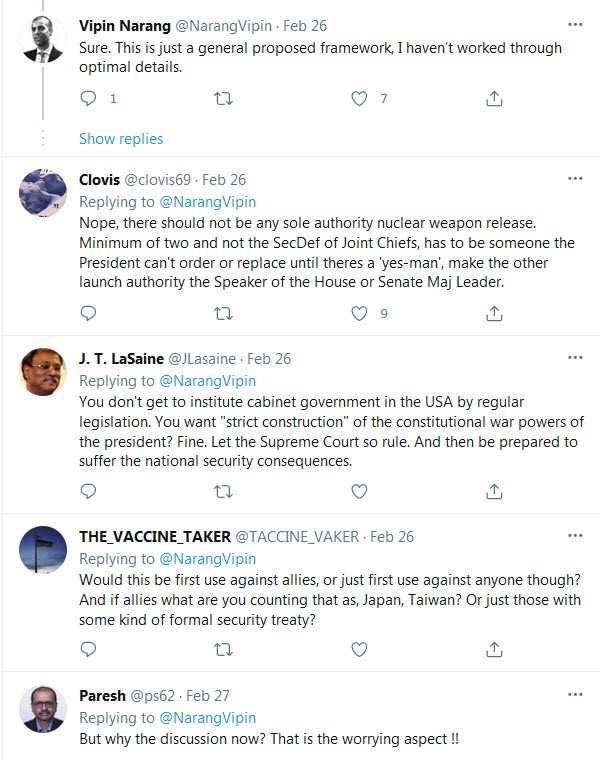 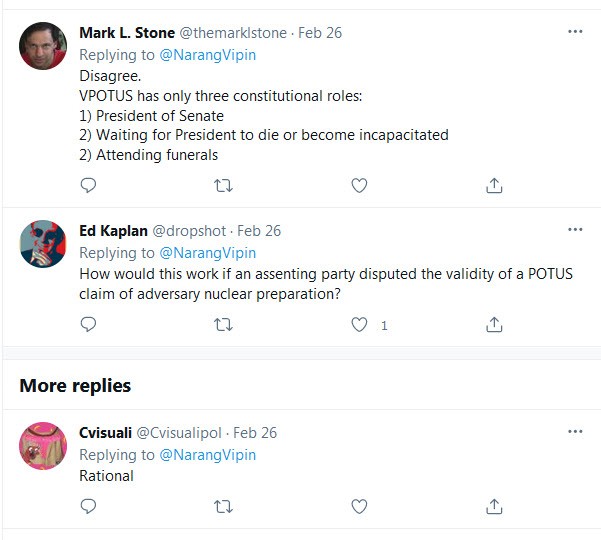 January 8, 2021 after the insurrection/attack on the U.S. Capitol

House Speaker Nancy Pelosi said the nation’s top military officer assured her safeguards are in place in case President Donald Trump seeks to initiate a nuclear strike — something he has the sole authority to do.

Pelosi relayed the assurance on a call with Democrats on Friday afternoon, without providing more details, according to a person who heard the briefing. She said she asked because many lawmakers and other Americans had expressed concern.

The comments came after Pelosi said in a letter (see following) to fellow Democrats that she spoke to General Mark Milley, chairman of the Joint Chiefs of Staff, about “available precautions for preventing an unstable president from initiating military hostilities or accessing the launch codes and ordering a nuclear strike.”

“The situation of this unhinged President could not be more dangerous, and we must do everything that we can to protect the American people from his unbalanced assault on our country and our democracy,” Pelosi said in the letter.

It wasn’t immediately clear if the assurances Pelosi said she received about Trump’s nuclear powers involved standard operating procedures or additional hurdles put in place specifically for Trump. The U.S. doesn’t have a “no first strike” policy regarding the use of nuclear weapons.

From Strategic Demands: Singular Authority of the U.S. President to launch nuclear weapons

According to the Federation of American Scientists, Trump’s authority is “inherent in his constitutional role as Commander in Chief.” Military officers could refuse to comply with what they believe is an illegal order and there have been efforts in the past to limit the president’s powers, but Congress currently has no authority to override him.

Pelosi’s letter also cited the broader possibility of Trump “initiating military hostilities” before he leaves offices on Jan. 20. In the last year, House Democrats have sought to limit his ability to launch an attack against Iran, and the president’s critics have expressed increasing concern as tensions have risen in recent weeks that Trump would direct the military to carry out a military strike against the regime in Tehran… 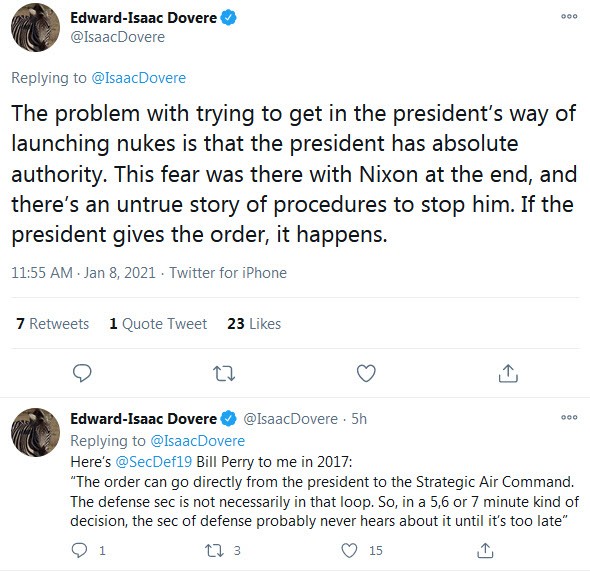 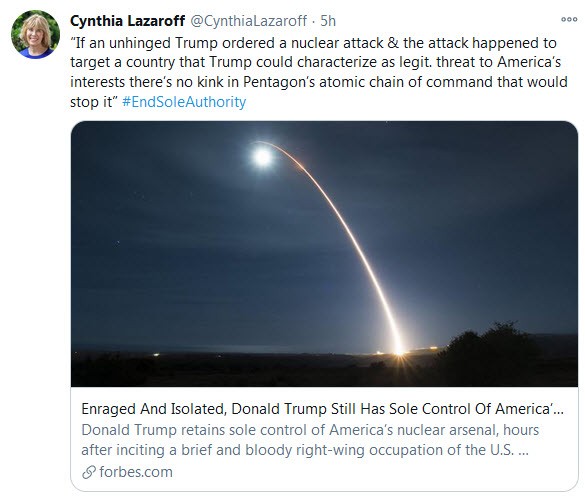 The full text of Speaker Nancy Pelosi’s letter of January 8, 2021.

The nuclear weapons issue discussed with the Joint Chiefs of Staff Chairman, Mark Milley, is highlighted below.

It is a spirit of pride and with great solemnity that I write to you about the events of this past week.

Thank You to Members Defending Democracy: On Wednesday evening, following an horrific assault on our Democracy, our Democratic Caucus showed to the country and to the world that we would not be diverted from our duty to validate the election of President-elect Joe Biden. Despite the desecration of the temple of our democracy, the House upheld its responsibility to the Constitution and to the American people. My deepest gratitude goes to our scholars — Reps. Raskin, Lofgren, Schiff, and Neguse — and to the delegations of Arizona and Pennsylvania facing objections who made the case for respecting the will of the American people.

Capitol Police: It is with great sadness that I also write to share the news that a twelve-year veteran of the U.S. Capitol Police, Officer Brian Sicknick, died after defending the Capitol complex and protecting all who serve and work here. The perpetrators of Officer Sicknick’s death must be brought to justice. Five people have now died because of the act of insurrection. This is a stain on our nation’s history.

While we are appreciative of the bravery of the Capitol Police, we are disappointed in the lack of leadership. For that reason I called upon the Chief of the Capitol Police to resign, and he has. I have also accepted the resignation of the House Sergeant-at-Arms. Chair Lofgren will discuss on our noon Caucus call how we will move forward with responding to the failures that allowed this tragedy to happen.

Removing the President From Office: As you know, there is growing momentum around the invocation of the 25thAmendment, which would allow the Vice President and a majority of the Cabinet to remove the President for his incitement of insurrection and the danger he still poses. Yesterday, Leader Schumer and I placed a call with Vice President Pence, and we still hope to hear from him as soon as possible with a positive answer as to whether he and the Cabinet will honor their oath to the Constitution and the American people.

Preventing an Unhinged President From Using the Nuclear Codes: This morning, I spoke to the Chairman of the Joint Chiefs of Staff Mark Milley to discuss available precautions for preventing an unstable president from initiating military hostilities or accessing the launch codes and ordering a nuclear strike. The situation of this unhinged President could not be more dangerous, and we must do everything that we can to protect the American people from his unbalanced assault on our country and our democracy.

I am very grateful to Members for your communications regarding what you think should happen. I take your suggestions very seriously as we build consensus in our Caucus as we go forward.

Thank you for your patriotism, your courage and your leadership.

What Could Stop an ‘Unhinged’ U.S. President From Ordering a Nuclear Strike? 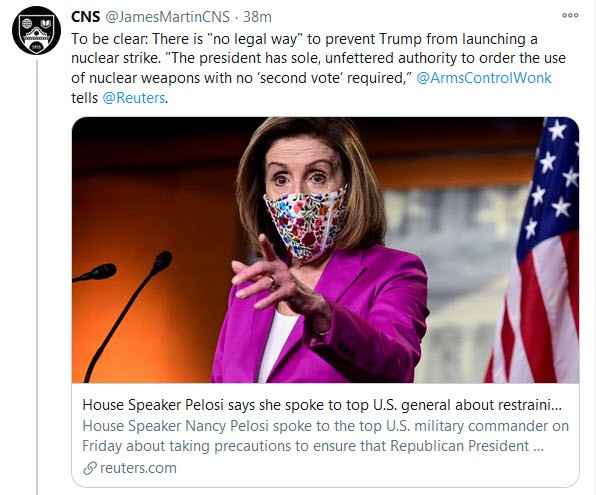 To be clear: There is “no legal way” to prevent Trump from launching a nuclear strike. “The president has sole, unfettered authority to order the use of nuclear weapons with no ‘second vote’ required,” @ArmsControlWonk tells @Reuters

The Finger on the Button

James Martin Center for Nonproliferation Studies (CNS) at the Middlebury Institute of International Studies at Monterey.

The debate about the personality of Donald J. Trump has shed new light on an old question: how much of the terrible responsibility to inflict large-scale nuclear destruction should nuclear-armed countries invest in a single person?

The terms of this debate are well known and relate to the specific requirements of nuclear deterrence. On the one hand, there is a broad desire to retain political control and put in place measures to ensure there is never accidental or unauthorized nuclear use. On the other hand, the credibility of deterrence is thought to rest on the ability to always launch if and when decided, even in demanding cases such as a surprise attack. These twin goals are in tension, a situation that Peter Feaver terms the “always/never” dilemma.

Each nuclear-armed state has struck a slightly different balance between these measures, a balance that differs both among the nuclear-weapon states as well as within those states over time. While the “two-person rule” is common throughout the chain of command, several nuclear-armed countries choose to concentrate the legal authority to order the use of nuclear weapons in the hands of a single political leader. It is important to note that authority is not the same thing as ability—in most, if not all, nuclear-armed countries, the legal authority to order the use of nuclear weapons is held at a much higher level than is the actual ability to launch those weapons. Effectively, the two-person rule divides the ability to carry out the action among multiple persons, thus increasing the likelihood that nuclear weapons will only be used on the order of the appropriate authority. The election of Donald Trump has renewed debate over the wisdom of this arrangement.

The issue is not merely about President Trump. Many nuclear-armed states are expanding the number and types of nuclear weapons they possess, introducing systems that alter the requirements for command and control. (Several new countries are deploying or play to deploy sea-based nuclear capabilities, including India, Pakistan, North Korea, and possibly Israel.) New developments in technology can improve the security of nuclear command and control (encryption, communications, etc.) while also introducing new vulnerabilities.

Few studies have detailed the procedures that govern the use of nuclear weapons in all nuclear-armed countries in a comparative way. Indeed, since a report to the US House of Representatives in 1975, almost no publications have been devoted to this subject, a rare exception being a short though valuable 2017 Union of Concerned Scientists report.

CNS Occasional Paper #45 seeks to address sets of questions for each of the nine known nuclear-weapon possessors: