The old nuclear order, rooted in the Cold War’s unthinkable outcomes, was fraying before Russia invaded Ukraine. Now, it is giving way to a looming era of disorder unlike any since the beginning of the atomic age.

Russia’s regular reminders over the past three months of its nuclear might, even if largely bluster, were the latest evidence of how the potential threat has resurfaced in more overt and dangerous ways. They were enough to draw a pointed warning to Moscow on Tuesday from President Biden in what amounted to a tacit acknowledgment that the world had entered a period of heightened nuclear risks.

“We currently see no indication that Russia has intent to use nuclear weapons in Ukraine, though Russia’s occasional rhetoric to rattle the nuclear saber is itself dangerous and extremely irresponsible,” Mr. Biden wrote in a guest opinion essay in The New York Times. “Let me be clear: Any use of nuclear weapons in this conflict on any scale would be completely unacceptable to us as well as the rest of the world and would entail severe consequences.”

Alexei Zhuravlev, a member of Russia’s parliament, proclaimed on the state TV channel Russia-1 Monday that the country has the capability to launch a devastating nuclear attack on the US over its support of Ukraine in the war.

“I will tell you absolutely competently that to destroy the entire the East Coast of the United States, two Sarmat missiles are needed,” the pro-Kremlin pundit said, referring to Russia’s new intercontinental ballistic missiles, which are known as “Satan-2” in NATO countries.

“And the same goes for the West Coast,” Zhuravlev continued. “Four missiles, and there will be nothing left.”

Russia is holding a nuclear drill in a ‘power show’ to the world as thousands of troops have lost their lives and a massive amount of their weaponry have been destroyed in the Ukraine war.

The nuclear drills are being held in the Ivanovo province. Nearly 1,000 servicemen are attending the exercise, which is also witnessing the participation of the intercontinental ballistic missile launchers Yars, according to Interfax news agency.

Russian state television has broadcasted an unsettling new threat, with a Duma politician boasting Russia could destroy the United States with four nukes.

What America Will and Will Not Do

As the war goes on, I want to be clear about the aims of the United States in these efforts.

America’s goal is straightforward: We want to see a democratic, independent, sovereign and prosperous Ukraine with the means to deter and defend itself against further aggression.

As President Volodymyr Zelensky of Ukraine has said, ultimately this war “will only definitively end through diplomacy.” Every negotiation reflects the facts on the ground. We have moved quickly to send Ukraine a significant amount of weaponry and ammunition so it can fight on the battlefield and be in the strongest possible position at the negotiating table…

We do not seek a war between NATO and Russia. As much as I disagree with Mr. Putin, and find his actions an outrage, the United States will not try to bring about his ouster in Moscow. So long as the United States or our allies are not attacked, we will not be directly engaged in this conflict, either by sending American troops to fight in Ukraine or by attacking Russian forces… 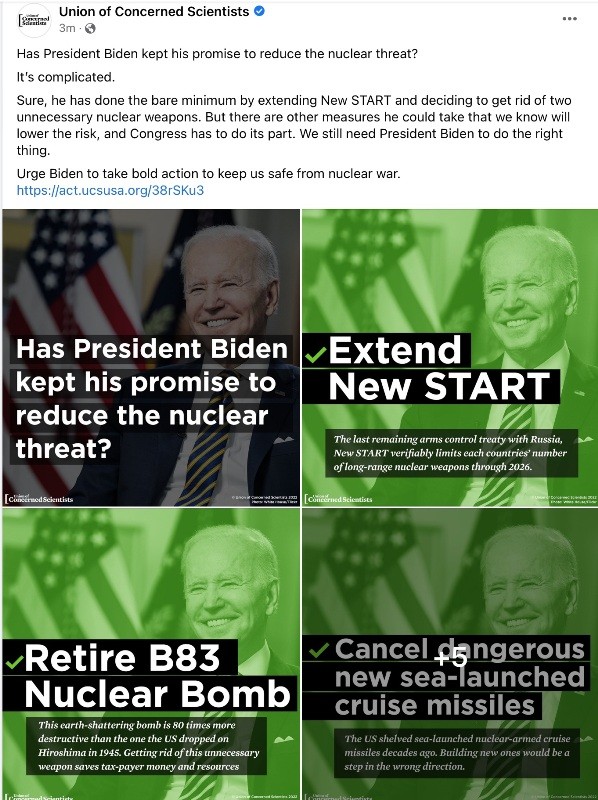 Roughly 9,000 nuclear weapons are hidden away in bunkers and missile siloes, stored in warehouses, at airfields and naval bases, and carried by dozens of submarines across the world.

nearly all the major nuclear powers—including the United States, Russia, and China—are now significantly increasing their nuclear arsenals in size, capability, or both.

The US arsenal contains about 5,500 nuclear weapons, 1,389 of which are deployed and ready to be delivered.

Roughly half of the deployed weapons are maintained on hair trigger alert, able to be launched very quickly after a presidential order. These alert forces include almost all of the 400 silo-based intercontinental ballistic missiles (ICBMs), and a comparable number of warheads on submarine-launched ballistic missiles (SLBMs). ICBMs can be launched within a couple minutes; SLBMs within 15 minutes.

The Russian arsenal contains ~6,300 warheads, 1,458 of which are deployed; combined with the United States, this accounts for more than 90 percent of the world’s nuclear weapons.