On January 14, 2023 we remember history being made as the former Soviet Union president Mikhail Gorbachev made an offer that former US president Ronald Reagan couldn’t refuse….

An initial letter led to an advertisement in the NY Times, which led to negotiations in Iceland which led to nuclear agreements, nuclear weapons reductions, verification, communication and yet, now some thirty + years later, we witness a breakdown at every level of the nuclear weapons threat.

A new nuclear arms race threatens humanity in ways that are described as more dangerous than ever…. 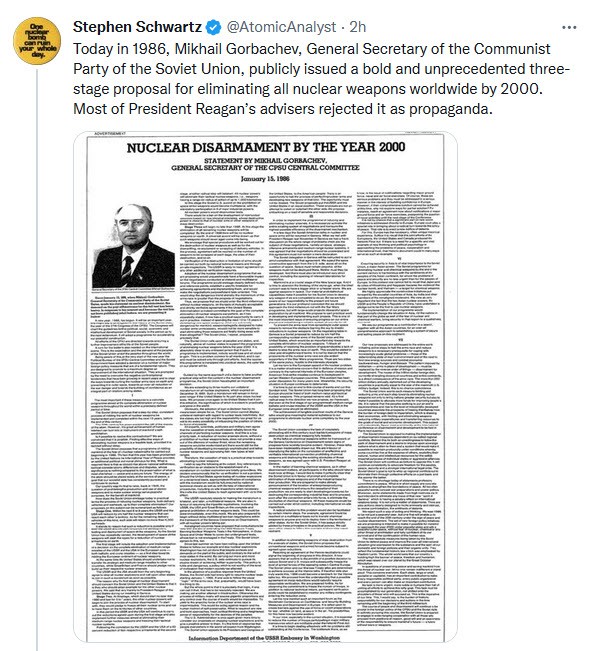 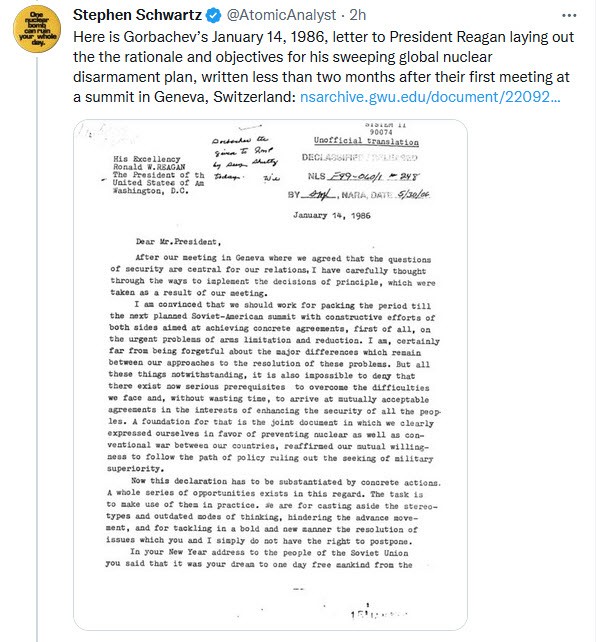 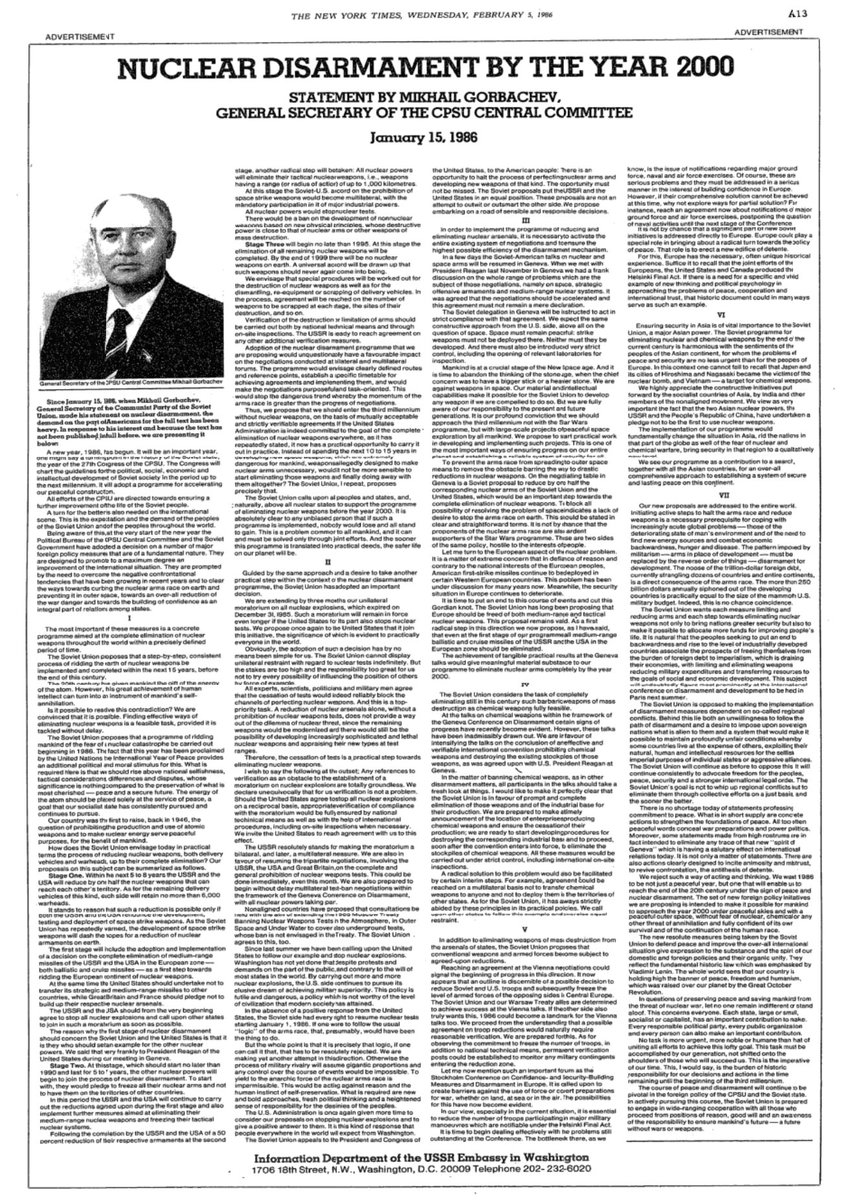 Mikhail S. Gorbachev proposed a broad timetable today for the elimination of all nuclear arms by the end of the century and announced a three-month extension of the Soviet moratorium on nuclear tests.

But the Soviet leader declared that his disarmament process could start only if the United States joined in renouncing the testing and deployment of what he called ”space strike weapons.” That is the Soviet reference to President Reagan’s research program on space-based defenses.

Mr. Reagan has repeatedly insisted that the space defense program, popularly known as Star Wars, is not negotiable, and the dispute has blocked substantive movement at the Geneva arms talks. [ In Washington, Mr. Reagan said he welcomed the Soviet proposal and would study it carefully.

Mr. Gorbachev described his proposal as the most important of several foreign policy decisions made by the Politburo at the start of 1986.

The proposal, read by an announcer on television and published by the press agency Tass, was issued on the eve of the resumption of the Geneva negotiations, and Western diplomats said they saw it in large part as an attempt to seize the public relations initiative in the talks.

The nuclear plan proposed by Mr. Gorbachev consisted of three broad stages that would culminate in 2000 with a ”universal accord that such weapons should never again come into being.” It called for the Soviet Union and the United States to start the process this year and for other nuclear powers to join later.

The proposal broadly covered all aspects of disarmament and was based mostly on existing Soviet positions. Diplomats said it differed from previous Soviet calls for total nuclear disarmament largely in fixing stages and deadlines for the process.

In his proposals for the elimination of medium-range missiles in Europe, however, Mr. Gorbachev made what Western experts thought could be a significant departure.

Outlining the first stage of his program, Mr. Gorbachev called for the ”complete elimination of intermediate-range missiles of the U.S.S.R. and the U.S.A. in the European zone, both ballistic and cruise missiles, as a first step toward ridding the European continent of nuclear weapons.” Moves by Britain and France

At the same time, he said, Britain and France would pledge not to enlarge their nuclear arsenals.

The stance appeared to resemble the offer that President Reagan made, and the Soviet negotiators rejected, at the Geneva talks on medium-range arms, which collapsed in November 1983 when the Russians walked out. Mr. Reagan proposed in 1981 that the United States would abandon plans to deploy new medium-range missiles in Europe if the Russians dismantled their SS-20 medium-range missiles, a proposal that came to be known as the zero option.

Moscow, however, insisted that it should maintain enough SS-20’s to counter the 162 nuclear missiles in the British and French arsenals. The talks faltered, the Americans began deploying new missiles and the Russians walked out.

The position outlined by Mr. Gorbachev today seemed to incorporate aspects of the zero option in calling for the elimination of all Soviet and American rockets first, without any regard in the first stage for the British and French arms. But the experts cautioned that Mr. Gorbachev’s phrasing was broad enough to allow various interpretations, and that dismantling French and British arsenals was envisioned in later stages of his program.

Western diplomats thought it likely that Mr. Gorbachev’s purpose in including new language on the medium-range missiles in a speech otherwise so broad and general might be to elicit a preliminary response from the West before making the proposal specific in Geneva.

In addition to outlining a deadline for disarmament, Mr. Gorbachev said the Soviet Union would extend for three months the moratorium on underground nuclear tests that was announced last summer.

The Russians had made continuation of their self-imposed ban past Jan. 1 conditional on American participation, but Washington refused on the ground that it had weapons to test.

Mr. Gorbachev depicted the three-month extension as a gesture of good will, but warned that the Soviet Union ”cannot display unilateral restraint with regard to nuclear tests indefinitely.” He said that if the United States agreed to join in the ban, the Soviet Union would agree to ”appropriate verification” by methods including ”on-site inspections whenever necessary.”

The problem of verification is most often cited by Washington in seeking agreements with the Soviet Union. Commenting on the extension of the moratorium, however, Western experts noted that Soviet tests would not have been scheduled before spring.

The bulk of Mr. Gorbachev’s statement dealt with what he described as ”a step-by-step and consistent process of ridding the earth of nuclear weapons, to be implemented and completed within the next 15 years, before the end of this century.”

He described three stages. The first was essentially the 50 percent reduction in nuclear arsenals proposed by Moscow last fall. A condition, set then and repeated by Mr. Gorbachev, was the abandoning by Washington of plans for space-based defense systems.

The first stage also includes the ”complete elimination” of American and Soviet medium-range arsenals in Europe ”as a first step toward ridding the European continent of nuclear weapons,” and the moratorium on nuclear tests.

Mr. Gorbachev said he focused on the United States and the Soviet Union in the first stage ”because it is up to them to set an example for the other nuclear powers to follow.” He added, ”We said that very frankly to President Reagan of the United States during our meeting in Geneva.”

The second stage proposed by Mr. Gorbachev, starting in 1990 and lasting five to seven years, would have other nuclear powers joining in the process while the superpowers continued their disarmament. All nuclear powers would eliminate their battlefield nuclear weapons, or those having a range of 1,000 kilometers (620 miles).

Describing the third stage, beginning in 1995, he said: ”The elimination of all remaining nuclear weapons will be completed. By the end of 1999 there will be no nuclear weapons on earth.”

Addressing the American concern for verification, Mr. Gorbachev said ”special procedures” would be worked out, including on-site inspections and ”any other additional verification measures.”

”In summary,” the statement said, ”we propose that we should enter the third millennium without nuclear weapons, on the basis of mutually acceptable agreements.”

NY Times Article in its original context from January 16, 1986, Section A, Page 1 / Reprinted with Creative Commons – Educational Fair Use

The results of the historic nuclear disarmament offer in the midst of the Cold War — and then negotiations and counter-offer conditions by both sides, including verification protocols, led to nuclear weapons control agreements that can be seen now….

Look at the record…. 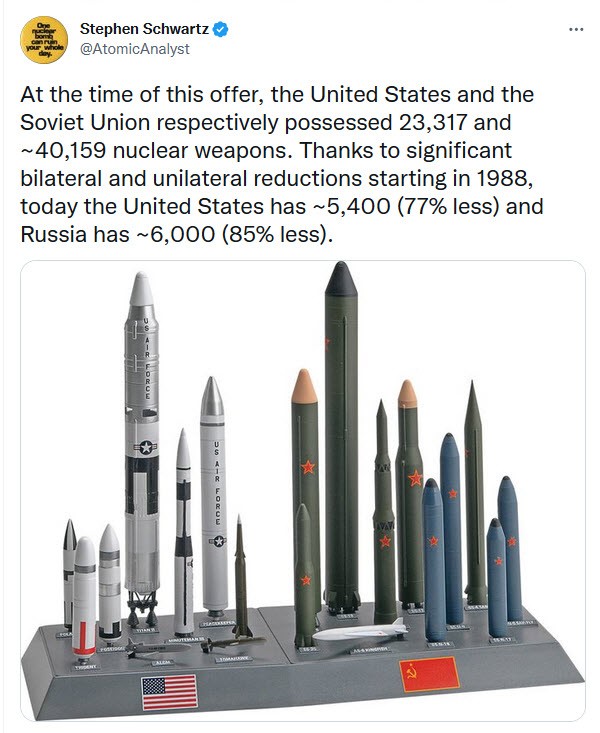 Turning away from generational escalation is possible. The solutions must address, as we have proposed before the Ukraine conflict, mutual security and new definitions of national security…. 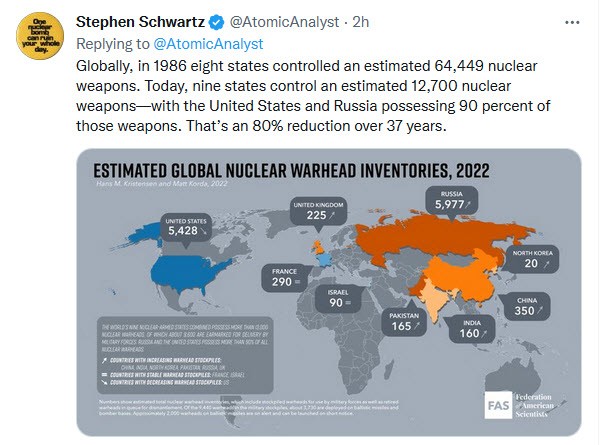 All that is missing is will to make moves that are not escalations with new nuclear weapons. The ratcheting up cannot continue. China, Russia, the United States, all the nuclear weapons states must consider the heightened nuclear threat before nuclear weapons deliver cataclysmic disaster.