U.S. Military Leaders Say No to Role in Election

“There’s no role for the U.S. military in determining the outcome of a U.S. election.” All 10 living former U.S. defense secretaries issue a warning to Trump over threats to use the military to dispute the election. The president’s loss and denial of his election loss are resulting in a constitutional and potential military crisis

Efforts to involve the U.S. armed forces in resolving election disputes would take us into dangerous, unlawful and unconstitutional territory. Civilian and military officials who direct or carry out such measures would be accountable, including potentially facing criminal penalties, for the grave consequences of their actions on our republic.

Concern over Trump using the military to intervene in the election outcome has grown since September after Trump refused to commit to a peaceful transfer of power. The November election results, rejected by Trump, have led to the loss of some 60 lawsuits the president and supporters have mounted in court cases.

Earlier, in December, Trump’s former national security advisor Michael Flynn appeared on conservative channel Newsmax suggesting that the military be brought in to “rerun” the election.

“He could order the, within the swing states, if he wanted to, he could take military capabilities, and he could place those in states and basically rerun an election in each of those states,” Flynn told host Greg Kelly.

In a recorded phone call, first published by The Washington Post on January 3rd, president Donald Trump  pushes Georgia Secretary of State Brad Raffensperger to “find” votes to overturn the election results after his loss to president-elect Joe Biden. The call was the latest of 18 calls the Republican secretary of state indicated had been made to him by the president’s office.

Read the full transcript of Trump’s call to Georgia’s secretary of state. 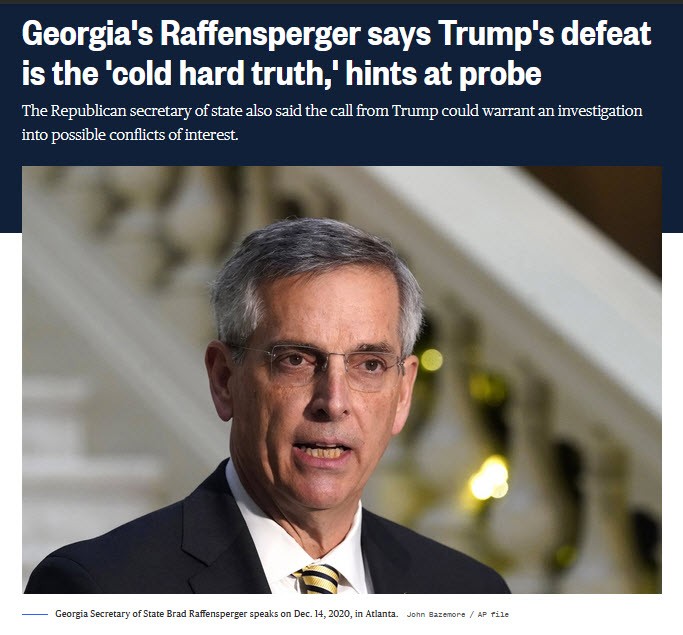