“Waiting to hear from the Kingdom”

Today, September 16, 2019 the US promises to reveal airspace surveillance intelligence. Iraq’s Prime Minister issues statement saying US Secretary of State Mike Pompeo told him attacks on Saudi Arabia, claimed by Yemen forces in the escalating Saudi-Yemen war, had not originated from Iraq

Iran continues to deny attacks on Saudi oil refineries came from its territory, as the US military support for the Saudi regime in the region expands beyond weapons sales in the Yemen war.

US Secretary Pompeo’s war talk comes against a backdrop of failed intelligence in US ‘wars of choice’. How confident is US analysis that the attack was ordered from Tehran? Is this a provocative act on Iran’s part, as in Iran wants war? Or is this, as publicly claimed by Houthi rebels in Yemen, a retaliatory strike after years of Saudi ‘war crimes’ against their country, one of the world’s poorest?

Or are other players involved with other motives? False flag operations or maneuvers beyond the public eye?

Is this another in a cascading series of failed policy decisions in the Mideast? Decades of war, trillions spent, ten of millions of migrants fleeing, astronomical human costs with no vision of peace in sight.

Dueling narratives. A series of coordinated strikes on Saudi Arabia’s oil infrastructure over the weekend significantly inflamed tensions between the United States and Iran, with President Donald Trump on Sunday raising the prospect of military action in retaliation.

But exactly who carried out the strikes, which have crippled Saudi oil production, remains unclear. Iran-backed Houthi rebels claimed responsibility for the attack, but Trump administration officials, including Secretary of State Mike Pompeo, pointed the finger at Tehran. Meanwhile, analysts argue that the Houthis lack the capability to pull off an attack of such sophistication.

‘Massive attack.’ Consensus seems to be building that the strikes came from inside Iranian territory, with a senior Trump administration official telling Foreign Policy that Tehran launched “over two dozen” cruise missiles and drones in total in a “massive attack” against the facilities. For their part, Iranian officials have denied that their military was behind the attack.

Meanwhile, in Israel, an election draws to a close. 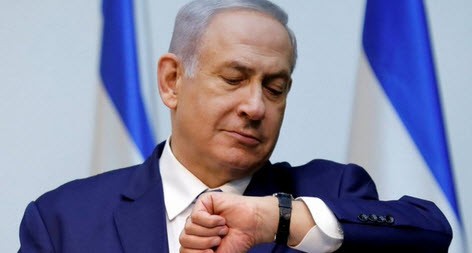 The US/Saudi intelligence promised to be released has yet to be released. The US president goes on record saying he’s ‘in no rush’ to make a decision on next steps, even as his Secretary of State Pompeo declares it is “an act of war.”

We, the public, are left to ask where is the evidence of who is responsible for the attack on Saudi oil facilities?

For years, billions have been spent by Saudi Arabia for US-supplied arms. The Sauds initiated and have pursued a brutal war against Yemen, one of the poorest countries in the world. The rebel forces in Yemen, the Houthi, have claimed to have begin their newest response to Saudi  air force bombing and missile attacks on Yemen, and a naval blockade of supplies described international organizations as leading to the worse humanitarian crisis in the world.

Are the Yemen rebels in the years of war beginning to develop forces to fight back against its adjacent country, Saudi Arabia?

That’s what they are claiming. Of course, the thing about war is the enemy never acts as is predicted.

The other thing to keep in mind, as a pompous Pompeo makes his accusations, is his former role as head of the CIA, and the CIA former role of having ‘botched’ (putting it mildly) the intelligence that led the US into the Iraq war — with the horrific regional consequences that continue to this day. One would think, wouldn’t one, that this time the US intelligence would be solid, but that is not what we (as of yet) see.

In fact, let’s bring a civilian perspective to bear at this point.

While Iran has delivered an official response to the US, denying the charges of the US, in the form of a letter to the Swiss Embassy for the US president and government, the US officially has shown no proof of any ‘flyovers’ of drones or missiles from Iran. Which on its face is very strange indeed, since any missiles or drones would be flying very near the headquarters of the US Fifth Fleet and heavy radar/satellite 24/7 monitoring.

Take a perspective of a neutral news organization:

US intelligence and military sources are briefing American media outlets that the airstrikes were carried out with drones and cruise missiles fired from southwest Iran. No evidence has been presented, as usual from these anonymous and faceless US spooks; the only “evidence” so far are satellite images of the damaged oil installations. Those images are far from conclusive. The attacks could have come from the southerly direction of Yemen.

But here’s the thing. If drones and cruises missiles were launched from  Iran, as the US is claiming, then their flight path would have come within close range of the American Navy’s Fifth Fleet headquarters base in Bahrain which is near to Saudi’s Eastern Province and its oil infrastructure.

The US Fifth Fleet is responsible for “securing” the entire Middle East and in particular the strategically important Persian Gulf waterway where a third of all globally shipped oil is daily transported. It is the world’s premier chokepoint for oil trade.

Is it really plausible that a swarm of drones and cruise missiles allegedly transiting from Iran across the Gulf within a few hundred kilometres of the US Fifth Fleet – with all its warships, radar, satellite and detection technology bristling – were not detected in flight heading for Saudi Arabia?

If Iranian drones and missiles were detected then we can be sure US officials would be blaring the information, categorically pinpointing the incriminating evidence. As it is, American officials and their intelligence sources are so far peddling vague accusations against Iran based on dubious satellite images.

Perhaps less than plausible, perhaps we are talking about straining credulity for Secretary Pompeo to be talking Casus Belli at this point, unless there is more going on here, compartmentalized, than the public needs to know.

Of course, any declaration of war requires approval by the US Congress. The US President is obligated to follow the language of the US Constitution as a starting point.

Beyond the US War Powers Act and any authorization for the use of force, we will see if the UN Security Council and the international community has a say in this latest Mideast challenge, or if US unilateralism in conjunction with Saudi Arabia and Israel, move preemptively.

And on another front, the Israeli election, it seems as of today that the ten years of Benjamin ‘Bibi’ Netanyahu.

The final results are not yet conclusive, but the political strategy of the prime minister to call for a snap election seems to have backfired.

The September Israeli election results are in — and it’s still not clear who the country’s next prime minister will be. But the results are the biggest threat to incumbent Prime Minister Benjamin Netanyahu’s hold on power since he took office in 2009.

With over 90 percent of the vote now counted, the centrist Blue and White party looks to have won the largest number of seats in Israel’s parliament, called the Knesset — 32 out of a total of 120. Netanyahu’s right-wing Likud came in a close second, with 31 seats.

Obviously, neither one of these parties has enough for a parliamentary majority on its own. Which means they will either have to make some kind of power-sharing deal with each other and form what’s called a “national unity” government or else cobble together some kind of coalition out of the seven smaller parties who made the Knesset. The most important of these is Yisrael Beiteinu, a hawkish secular party whose allegiances are very much up in the air. Its leader, former Foreign Minister Avigdor Lieberman, is widely described as a “kingmaker” in the Israeli press.

Is a “national unity” government in the cards? It will be weeks before talks, negotiations, and deals produce an outcome — and even then the outcome could lead to another election.

There is turmoil in the region. It will continue to be in turmoil.

One thing is for certain — another war would be another disaster.