A Legacy of Disaster and Retreat

Today, in one of U.S. President Trump’s 51,282 tweet to his (as of today) 79,517,737 Twitter followers, the president attempted to rescind his acknowledgement yesterday that Joe Biden won the 2020 election. Again claiming the November election was ‘rigged’, the president’s attack on the election is a spectacle of denial and threats 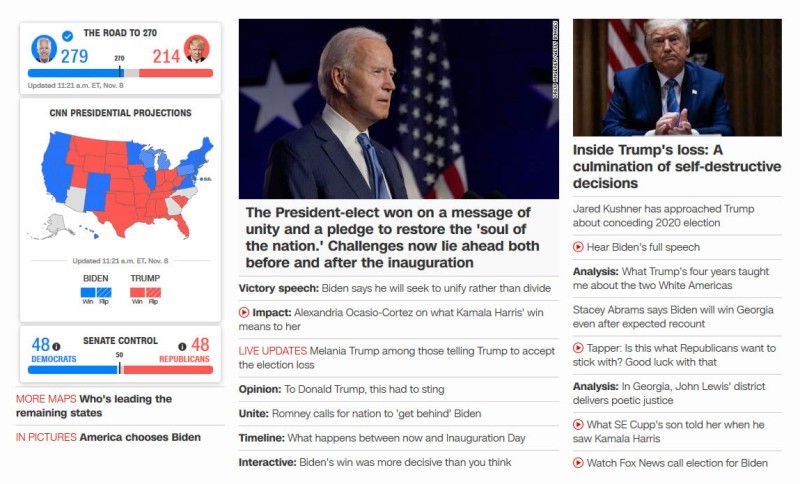 What President Trump Leaves Behind

The Years of the Trump Administration

A Legacy of Anger, Division and Dissent 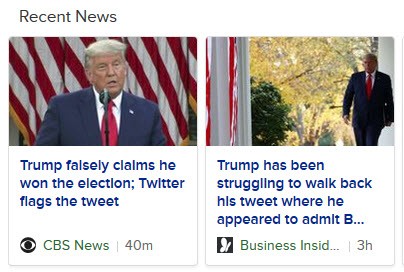 In November 2016 the presidency of Donald Trump, businessman and famed TV personality, began with an unexpected victory.  On his Inauguration Day, January 20, 2017, his inaugural speech started with these words:

Every four years, we gather on these steps to carry out the orderly and peaceful transfer of power, and we are grateful to President Obama and First Lady Michelle Obama for their gracious aid throughout this transition. They have been magnificent.

The tone changed almost immediately as the president announced his vision of the future:

In 2020, we are witnessing an extended conclusion to the November 3, 2020 election and as the president speaks and writes of what he has falsely called a “rigged election”.  He has had his White House staff echo his beliefs, he has had an army of attorneys challenge election outcomes in states across the country, he is attempting what some have called a ‘coup’ as he moves with furious energy to set aside his loss in the general and electoral vote.

This past week has seen the firing of high ranking administration officials, most prominently in the Department of Defense and the U.S. intelligence and security offices as various presidential aides have spoken of “planning” for continuing for “a second presidential term”.

As the president formally refuses to concede the election, or even enable president-elect Joe Biden and his campaign staff to meet with current executive department staff to plan a transition to a new government, a series of immediate, critical security needs go unaddressed, led by a fast spreading coronavirus pandemic.

Biden adviser (Nov. 16): “At present, the Trump administration is not engaging with us on any major components of the pandemic response.” The Biden team is set to inherit a rolling disaster, now averaging 150,000 cases per day.

As the president refuses to allow his coronavirus pandemic officials to meet with the incoming Biden pandemic response team, we have to note that the Biden team is led by Ron Klain, who is also respected as one of the most knowledgeable experts on pandemic response.

The consequences of a breach in communications between the outgoing and incoming administration will impact the national response to COVID-19. The price paid will be seen over the coming months. What is been made obvious is the president has shifted his focus to the results of the election and has mounted a campaign to block and throw out elections results. So far its hasn’t gone good for the U.S. president.

ABC News: “The Trump campaign and its supporters have filed at least 18 cases in battleground states, targeted because the president trailed Democrat Joe Biden by a comparatively narrow margin. With rare exception, the Trump campaign has been losing in court — regardless of whether the judges were appointed by Democratic or Republican presidents. The filings have only garnered two favorable rulings to date, and numerous denials and dismissals.”

The  president’s legal teams have been challenged in every venue, by state officials and judges. In case after case, legal filings have been rejected by courts as case by case the president’s charges of election fraud have been dismissed by judges. As the president calls for new contributions to his campaign, and sets up a new Political Action Committee to use the contributions in multiple ways, the president’s teams of lawyers, litigators attempt to find basis for the cases.

Washington Post / Nov. 16 — Since the election, Trump supporters have been asked to donate to support legal battles contesting his loss, but most of the money has been going to a “leadership PAC,” which can be used to pay for travel, hosting donors and donating to other candidates. https://t.co/kJDg7uHEhR

The U.S. press, including the president’s favorite, Fox News, has refused to go along to get along with the president declaration of victory, and has declared Joe Biden winner of the presidential election. This declaration by Fox earned a swift rebuke and series of threats and attacks by the president. Social media platforms from Twitter, to Facebook, to Google are now tagging and block the president’s daily messaging and an online war of words is ongoing. 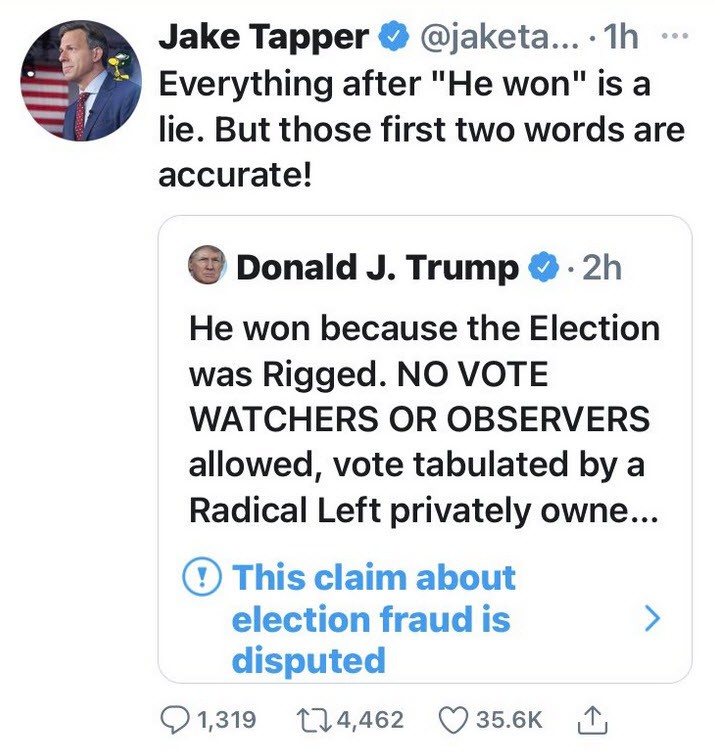 The president the following day added a new tweet, one of a flurry to his followers and to the world.

A president that lost the national popular election by over 5 million votes and lost the state electoral vote 306 to 232, continues to claim a conspiracy against him.

The president and the public are facing a reckoning.

As we read Republican election officials in swing vote states speak of having conducted a historically successful state elections, we see

Is is time to acknowledge the results of the 2020 U.S. election?

We believe so, so let’s join in and speak our piece.

This… the loss of truth as a foundational value

Where we begin our accounting of the past four years

President Trump began his 2016 campaign for election with a broad attack on what he called “fake news”. The definition of “fake news”, we would learn over the years, would proliferate into a war, a political and personal war, he and his allies would wage against more than the U.S. media. The fake news tag has been used to tag most any information deigned to be critical of the president’s policies and performance. Over the years the president has expanded this attack line throughout the body politic. News organizations, one after another, have begun to track the president’s record and the record of the president is a stark record. Four year of mis/dis information, a record of over 20 thousand public statements considered falsehoods and lies by the Washington Post and other groups looking into the truth vs. false statements — fact-finding networks that has been checking, re-checking and reporting on the accuracy of the president’s claims. The president has used his social media platforms, and an unprecedented database of supporters he began to compile in his 2015-16 election to send over 50,000 tweets, and millions more of text messages, and online personalized ads delivered to tens of millions more voter, daily, hourly, 24/7/365. The scope and reach of the president’s online marketing, conducted for years by one his top lieutenants (until his recent arrest), Brad Parscale, dwarfs any online campaign in the history of politics. The messaging — and misinformation — that has gone out to supporters and shared, multiplied and echoed by cable/radio networks such as Fox, have presented a TV celebrity with unprecedented opportunities. The president has take these opportunities and run with them.

The leave behind is stark. A society damaged from bottom to top by a volatile mix of attraction, confusion, anger and fear.

Impact on national and global security

Retreat from U.S. involvement in international efforts to address the #ClimateCrisis

A nuclear arms race version 2.0 with increased tensions and China racing to catch up

“America First” has led to breakdown of international cooperation

US has lost its remaining moral position as a democratic leader

Impact on democratic government in the U.S. and globally

The Future Will Judge the Results

Where does this leave the people of the United States, and nations of the world as they watch chaos in the U.S.?

For certain, the spectacle in the U.S. is in no way delivering additional peace and security.

At the summit of our Strategic Demands list of consequences of 2016-2020, of the Trump administration’s years in office, is a legacy of accelerated global warming — a slow down and collapse of international cooperation to address and deal with the great challenge of our times — climate change. The missed opportunities cannot be recreated.

Here, the NY Times sums up the costs of Trump climate policies…

Trump’s environmental policies, which erased or loosened nearly 100 rules and regulations on pollution in the air, water and atmosphere, can be reversed, though not immediately. Pollutants like industrial soot and chemicals can have lasting health effects, especially in minority communities where they are often concentrated. But air quality and water clarity can be restored once emissions are put back under control.

That is not true for the global climate. Greenhouse pollution accumulates in the atmosphere, so the heat-trapping gases emitted as a result of loosened regulations will remain for decades, regardless of changes in policy.

Trump’s rollbacks of emissions policies have come at a critical moment: Over the past four years, the global level of greenhouse gases in the atmosphere crossed a long-feared threshold of atmospheric concentration. Now, many of the most damaging effects of climate change, including rising sea levels, deadlier storms, and more devastating heat, droughts and wildfires, are irreversible.

“Because global emissions in 2020 are so much higher than they were 10 or 20 or 30 years ago, that means that a year wasted in the Trump administration on not acting on climate has much bigger consequences than a year wasted in Ronald Reagan or George W. Bush or Bill Clinton’s administration,” said Michael Wara, a climate and energy expert at Stanford University.

Analysts say that the past four years represented a closing window in which the world’s largest polluting economies, working together, could have charted a path toward slowing the rate of planet-warming emissions…

“We’ve lost very important time on climate change, which we can ill afford,” said Richard Newell, president of Resources for the Future, a nonpartisan energy and environment-focused research organization in Washington. “There is severe damage. To ignore climate for four years, you can’t put a price on that. It’s a huge issue that needs to be confronted with long-term momentum and extreme dedication, and we have lost that.”