Blip on the Screen – Doomsday Scenario

The “Doomsday Clock” is updated 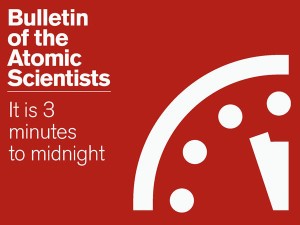 The Bulletin of Atomic Scientists has moved the hands of the clock to three minutes to Midnight, the closest it has been to catastrophe since the height of the Cold War.

Why you might ask? Today’s world is much safer than during the Cold War’s tensions, a nuclear-armed US facing a nuclear-armed Soviet Union… two antagonists whose nuclear weapons were much more widespread and powerful than those deployed in today’s world. Today,  the Soviet Union is no longer in existence – and a series of treaties have reduced the US and Russian Federation stockpiles substantially. Delivery systems of nuclear weapons have been reduced, verifiably reduced.

Given these developments, why would the Doomsday Clock be moved forward even as nuclear arsenals have been reduced?

During the height of the Cold War, the Doomsday Clock was more widely known and discussed. Since the end of the Cold  War, the Clock had gradually moved away from the stroke of symbolic nuclear apocalypse but now, again, the hand of time is swinging back closer to “midnight”, per the scientists’ consensus.

Tens of thousands of nuclear warheads, big thermonuclear bombs at the apex of a chain of ‘little nukes’ to ‘big nukes’ stretched across the planet and a “mutually assured destruction”, MAD policy was reality. Hair-trigger alert systems with only minutes to decide to fire and ‘end it all’ was the harsh, attendant reality and close calls were the order of the day. Many informed commentators later wondered how humanity squeaked by without a nuclear ‘mistake’ that could have (quickly) led to an exchange of nuclear weapons and, without doubt, obliteration of much of ‘life as we know it.’

Many movies touched on this reality, deeply embedded in the psyche and lives of those who lived in the era, the fear that began with the atomic bombing of Japan, then series of next generation nuclear, thermonuclear bombings that wiped out islands in the Pacific, then a succession of mushroom clouds in the deserts of Nevada outside Las Vegas.

The risks of a nuclear flare-up, a ‘flashpoint’, a provocation turning to the firing of one weapons and exchange of many were omnipresent and a generation of children in the US learned to crawl under their desks when sirens sounded. The 1963 showdown between Kennedy and Khruschev put the future of the planet in the hands of two men and the hands of the Doomsday Clock drew perilously close to striking darkness then a flash of the ‘end times’.

The negotiations in the 80s and 90s to wind-down the nuclear age, against a backdrop of the end of the Soviet Union, is now history but the history, as always, is shifting with the present.

The harsh, cataclysmic potential for nuclear war today is seen in a much different light by millions of evangelical and conservative Christians in the US, many of whom believe in so-called ‘Pre-Millenial’, ‘Dispensationalist’, ‘Pre-Tribulation’ viewpoints. Others are called ‘Zionist Christians’ or simply ‘End of Timers’ who believe in biblical interpretations. Other are “Doomsday Preppers”. A popular scenario begins with REVELATION 16, 19-22, another is called the “EZEKIEL 38 Scenario.” These often feature a Rapture, Tribulations, a battle on the Plains of Armageddon (Megiddo north of modern Tel Aviv) and seems far fetched until one comes across how many millions in the US hold on to “the end draws nigh” sentiment… 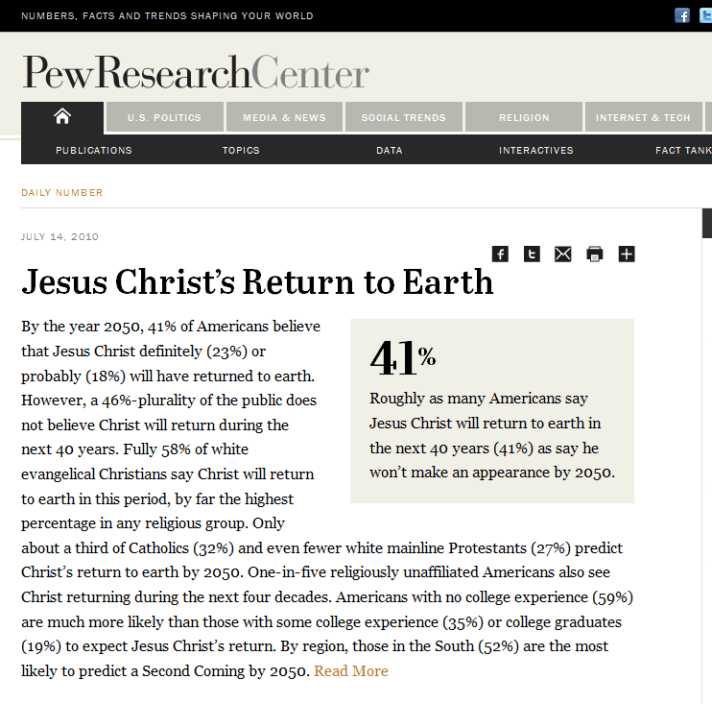 Religious and politics, fervor and miscalculation.

Religious congregations, “the base”, and their leadership were prominent during run-ups to wars in the Mideast.

Neo-conservatives in the US joined with Evangelicals, and a religious fervor in the US pushed Israel and the US closer together.

Yet, the visions of the two countries, on religion, have many variations. The “End Times” vision that drives millions in the Evangelical movement and its branches is not what the average Israeli envisions — or wants.

The political positions of End Times has been studied by scientists — one conclusion is that a belief that ‘it’s all coming to an end’ has a consequential carry over to how much believers tend to care about ‘earthly issues’ (as opposed to those who do not see the world coming to an end due scriptural mandate.) On issues that bring much concern to most citizens of the planet, for example, nuclear weapons proliferation, climate change impact, and the potential for large-scale, human-caused disaster, the religious End of Timers often ascribe to these as ‘God’s decisions’ and, as one of the more prominent conservatives, James Inhofe professes, it is “arrogant” for humans to think that they can be a cause of global climate change or impact world wide ‘natural’ (i.e., controlled by God) systems.

Though it is our belief that environmental security needs to be high on the list of issues that bring national security, it is not ‘high on the list’ of concerns for the average evangelical/pentacostal/conservative Christian in the US.

A recent study, in 2012, indicates that “End-Times theology” is a impacting determinant — and the impact is tens of millions of Americans who are “less likely to support policies designed to curb global warming”. 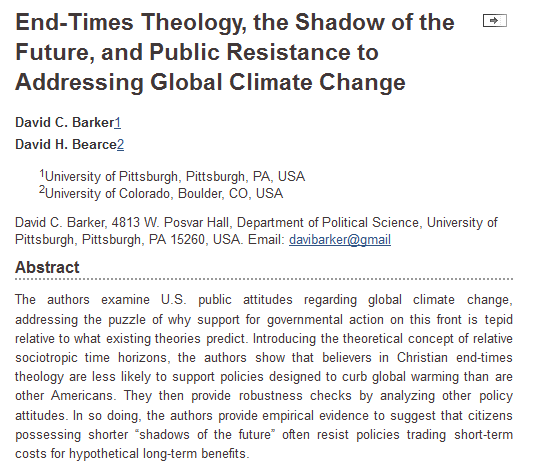 Apart from heavenly interpretations, the risks of nuclear weapons and environmental consequences of global change brought on by human industrial emissions comprise a rising risk horizon that reasoned observers must consider. Next generation usable precision-guided nuclear warheads (e.g., the B61-12), the F-35 (being configured to deliver these weapons) and newly deployed Cruise and submarine-based nuclear-tipped missiles are a reality that is being planned. The results — a China, a Russian Federation and others who will respond are more than ‘blips of a screen.’

WASHINGTON – Climate change and the danger of nuclear war pose an ever-growing threat to civilization and are bringing the world closer to doomsday, a group of prominent scientists and Nobel laureates said Thursday.

“It is now three minutes to midnight,” said Kennette Benedict, executive director of the Bulletin of the Atomic Scientists, as the group moved its symbolic “Doomsday Clock” two minutes forward.

The Doomsday Clock was created in 1947. It has changed 18 times since then, ranging from two minutes to midnight in 1953 to 17 minutes before midnight in 1991.

“And world leaders have failed to act with the speed or on the scale required to protect citizens from potential catastrophe.” The scientists called on people to demand action from their leaders to curb fossil fuel pollution and to stop developing ever more modern nuclear weapons that are endangering the planet.

“We are not saying it is too late to take action, but the window for action is closing rapidly. The world needs to be awakened from its lethargy and start making changes,” Benedict said.

“Efforts at reducing global emissions of heat-trapping gases have so far been entirely insufficient,” said Richard Somerville, a member of the Science and Security Board, Bulletin of the Atomic Scientists, and a distinguished professor emeritus and research professor at Scripps Institution of Oceanography, University of California San Diego.

“Unless much greater emissions reductions occur very soon, the countries of the world will have emitted enough carbon dioxide and other greenhouse gases by the end of this century to profoundly transform the Earth’s climate,” he said, noting that 2014 was the hottest on record and that the tipping point of ice loss in west Antarctica has been reached, meaning the melt is now unstoppable.

The climate changes that human are driving “will harm millions of people and will threaten many key ecological systems on which civilization relies,” he said. The scientists also called for dramatically reduced spending on nuclear weapons modernization programs, and a renewed focus on disarmament.

Benedict said that the world has about 16,300 nuclear weapons, which she described as “far too many.”

While the United States and Russia have far fewer weapons today than they did during the Cold War, the disarmament process has “ground to a halt,” said Sharon Squassoni, member, Science and Security Board, Bulletin of Atomic Scientists, and director of the Proliferation Prevention Program at the Center for Strategic and International Studies.

The United Kingdom has halved its nuclear arsenal stockpile since 2010 but continues to support its nuclear submarine programme.

France is also building a next generation air-to-ground nuclear missile, while China is developing a new class of ballistic missile submarines, she said.

India has plans to expand its nuclear submarine fleet and Pakistan has started a third plutonium reactor and is developing a new short-range nuclear missile.

“Israel reportedly is also modernizing some of its undeclared nuclear forces and North Korea as we all know continues its nuclear programme without any of the restraints previously applied under the Nuclear Non-Proliferation Treaty,” she told reporters.

She said that any post-nuclear optimism that arose at the end of Cold War “has essentially evaporated.”