Where does one start as one attempts to bring reasoned assessment to the news that’s beginning to flow from the G-7? Is the order of the day going to be diplomatic, or provocative? Will the results be welcome, or produce mid- and long-term repercussions with costly consequences? Guess. 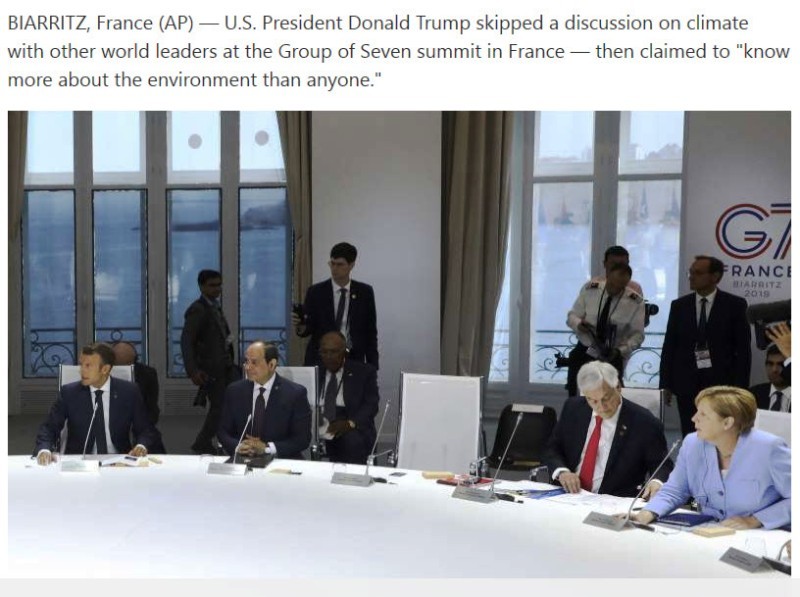 The empty seat at third right was the place reserved for President Donald Trump, who according to Macron had skipped Monday’s working session on the climate. At the same time Macron said that Trump supported an initiative by G-7 countries for an immediate $20 million fund to help Amazon countries fight wildfires and launch a long-term global initiative to protect the rainforest.

The Brazilian government has said it will reject an offer of aid from the world’s wealthiest countries to help tackle aggressive fires in the Amazon rainforest.

The Group of Seven nations pledged roughly $20 million on Monday to help fight the flames in the biodiverse Amazon, in addition to a separate $12 million from Britain and $11 million from Canada.

U.S. President Donald Trump expressed the “complete support of the USA!” for Bolsonaro in a tweet Tuesday morning.

I have gotten to know President @jairbolsonaro well in our dealings with Brazil. He is working very
hard on the Amazon fires and in all respects doing a great job for the people of Brazil – Not easy.
He and his country have the full and complete support of the USA!
10:30 AM · Aug 27, 2019

Brazil’s National Space Research Institute, which monitors deforestation, has recorded that the number of fires has risen by 85% to more than 77,000 in the last year, a record since the agency began keeping track in 2013.

U.S.-based NASA, however, had offered data through mid-August showing that overall fire activity in the entire Amazon basin was slightly below average this year. The agency said that while activity had increased in Amazonas and Rondonia, it had decreased in the states of Mato Grosso and Pará.

In rebuffing the G-7 funding, Brazil’s Foreign Minister Ernesto Araujo said there are already mechanisms under the UN climate convention to fight deforestation.

“Efforts of some political currents to extrapolate real environmental issues into a fabricated ‘crisis’ as a pretext for introducing mechanisms for external control of the Amazon are very evident,” he added in a tweet.

The Bolsonaro administration, in power since January, has favored development by loggers and farmers over conservation, his detractors emphasize.

As the largest of this type of ecosystem in the world, the Amazon is a vital carbon store that slows down the pace of global warming, climate scientists say. Naturally occurring wild fires do happen during the dry season, but some reports, by BBC and other international news outlets, site locals saying there’s been a pickup in deliberately-set fires to clear land for ranching.

Via AFP / Tehran / August 27 – President Hassan Rouhani on Tuesday told the United States to “take the first step” by lifting all sanctions against Iran, dampening down the likelihood of meeting US counterpart Donald Trump.

Foreign Minister Mohammad Javad Zarif said the prospects for such a meeting were “unimaginable” even if the United States rejoins a landmark nuclear deal with Iran.

Trump had said less than 24 hours earlier he was ready to meet with Rouhani within weeks, in a potential breakthrough reached during a G7 summit in the French seaside resort of Biarritz.

Iran’s economy has been battered by US sanctions imposed since Trump in May last year unilaterally withdrew from the 2015 nuclear deal between the Islamic republic and world powers.

“You must retreat from all illegal, unjust and wrong sanctions against the nation of Iran,” Rouhani said.

“The key for positive change is in the hands of Washington,” he said, because Iran had already ruled out ever doing what worries the US the most — building an atomic bomb.

“This concern has already been removed” through a fatwa issued in 2003 by supreme leader Ayatollah Ali Khamenei, he added.

“We don’t (intend to) make an atomic bomb… our military doctrine is based on conventional arms,” said Rouhani.

“So take the first step. Without this step, this lock will not be unlocked.”