Recall that the German Green Party, out in front of some 100 Green parties internationally, led ‘ban the bomb’ opposition to nuclear weapons in Europe in the 1980s. The new German foreign minister, Annalena Baerbock, is a German Green Party leader. Green politics calls … 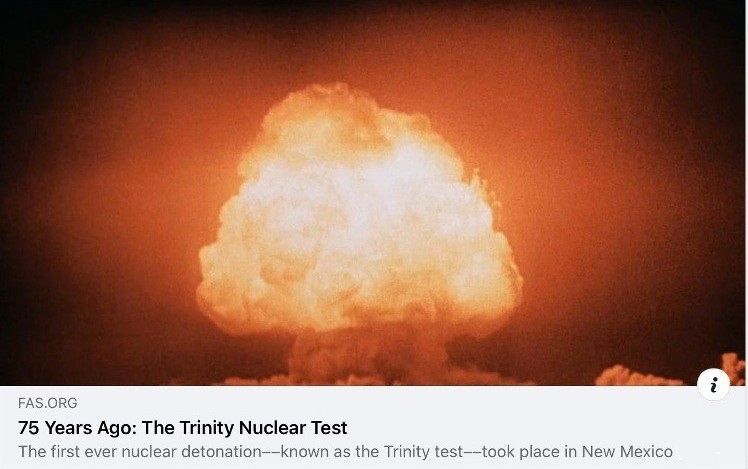 Beginning of the Nuclear Era
Summer 1945 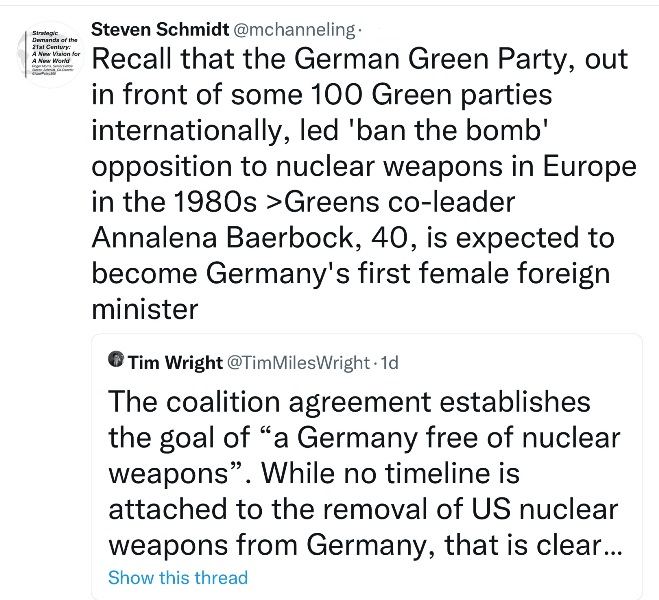 The coalition agreement establishes the goal of “a Germany free of nuclear weapons”. While no timeline is attached to the removal of US nuclear weapons from Germany, that is clearly the ultimate objective.

The agreement states: “As long as nuclear weapons play a role in NATO’s strategic concept, Germany has an interest in participating in the strategic discussions and planning processes.”

But this is NOT, as some have claimed, the same as committing to the continued hosting of US nuclear weapons. Nor is it even a commitment to continue subscribing to the doctrine of extended nuclear deterrence.

Note that all NATO members, with the exception of France, participate in NATO’s nuclear planning group, but only five of them host US nuclear weapons: Belgium, Germany, Italy, the Netherlands and Turkey.

In theory, as the @BanMonitor argues, even a country that has completely rejected nuclear weapons could remain part of NATO’s nuclear planning group simply in order to promote action on disarmament.

The coalition agreement says “we are committed to maintaining a credible potential for deterrence”. But “deterrence” here need not imply “nuclear deterrence”. The omission of the word “nuclear” was almost certainly deliberate.

While the agreement commits Germany to the procurement of a successor system for the Tornado aircraft currently equipped to deliver nuclear weapons from Germany, it is unclear whether the new aircraft will have a “nuclear mission” — or whether they will even be nuclear-capable.

Therefore, supporters of nuclear weapons should not be so confident that Germany will continue to host US nuclear weapons for the duration of the term of the new government. The door is left intentionally open to their withdrawal.

Very strong support remains within the ranks of the Greens and the SPD for the removal of US nuclear weapons from German soil, and such support is likely to increase over time. (see https://www.icanw.de/abgeordnetenerklaerung/)

The soon-to-be foreign minister of Germany, Annalena Baerbock, has repeatedly voiced her support for an end to nuclear sharing. Together with her Green colleagues, she is likely to promote this objective within the coalition. @ABaerbock