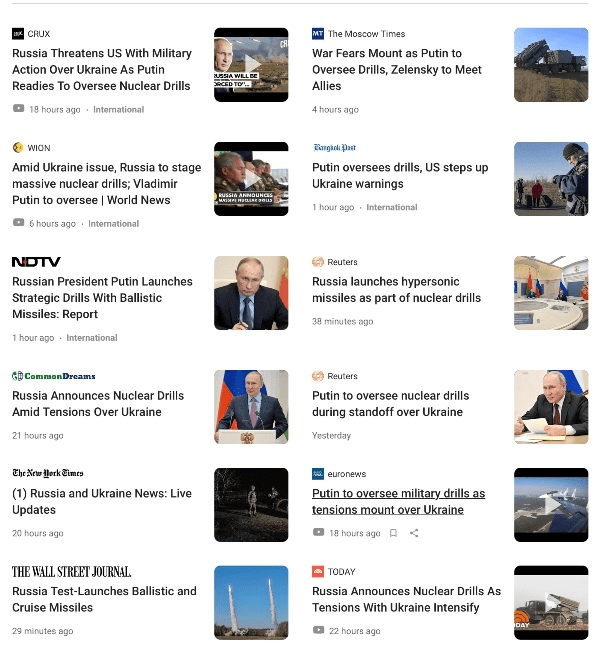 The Russia-Ukraine crisis question of the hour… Where are the strategic/tactical nuclear-capable missiles being ‘drill-demonstrated’ intended to be aimed?

And why the demonstration-escalation now? What is the status of the private behind-closed-doors negotiations as they address the public demands for security, mutual security?

What is going on to have produced this new threat level? Have the threats of new  “modern” and modernized (‘smart’) weapons systems and nuclear-capable missiles and delivery systems systems being designed, developed and deployed produced counter-measures as drumbeats of war? Is a new nuclear weapons race being rolled out, a gathering of dark clouds and rumblings as StrategicDemands.com uploads this warning missive in the final days of February 2022…

“We cannot forever offer an olive branch while Russia conducts missile tests and continues to amass troops,” said the president of the European Council.

After a call with French President Emmanuel Macron, Putin blamed Ukraine for the escalation at the contact line and NATO for “pumping modern weapons and ammunition” into Ukraine. 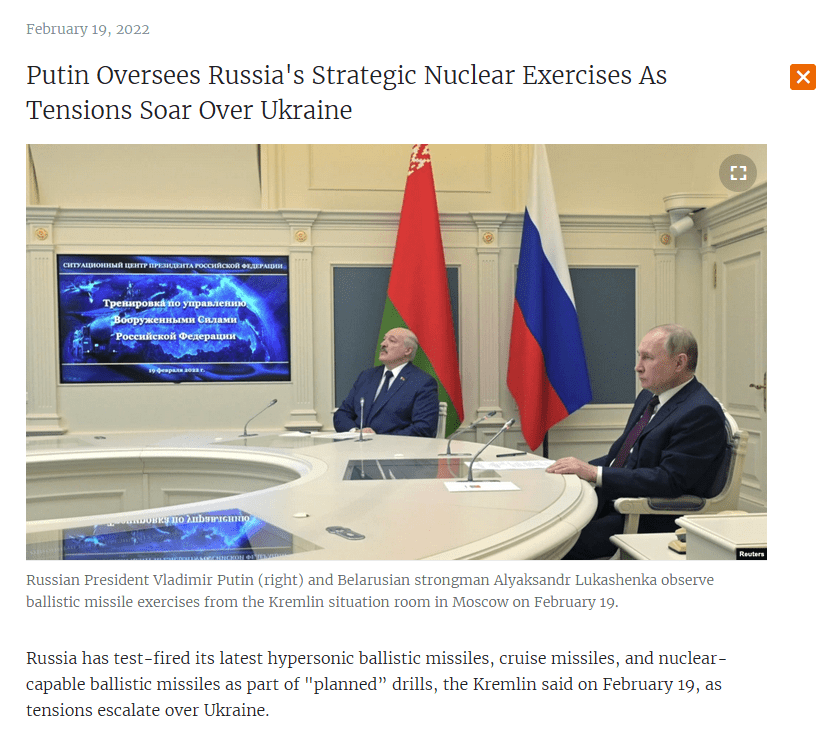 drills by Russia’s nuclear forces that involved its latest hypersonic and cruise missiles.

A top Russian diplomat has warned that Moscow will respond “militarily” and deploy tactical nuclear weapons, if NATO does not guarantee an end to its eastward expansion.

His remarks raise the stakes even higher in the confrontation between Russia and Western powers just days after U.S. President Joe Biden and Russia’s Vladimir Putin held a two-hour video conference aimed at defusing a burgeoning crisis over Russian military movements near Ukraine’s borders, where the Kremlin is estimated to have amassed around 100,000 troops.

Deputy Foreign Minister Sergei Ryabkov’s threat comes amid rising fears that Putin is considering a further military incursion into Ukraine… Following the call between Johnson and Putin, Ryabkov told the state-run RIA Novosti news agency Russia’s “response will be military,” if NATO continues to arm Ukraine. “A lack of progress towards a political-diplomatic solution would mean that our response will be military and military-technical.”

“There will be confrontation,” he added, saying Russia would deploy weapons previously banned under the Intermediate-Range Nuclear Forces (INF) Treaty, an arms control deal struck in 1987 by then US President Ronald Reagan and Soviet General Secretary Mikhail Gorbachev.

The fact is that any nuclear weapons usage inherently has strategic implications even if is used on the battlefield as a tactical weapon.

While non-strategic nuclear weapons are sometimes referred to as “tactical” nuclear weapons, the term is a misnomer. In reality there are tactical and strategic effects that a can weapon deliver…

“A nuke is a nuke,” retired Lt. Gen. David Deptula, a former Air Force intelligence chief and current dean of the Mitchell Institute told The National Interest. “No such thing as a ‘tactical’ nuke. The terms ‘tactical’ and ‘strategic’ refer to outcomes or effects, not material things like aircraft or weapons.”

Arms control and non-proliferation experts also agree on that point.

“I do not like the term tactical because it implies short-range. Better to talk about non-strategic — i.e., those that are not covered by START [Strategic Arms Reduction Treaty] or INF [Intermediate-Range Nuclear Forces],” former Soviet and Russian arms control negotiator Nikolai Sokov, now a senior fellow at the James Martin Center for Nonproliferation Studies at the Middlebury Institute of International Studies at Monterey.

Designed to be delivered in tactically and/or strategically… e.g., radar-evading stealthy, reconfigured F35A’s

A Popular Mechanics article, also published in Yahoo News, quotes Pentagon sources as saying the new F35A capability gives the US flexibility to deliver nukes to targets in a country threatening the US, and also to recall them up to the last second before dropping the weapon since the plane would be piloted. But this supposed advantage of a manned delivery system being recallable is a fantasy.

As Daniel Ellsberg has exposed in detail in his 2017 book The Doomsday Machine, written based on his decades of work with a top security clearance on behalf of the Secretary of Defense office investigating command-and-control procedures and practices of the nation’s nuclear forces, there is no way to guarantee that a pilot ordered on a nuclear strike mission will receive — or believe — any message or signal ordering a cancellation of the attack order.

… the policy of extended deterrence is alive and well, but meeting the NPR’s guidance over the long run will hinge on success with the F-35 and the B61 bomb refurbishment.

The B61 is of the variable yield (“dial-a-yield” in informal military jargon) design with a yield of 0.3 to 340 kilotons in its various models.

Gen. James E. Cartwright, a retired vice chairman of the Joint Chiefs of Staff who was among Mr. Obama’s most influential nuclear strategists, said he backed the upgrades because precise targeting allowed the United States to hold fewer weapons. But “what going smaller does,” he acknowledged, “is to make the weapon more thinkable.”

The B61 Model 12, the bomb flight-tested last year in Nevada, is the first of five new warhead types planned as part of an atomic revitalization estimated to cost up to $1 trillion over three decades. As a family, the weapons and their delivery systems move toward the small, the stealthy and the precise.