Time to talk or time to move beyond negotiation and diplomacy? This week delivered another ratchet up of tensions along the Russian-Ukrainian border — and beyond. Germany foreign minister, Annalena Baerbock, a leader of the Green Party in a newly installed coalition government, meets with Russia’s foreign minister, Sergey Lavrov

War Between Russia, Ukraine, NATO, US?

Joe Biden and Vladimir Putin: Step back from the brink 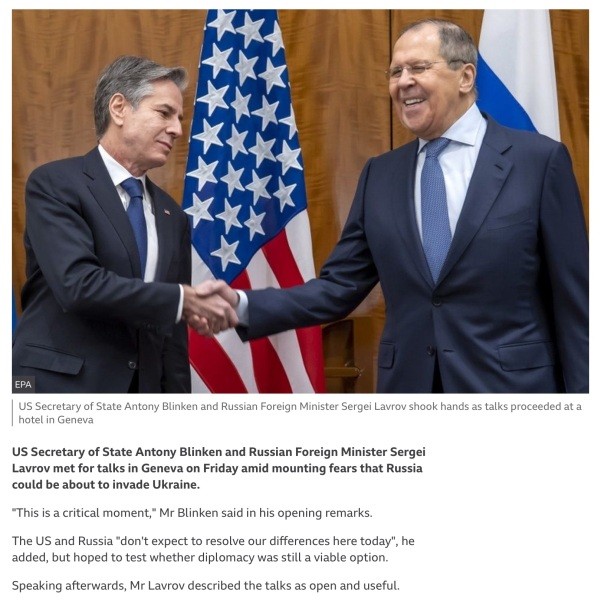 Strategic Demands: One core question — which direction will the new German government take the country on the geo-strategic front?

Throughout Europe, the Mideast and Near East, the East and across the Pacific to the Atlantic and across the ocean, the geo-politics and strategic moves of the nuclear-armed states are of life and death consequences.

In the coalition government, Social Democrats (SPD) and the Greens have different ideas on foreign policy issues. For instance, while the SPD takes a diplomatic line and defends the Nord Stream 2 project, the Greens represent a more values-based foreign policy. Therefore, the meeting between Baerbock and Russian Foreign Minister Lavrov will not only be important for Europe, but also decisive for the line that will determine German foreign policy. – Yunus Mazi/Yenisafak News Service

“Baerbock, who was making her first visit to the Russian capital as foreign minister from the Green party in Germany’s new governing coalition, maintained steely composure throughout the encounter as she accused Russia of refusing to adhere to common rules, and challenged Lavrov on the jailing of the political opposition leader Alexei Navalny, and the shuttering of Memorial, a venerable human rights organization.”

No agreement between the parties is publicly on the table. Meetings continue to break down while the politics, the political players and their positions on a chess board can only be speculated apart from what the public hears and views.

Hardliners in Russia press their strategy and ‘the West’ — the U.S., NATO, Germany, U.K., and France at the tip of the spear — threatens responses and reprisals (quote: “nothing is off the table”) if Russian forces, now massed at Ukraine’s border, press forward with military force.

The Belarus foreign minister blames the West, assorted voices in the West blame the East.

US Secretary of State Antony Blinken is in Ukraine today as news of a Russian invasion grows. Blinken will meet with Russian officials Friday in Geneva.

In the background of the multiple strategic and tactical moves is the 1994 Budapest Memorandum on Security Assurances, in which Russia promised to respect the territorial integrity of Ukraine, among other former Soviet territories. In the foreground is the recent Russian incursion into Ukraine and annexation of Crimea, following the overthrow of the pro-Russian Ukrainian government.

In the mid-ground is the fall of the Soviet Union and replacement by the Russian Federation in the 1990s, which came with ‘assurances’ from the West, according to Russian statements and diplomatic agreements, that NATO would not expand to threaten Russian national security.

NY Times: The Russian leader telegraphed that approach himself by warning repeatedly in the past year that if the West crossed the ever-shifting “red line” that, in Mr. Putin’s mind, threatens Russia’s security, he would order an unexpected response.

“Russia’s response will be asymmetrical, fast and tough,” Mr. Putin said last April, referring to the kinds of unconventional military action that Russia could take if adversaries threatened “our fundamental security interests.”

The definition and extent of Western moves to expand NATO that would, in fact, threaten Russia’s “fundamental security interests” is at the center of the dispute and limits and “red lines” have yet to be mutually agreed upon.

The facts on the ground, the movement of missiles and tactical nuclear capabilities, the forward positioning of forces, strike times of delivery systems — all are in dispute.

As if to send a message about vulnerability, Russian president Vladamir Putin last month threatened to move mid-range nuclear missiles toward Europe and a Russian threat this past week involved ‘how would you feel if we moved nuclear missiles into close proximity to the U.S.’?

Reporter: “Should Americans be prepared for the likelihood to see American forces on the ground in the region in the event that Russia does invade?”

Saber Rattling by Russia, Ukraine, NATO and the US