War in the Ukraine

February 24, 2022: And so it starts with a Russian President speech, then tanks roll, planes attack, bombs fall, Russian troops move into Ukraine… diplomacy collapses, a campaign of war commences with a warning of “consequences you have never seen”

War in Ukraine, War on Ukraine

Thousands of civilians take up arms to help defend the capital

Intense street fighting across the capital

Latest Western intelligence reports indicated that the Russian advance had been slowed. But the Russian priority remained the capture of Kyiv

Ukraine President Zelensky refuses US offer to evacuate, saying ‘I need ammunition, not a ride’ 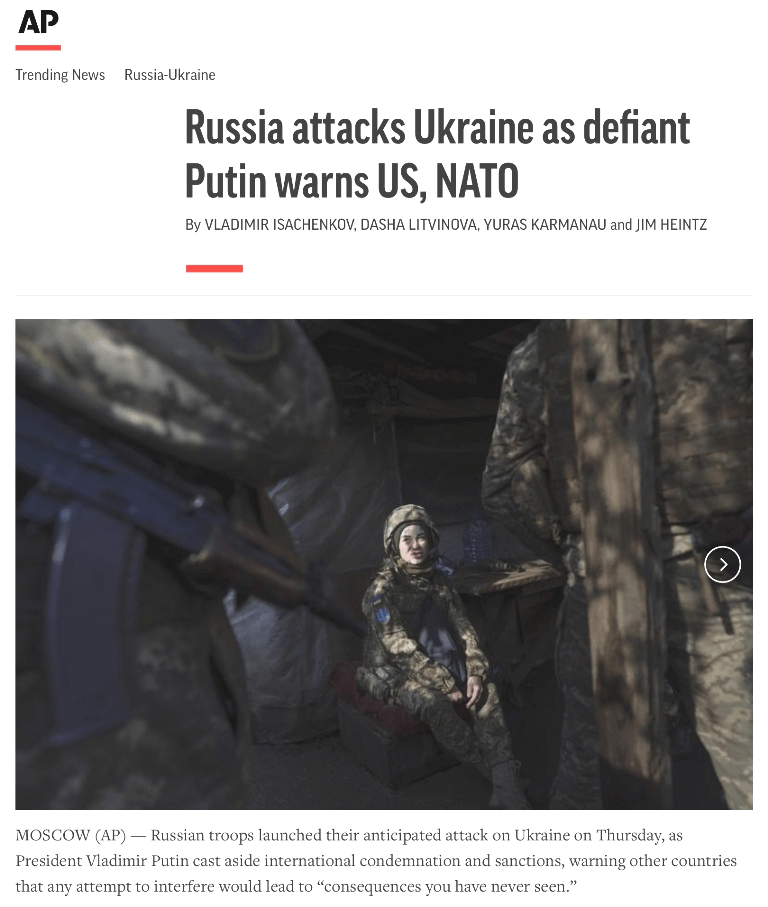 The Ukraine-Russia Crisis and Threats of Nuclear Weapons Use

Rarely in our lifetimes has the world heard more chilling and ominous words: Vladimir Putin said nations “will face consequences greater than any you have faced in history” if they interfere in his invasion of Ukraine.

Why it matters: This is a rare overt threat of nuclear attack…

Putin said in announcing the invasion:

To anyone who would consider interfering from the outside: If you do, you will face consequences greater than any you have faced in history. All relevant decisions have been taken. I hope you hear me.”

After Russian President Vladimir Putin announced he had ordered military action in Ukraine early Thursday, he threatened “those who may be tempted to intervene” on Ukraine’s behalf.

“Now a few important, very important words for those who may be tempted to intervene in ongoing events from the outside,” Putin said.

“Whoever tries to interfere with us, and even more so to create threats to our country, to our people, should know that Russia’s response will be immediate and will lead you to such consequences as you have never experienced in your history. We are ready for any development of events. All necessary decisions in this regard have been made. I hope that I will be heard.”

In a rambling speech early Thursday, full of festering historical grievances and accusations of a relentless Western plot against his country, Mr. Putin reminded the world that Russia “remains one of the most powerful nuclear states” with “a certain advantage in several cutting edge weapons.”

In the context of Russia’s nuclear arsenal, Mr. Putin said, “there should be no doubt that any potential aggressor will face defeat and ominous consequences should it directly attack our country.”

“Suddenly, the ‘unthinkable’ is unfolding before our eyes.” For context, “new deployments of nuclear weapons in Eastern Europe could station US and Russian nuclear weapons closer than at any time in history… this would not be a second Cuban missile crisis but a far more volatile situation.”

In a stark reminder of Russia’s nuclear power, he warned that “no one should have any doubts that a direct attack on our country will lead to destruction and horrible consequences for any potential aggressor”.

The address amounted to a declaration of war on Ukraine, with the aerial bombardment and invasion following shortly afterwards.

A BBC and NYT fact check: Nukes, Proliferation and the Ukraine crisis —