A John Bolton interview. Another warning about command and control of nuclear weapons presents itself. A series of threats, abandoned arms agreements, collapsed diplomacy, escalations and provocations emanate daily in the news. How often, over the years, do we have to be warned of ‘erratic’ decisions delivering catastrophic consequences

As Wolf Blitzer of CNN airs a live interview with John Bolton, former US National Security Advisor, your Strategic Demands editor takes notes. Most striking is Bolton’s repeated warnings of erratic behavior and decisions of the US president. Bolton repeats himself in explaining there is no coherent policy, there is an erratic pattern in “The Room” at the White House.

This bring us to an accelerated nuclear weapons race that the US, under President Trump, initiated. Bolton’s insider story of erratic policy of the president resonates and reverberates. In fact, the consequences of the Trump administration’s nuclear weapons escalation have set a legacy in motion of new nuclear risks on land, sea, in air and in space.

As the daily news cycle and latest chaotic headlines distract and draw attention, a disaster-in-the-making develops.

In the US the coronavirus pandemic grows and response by the Trump administration swings wildly as it deals with the disease. The economy, environment and social spheres are being hit in unprecedented ways. The world’s international relationships are breaking, adding levels of crisis atop crisis.

Today former US Defense Secretary William Perry offers an Op-Ed to US news orgs. It’s titled The Button. Perry describes the book in apocalyptic terms — “the President has the power to end the world in minutes. Right now, no one can stop him.”

Let’s look more closely at this warning from a man who can be said to know more about the US military and national security establishment than any one person.

Let us turn away from the mayhem of the daily news and give Perry’s grave warnings exceptionally close attention.

Who Can We Trust With the Nuclear Button?

The Cold War is over and all presidents make mistakes. Yet they still have sole control over whether to start a nuclear war 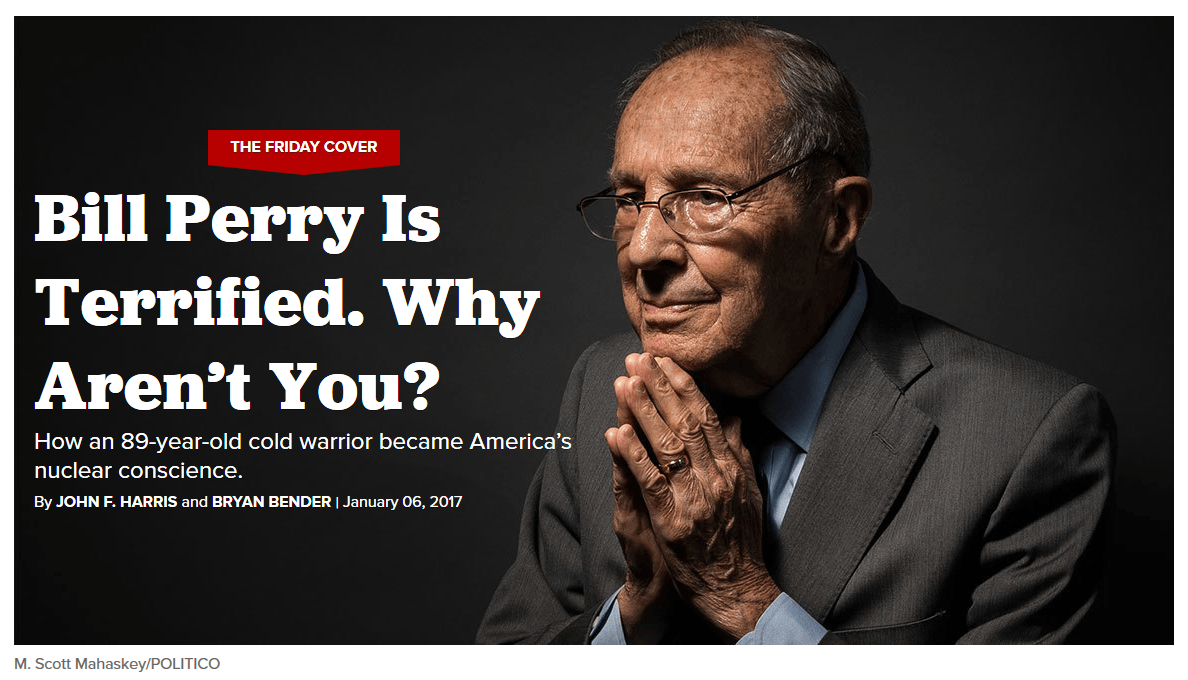 The current debate about how President Trump is abusing his role as commander in chief has an even darker, nuclear dimension. If the president can misuse his authority to deploy troops against peaceful American protesters, might he also mishandle his authority to launch nuclear weapons?

Four years ago, the question of who should be trusted with the unchecked authority to start nuclear war rose to be a top presidential campaign issue. As Hillary Clinton said in a speech in San Diego on June 2, 2016, speaking of her opponent: “This is not someone who should ever have the nuclear codes, because it’s not hard to imagine Donald Trump leading us into a war just because somebody got under his very thin skin.”

That “somebody” turned out to be Kim Jong-un, the nuclear-armed leader of North Korea. In 2017 President Trump vowed to rain down “fire and fury” on the North and later taunted Mr. Kim on Twitter that “I too have a Nuclear Button, but it is a much bigger & more powerful one than his, and my Button works!” That could be interpreted as a threat to launch a nuclear strike.

Unsettling as it may be, Mr. Trump has the absolute authority to start a nuclear war. Within minutes, the president could unleash the equivalent of more than 10,000 Hiroshima bombs. He does not need a second opinion. The defense secretary has no say. Congress has no role. Yet it would mean the end of civilization as we know it.

“There is nothing stopping a nuclear war except for Donald Trump’s brain,” Ben Rhodes, who served as deputy national security adviser to President Barack Obama, says in our new book, “The Button.” “That should be concerning to people.”

Mr. Trump is not the first, and is unlikely to be the last, president to raise these concerns. Giving any president such unchecked authority entails significant risk. There is always some chance that a president, at the moment it matters, may be uninformed and impulsive (like Mr. Trump), drinks to excess (Richard Nixon), or is engaged in some other activity that could cloud his or her judgment. Presidents, like all of us, make mistakes. They are only human.

So, why do we give so much power to one fallible human? It started 75 years ago, when President Harry Truman was shown the devastation of Hiroshima and Nagasaki and determined not to use the atomic bomb again. To him, that meant keeping it out of military hands. So Truman declared that no more atomic bombs could be dropped unless he personally authorized it — and the bomb has not been used since.

But in addition to laudable civilian control, Truman set the dangerous precedent of one-person control. Atomic bombs became “the president’s weapons” and sole authority was reinforced as both the United States and the Soviet Union deployed ballistic missiles that could span the globe in 30 minutes or less.

And the awesome ability to launch hundreds of thermonuclear weapons in mere minutes came with grave dangers. Would any president be able to make a wise decision under such crushing time pressures? What if it was a false alarm? How would the president know?

This is not idle worry. We came close to blundering into nuclear war several times during the Cold War. False alarms, in particular, are a real and growing concern. Dr. Perry experienced a false alarm 40 years ago, on June 3, 1980, when a faulty 46-cent computer chip indicated the launch of hundreds of missiles from the Soviet Union, but luckily that malfunction was caught in time. Today false alarms are even more likely because our weapons and warning systems are vulnerable to cyberattacks like the one the United States conducted against Iran’s uranium enrichment program in 2009. If the president launches nuclear weapons in response to a false alarm, he would start World War III — by mistake.

Luckily, we don’t need to take such risks.

The whole concept of sole authority is built on the false assumption that Russia might launch a surprise first strike. The Cold War ended 30 years ago, and we now know that Russia never seriously considered a first strike against the United States, for the same reason that we never seriously considered a first strike against Russia: it would be national suicide. Both sides have to assume that an attack would provoke an unacceptable nuclear retaliation. Both nations, and much of the rest of the globe, would be obliterated. Starting such a war would be insanity.

With this harrowing reality in mind, President Ronald Reagan and Mikhail Gorbachev, the Soviet Union’s leader as general secretary of the Communist Party, declared in 1985 that “a nuclear war cannot be won and must never be fought.” They were right.

By focusing on an unlikely surprise attack, we are making it more likely that we will blunder into Armageddon. In a crisis situation, the last thing we should want is for the president to feel under pressure to make a quick decision. Maintaining an effective deterrent does not require us to rush into a nuclear war; rather, we need to increase the decision time from minutes to hours.

First: the president should not have sole authority for first use but should share that decision with a select group in Congress. There is no need to make this decision quickly.

Second: The United States should declare that it will never start a nuclear war, and would only use the bomb in retaliation.

Third: The United States should retire land-based ballistic missiles that could force a president into a quick “use-them-or-lose-them” decision. These missiles are not needed for deterrence, which is ensured by survivable submarine-based weapons.

Seventy-five years ago, President Truman gave himself exclusive power over nuclear war. Every president since has clung to it. It was bad policy then; it is inexcusable now. We no longer need to take these risks, and we can safely back away from the brink. It is time to retire the nuclear button. No one should have the unchecked power to destroy the world.

William J. Perry served as secretary of defense in the Clinton administration and Tom Z. Collina is director of policy at Ploughshares Fund. They are the co-authors of the forthcoming book “The Button: The New Nuclear Arms Race and Presidential Power from Truman to Trump.”

Spend Russia and China ‘into oblivion’