Spend Russia and China ‘into oblivion’

As nuclear weapons control agreements have fallen one after another since the Trump presidency commenced, a new US int’l envoy announces a new US nuclear weapons strategy. The Boston Globe quotes Marshall Billingslea: the US is prepared to spend Russia and China ‘into oblivion’. We are now witnessing a new nuclear arms race, a MAD-strategy

An End to New START

Last month, the president’s new envoy for arms control, Marshall Billingslea, threatened to let New START expire and warned that the United States is prepared to spend Russia and China “into oblivion” in order to “win” a new nuclear arms race if they do not agree to a new nuclear deal on Trump’s (as yet undefined) terms.

On May 22, the Washington Post revealed that senior White House officials have discussed the option of conducting the first US nuclear test explosion in 28 years as a way to pressure Russian and Chinese leaders into accepting vague US terms. The proposal was described in the Post as “very much an ongoing conversation” within the administration.

Billingslea announced on Tuesday that he would meet with his Russian counterpart in Vienna on June 22. While it is a positive that they are talking, there is no realistic chance of concluding a new and more ambitious nuclear arms control deal with Russia, let alone China, before START is due to expire. It would be foreign policy malpractice to gamble away that treaty’s important limits on Russia’s nuclear arsenal in a desperate attempt to coerce unilateral concessions from Moscow and Beijing.

Here is how Mr. Billingsley is described by The Guardian.

Billingslea is a former aide to the late Republican senator Jesse Helms, who was a fervent opponent of arms control efforts during the cold war, for example blocking US ratification of the Comprehensive Test Ban Treaty, and campaigning for the US withdrawal from the Anti Ballistic Missile treaty.

“No special envoy, especially one like Marshall Billingslea who has a record of dismantling or blocking effective nuclear arms control, can hope to accomplish very much toward the goal of a wholly new multilateral nuclear arms control agreement through a one-day heads of state summit,” said Daryl Kimball, executive director of the Arms Control Association. “But a decision by Trump and Putin to extend the New Start agreement would surely help prevent a new arms race and create more favorable conditions for more ambitious nuclear arms talks with Russia and China.”

Alexandra Bell, senior policy director at the Center for Arms Control and Non-Proliferation, said: “Now that he has been selected, Mr Billingslea has no time to lose. In less than a year, we could lose the last major treaty constraining the world’s two largest nuclear arsenals.”

Senator Cotton Steps Up in the Senate

Fresh off his ‘Send in the Troops’ call for the president to order the US military force into US cities, the Republican Senator from Arkansas is now orchestrating  an accompanying resumption of nuclear weapons testing. The Senator’s amendment to the National Defense Authorization Act (NDAA) was approved by the Armed Services committee in a straight party line vote, to fund approval for a resumption of nuclear tests. 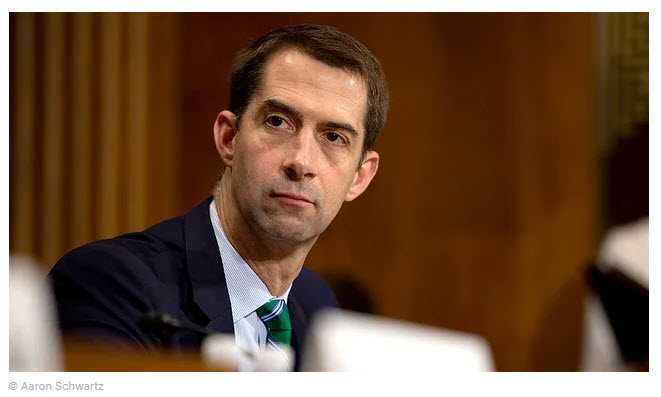 More nukes is MAD-strategy whether called ‘unfathomable’ or called backward thinking, any return to a nuclear arms race would be disastrous. A vast expansion of US nuclear forces, and concomitant expansion of Chines and Russian nuclear forces in response, is a strategy for non-security. Multilateral nuclear proliferation accompanied by a domino-collapse of arms agreements is a nonsense strategy that will deliver no-security.

Strategic Demands looks at history remembering the many ‘close calls’ the world experienced during the Cold War of nuclear saber rattling, how nuke use was threatened and imminent, how close nuclear catastrophe was… who would want a return to the ‘madness’ of the nuclear 50s, 60s, 70s?

New definitions of national security are called for, new strategies are demanded now, not a policy of nuclear madness. 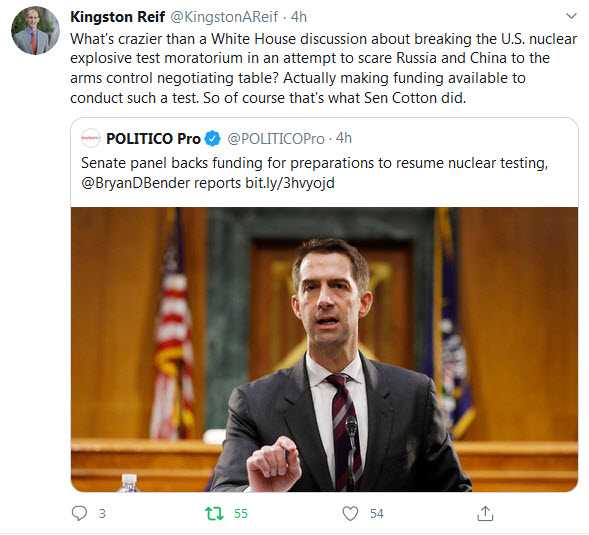 The risks of this proliferation strategy are so strikingly outside a reasoned strategy that we must call for an immediate ‘cease and desist’.

It is not time to supercharge the nuclear weapons arsenals in the US, Russia, China, it is time to turn away from strategic and tactical nuclear weapons that have humanity on a razor’s edge of catastrophe.

Finally, as ‘crazies’ talk of more nukes as better, let’s look at an expert analysis of the administration’s plans to charge up the US nuclear forces. Let’s look at a rational, sane approach to nukes.

Greg and Trish Mello of the Los Alamos Study Group review the US role in global nuclear weapons and envision what a US role must become to move from ‘assuring destruction forever’: