As the international nuclear arms control architecture collapses, the progenitors of nuclear weapons control meet up at their annual DC confab to talk of strategic issues and academically shake their heads witnessing a descent toward a nuclear precipice … Nukes in the new era of proliferation … 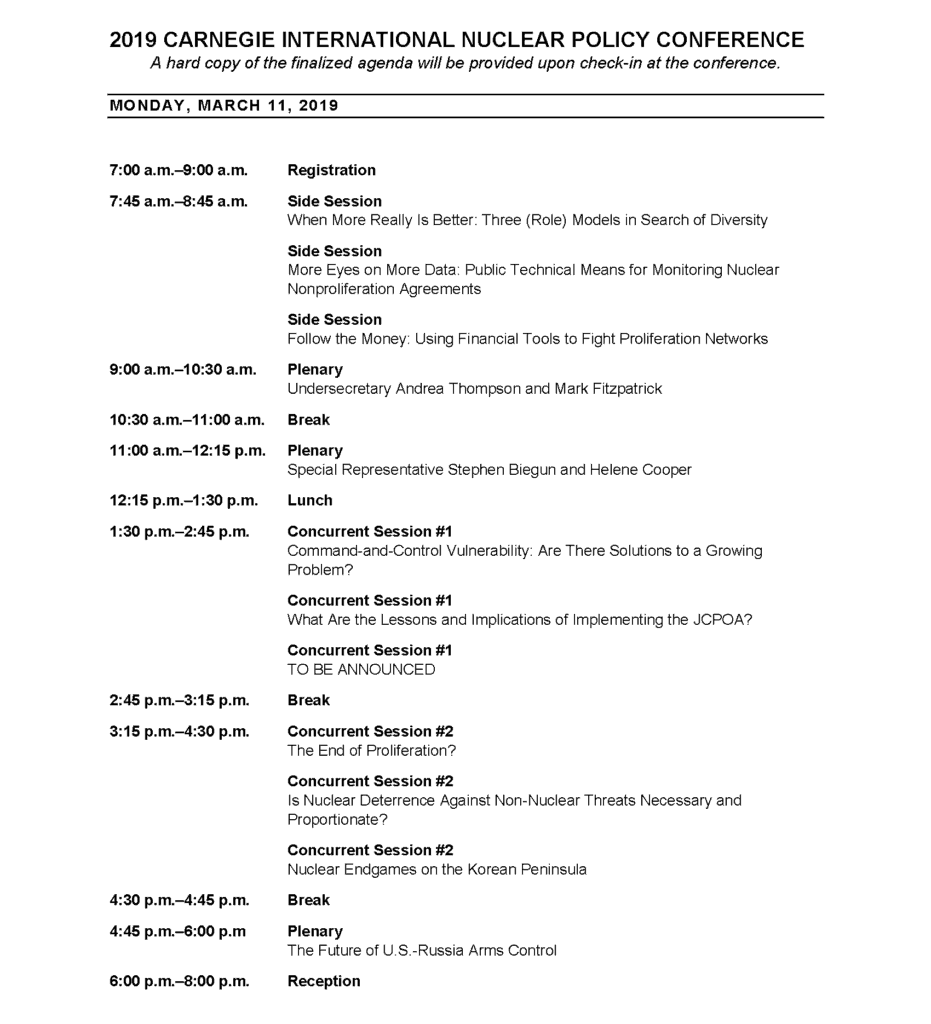 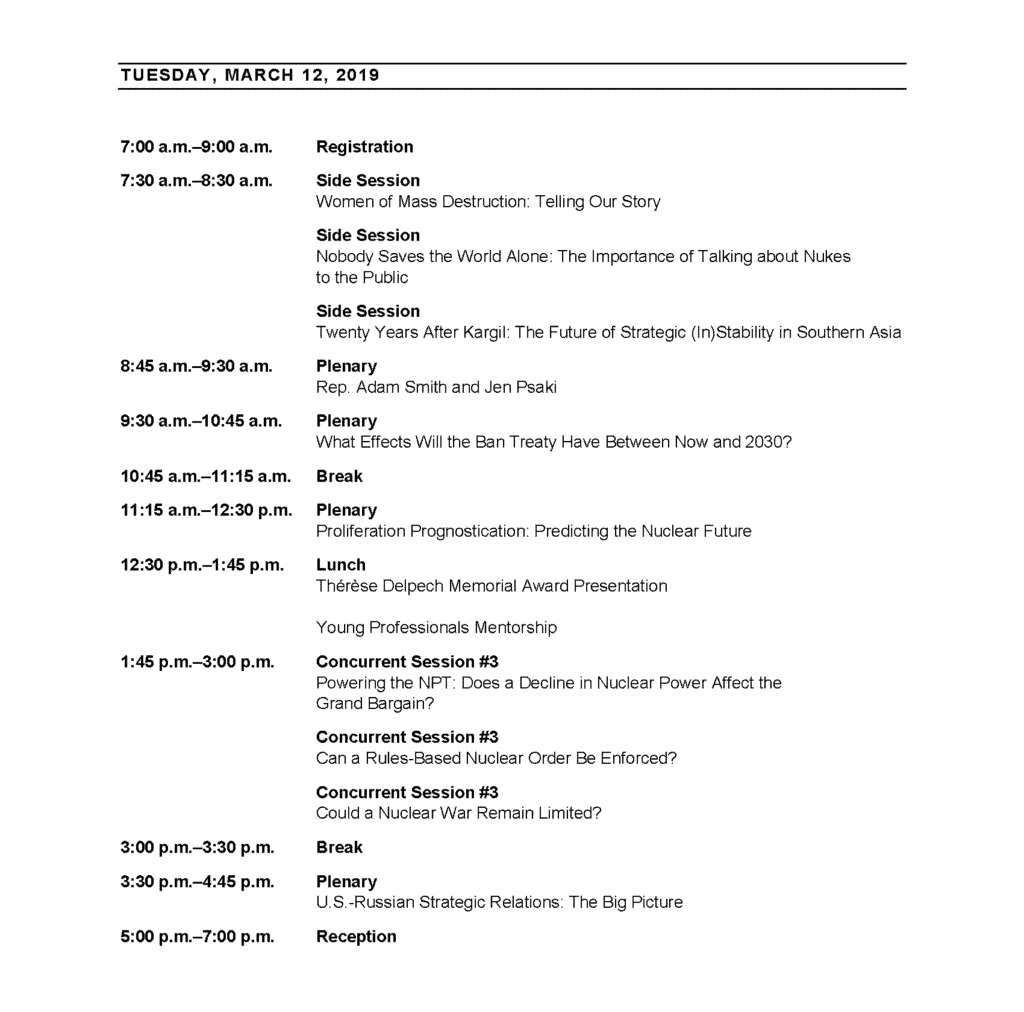 News from the Conference

“I would like to kill the low-yield nuclear weapon, I don’t think it’s a good idea, and we’re going to try to do that,” Rep. Adam Smith (D-Wash.) said at the Carnegie International Nuclear Policy Conference.

Smith also indicated he would like to change language that has been in the National Defense Authorization Act (NDAA) for years that prohibits military-to-military cooperation between the United States and Russia.

The language was first added to the bill after Russia annexed Crimea in a move considered illegal by the international community.

Smith expressed concern that the provision is preventing communication to avoid a “Dr. Strangelove”-type scenario.

“We should reopen the military-to-military conversation,” Smith said. “There’s the speculation that Russia has a policy of escalate to deescalate, the idea that they’ll use a low-yield nuke in a conventional war thinking that … they’ll win the war, but it will be a low enough yield nuclear weapon that nobody will do anything. And one of the things I would like to communicate with the Russians is, it doesn’t work that way.”

Smith also stressed he is opposed to completely eliminating the U.S. nuclear arsenal.

“You cannot unring the bell,” he said. “And as long as that technology is out there, we need to be in a position to deter anyone from using it. And the only way to deter them is to have a nuclear deterrent.”

(Via CNN) The US special representative for North Korea said that the United States will not accept a phased denuclearization by Pyongyang and maintained that the two nations remain closely engaged despite the collapse of the Hanoi summit in late February.

“Let me start by saying the obvious — that diplomacy is still very much alive,” Stephen Biegun said at the Carnegie International Nuclear Policy Conference in Washington, DC. “While we haven’t made as much progress in the six months as I would’ve hoped coming in on the first day, we stay closely engaged with our counterparts in North Korea.”

Biegun, speaking less than two weeks after President Donald Trump and Kim Jong Un failed to reach any sort of agreement in Hanoi, suggested that the ball was in North Korea’s court to negotiate in a meaningful way around the issue of denuclearization.

“We’re just not there on denuclearization, and that was the issue at the summit that really challenged us to move forward with a more complete agreement…” 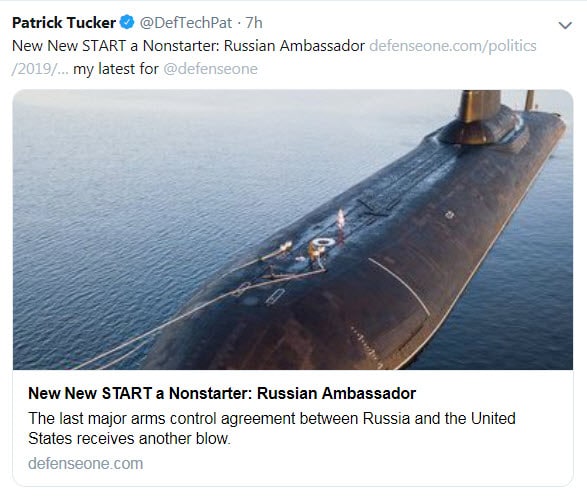 “I want, ideally, all nuclear weapons to be part of New START, not just the ones that are in the Treaty now,” Gen. John Hyten, the head of U.S. Strategic Command, told the Senate Armed Services Committee in March.

Some have argued that renewing New START without extending the types of weapons it covers would be “a gift” to the Kremlin.

Anatoly Antonov, Russia’s ambassador to the United States, said that was a nonstarter. “We have to stick with the provisions of the Treaty,” Antonov said at the Carnegie Endowment’s nuclear policy conference.

The ambassador declared that any discussion of weapons not currently in New START should be part of a separate discussion about other issues.

Return to the “Dead Hand”

“If the new US missiles are deployed in the Baltic countries or Poland their flight time to Russia would be three or four minutes,” Sergey Rogov, Director of the Institute for US and Canadian Studies, said at the Carnegie International Nuclear Policy Conference in Washington.

Rogov added that the end of the INF treaty and deployment of “low yield” intermediate nuclear cruise missiles in Europe would make Russian early warning systems redundant, forcing Russia to rely on carrying out a pre-emptive strike against US weapons, or return to the cold war Perimeter defense system, otherwise known as the “Dead Hand” as it triggered an automatic nuclear response to an attack on Russian command and control systems. 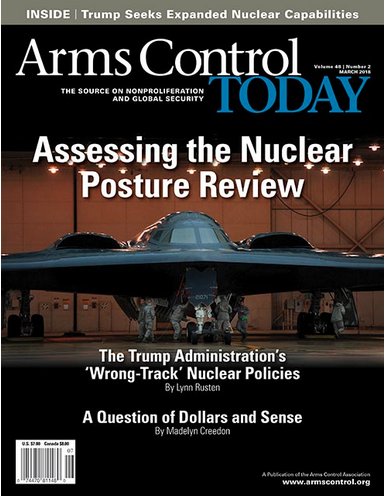 The reality is that the U.S. is pushing a race toward a next generation of nuclear weapons. Pit production, those enriched cores that are the dragon’s heart in the parlance of the ‘priests of the nuclear weapons’, now are racing toward a new record of assembly for use in new DVs, delivery vehicles.

In the heartland of the U.S., in Kansas City, Doomsday Dragon Hearts are being engineered, hundreds of billions being spent obeying the dictates of the Nuclear Posture of the Trump administration.

Today, March 11, the Trump budget is announced with a new record for military spending, beyond the requests of the Pentagon and beyond any level of nuclear sanity.

Let us take a look at the words of nuclear experts who for decades have studied and reported on the nuclear weapons complex, the Los Alamos Study Group.

Today, February 12, 2019, President Trump released his fiscal year (FY) 2019 budget request, including his administration’s request for the National Nuclear Security Administration (NNSA), a semi-autonomous agency with the Department of Energy (DOE) responsible for development and production of nuclear warheads and bombs, the development of naval nuclear reactors, and some aspects of nuclear non-proliferation, including the disposition of excess weapons-usable materials such as plutonium (Pu).

The administration is proposing a $1.8 billion (B) increase in NNSA nuclear “Weapons Activities” (WA) spending for FY19, to $11.017 B, exclusive of about about $318 million (M) requested for NNSA warhead administration costs (out of NNSA’s overall administrative request of $423 M).

This is a 18% increase in WA (before correcting for inflation) over this year’s (FY18’s) estimated WA spending of $9.325 B (again, not including warhead administrative costs, which will be about $290 M in FY18).

This is the largest increase in warhead spending, both percentage-wise and in absolute (inflation-corrected) dollars, since 1962, when the US had 25,540 warheads and bombs. In 1962, the US spent $7.16 B (in 2017 dollars) on nuclear weapons research, development, testing, evaluation, and administration (RDT&E, directly comparable to today’s WA if administrative costs are included in the latter). The US has 4,018 warheads and bombs in the active stockpile today.

This works out to $280,000 apiece for the 25,540 warheads in 1962, when the US conducted 96 nuclear tests and was developing many kinds of new warheads and bombs, vs. $2.821 M to maintain and upgrade each of the 4,018 active US warheads today. This is more than an order of magnitude increase in the cost of comparable warhead work, given the great cost of the nuclear testing program then running at an average pace of almost two nuclear tests per week at multiple testing locations.

The Congressional Budget Office (CBO) has estimated that the deployment, maintenance, and modernization of US nuclear weapons over the next 30 years will cost $1.2 trillion (exclusive of hundreds of billions in booked environmental cleanup liabilities). The present NNSA warhead budget is part of that vast sum. (See: Congressional Budget Office: US Nuclear Forces To Cost $1.2 Trillion over 30 Years, Oct 31, 2017.)