The Crisis, Climate Security and US Election

“The Climate Crisis Is Still a Crisis”.

November 3rd,  a turning point election. With former VP Joe Biden currently leading in the polls and Democratic control of the Senate possible, the US may soon have the chance, for the first time in more than a decade, to enact urgently needed legislation to address global climate change 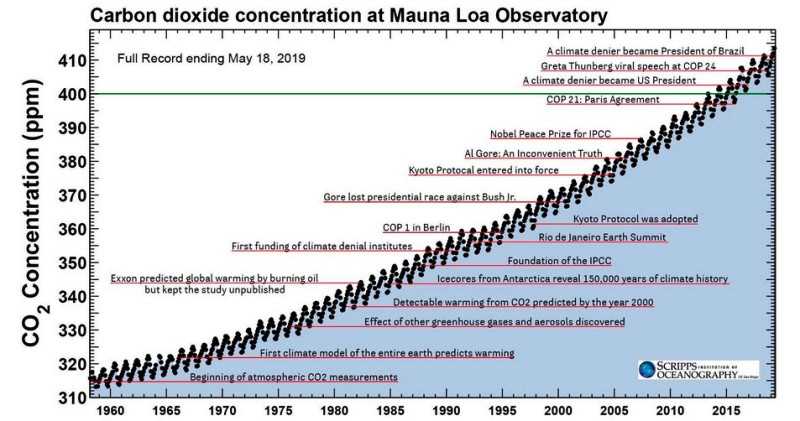 If the fate of American democracy is on the ballot in November, so too is the future of the planet

By David M. Uhlmann / Professor at the University of Michigan Law School

The Atlantic / August 2020
In June 2009, the House of Representatives narrowly passed the American Clean Energy and Security Act, a comprehensive bill to stave off the worst effects of climate change. The landmark legislation died in the United States Senate, however, even though President Barack Obama supported climate action and Democrats controlled the Senate with a filibuster-proof majority. Other major issues took precedence: securing a stimulus package to address the recession, passing the Affordable Care Act, and enacting th Dodd-Frank financial reform and consumer-protection law.

As a result, the United States scuttled its best chance to prevent the havoc of climate disruption. In the ensuing decade, the world hurtled at breakneck speed toward the precipice of climate disaster. The most optimistic scenario now is that we have only a decade left during which we can limit—not prevent—the economic calamity and public-health nightmare that climate disruption will visit upon our children and grandchildren; the worst-case scenario is that we have already passed the tipping point on climate.

Whether we have any chance of avoiding catastrophic climate disruption will be decided this November. The Trump administration rolled back nearly every climate action taken by Obama and will double down on those policies in a second term. The United States will withdraw from the Paris Agreement the day after the November election and will reenter the agreement and pursue urgent climate action only if Biden wins in November.

If the fate of American democracy is on the ballot in November, so too is the future of the planet. It is one more way that the stakes could not be higher in this election.

Yet with a pandemic raging, the economy cratering, and systemic racism finally receiving the attention it deserves, there is considerable risk that a Biden administration and its allies in Congress will follow the lead of the Obama administration and prioritize other pressing issues over the need for climate action. If climate action is not a top priority—and one that results in new laws that commit the United States to decarbonization of its economy and allow it to provide global leadership on climate action—no other accomplishment will matter in the long run.

At this point, the public is so familiar with the acceleration of climate change that it may dismiss the dire warnings as dreary weather reports. The facts bear repeating.

The past five years have been the hottest on record; 19 of the hottest 20 years have occurred since 2001. Polar ice and glaciers are melting. Coral reefs and rainforests are disappearing. Hurricane season comes earlier and more intensely, and every year brings 100-year storms.

If we fail to limit greenhouse-gas emissions by 2030, searing heat, widespread drought, destructive storms, and coastal flooding will become even more common. Rising oceans will envelop coastal cities such as Miami, New York, Boston, New Orleans, and Houston. The Pentagon predicts that mass migration and climate refugees will lead to widespread political instability.

Avoiding this fate should be reason enough for the United States to take decisive action on climate early in a Biden administration. Climate action also will have a significant effect on the frequency of future pandemics and the stability of the economy—and Americans who are Black, Indigenous, and people of color will suffer the worst consequences as climate disruption exacerbates existing economic inequality and magnifies health disparities that plague poorer communities.

Biden appears to understand: He has made clean-energy investment a central plank of his “Build Back Better” platform.

Charts the United States on “an irreversible path” to net-zero carbon emissions by 2050.

Strategic Demands reports that in a conference call Joe Biden tells key supporters that re-joining the Paris Climate Agreement will be his first act as President.

Biden campaign officials have gone on record detailing an aggressive climate and jobs plan which advisers say he would take to Congress “immediately”, if elected president.

Echoing points in the Green New Deal, the new Biden proposal outlines $2tn for clean energy infrastructure and other climate solutions, to be spent as quickly as possible in the next four years, what would be the Democrat’s first term in office. Last year, he proposed $1.7tn in spending over 10 years.

Addressing the economic crisis is going to be priority one for a President Biden,” a senior campaign official told reporters.

“This will be the legislation he goes up to [Capitol Hill] immediately to get done. The reality is we will be facing a country that will be in dire need of these types of investments that are going to be made here.”

”Two crises are converging: a devastated economy and high unemployment that could drag on for years as the nation struggles to gain control of the coronavirus pandemic, and a rapidly closing window to significantly cut heat-trapping emissions and lead on global climate action.”

Biden unveiled the climate plan, the second part of his “Build Back Better” proposal, in remarks from Delaware. 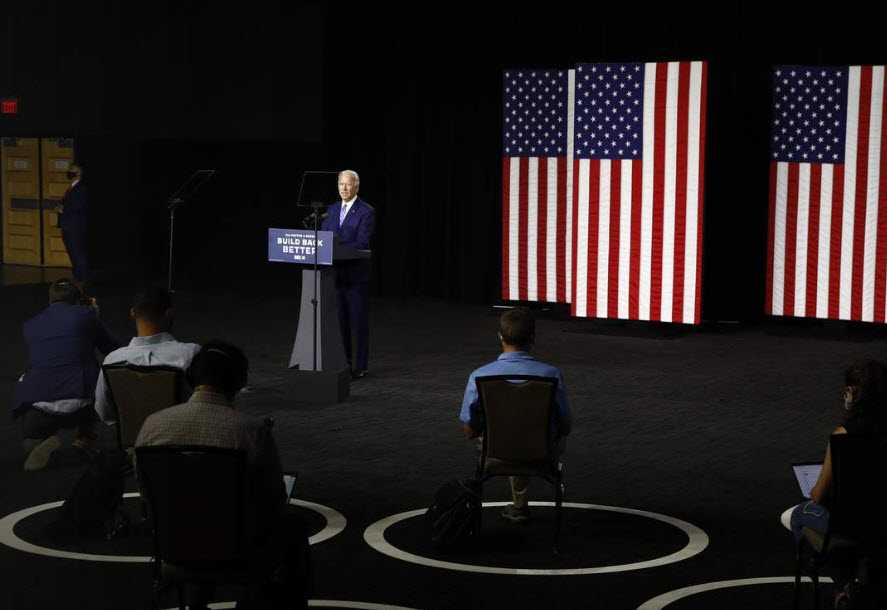 In a detailed climate policy speech, Biden said his proposal would create a million jobs in electric vehicle manufacturing, a million in upgrading buildings and a quarter-million cleaning up after extractive industries. Biden said he would give Americans money back for switching to cleaner cars and making their homes more efficient.

He said he was focusing on his first four years as president because “science tells us we have nine years before the damage is irreversible”.

Biden v Trump on Environment, Climate, and Future — the 2020 election will set the course

Via Reuters / Major climate issues at play in the Nov. 3 election

Joe Biden has pledged to take action on climate change that would be “impossible” for a future president to reverse should he beat President Donald Trump in the November election.”

The former vice president told renewable energy industry executives on a fundraising call Monday night (reported via Newsweek) that he would put down “such a marker” on climate change it would be “impossible for the next president to turn it around.

Speaking about his plan for tackling climate change, Biden said: “God willing I win and even if I serve eight years, I want to make sure we put down such a marker that it’s impossible for the next president to turn it around.”

He stated that the climate crisis was the “most sweeping crisis of all,” adding that it had an impact on other crises facing the U.S., including the coronavirus pandemic and the related economic downturn.

Over 100 environmental protection laws and regulations have been rolled back by the Trump administration. Trump has abandoned international agreements on climate and has moved the US to a position of pariah in global environmental security relations.