Look carefully as the U.S. is declaring what, when, why, where and how the use of Nuclear Weapons is authorized to take place in the new National Defense Strategy and Nuclear Posture. More than anything else focus on how many uses of nukes are authorized as a ‘first use’ of nukes is approved 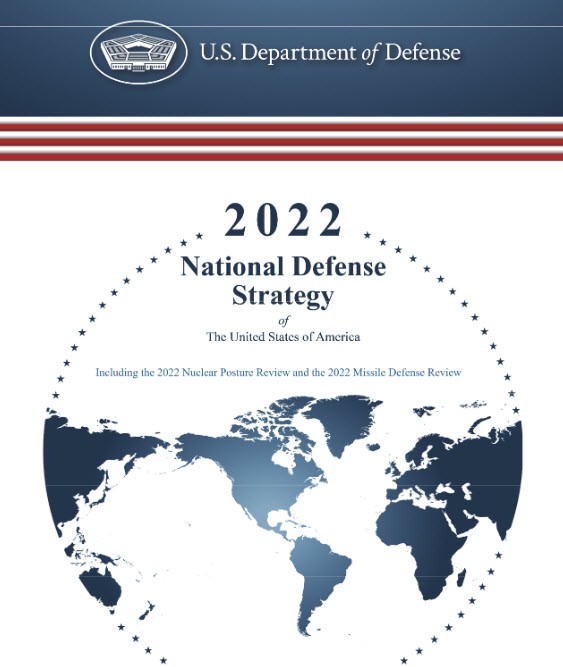 Long-in-development, next-generation, forward positioned with stand-off capable cruise missiles are being carried by F-35 fighter jets. These weapons and radar-evading delivery systems are literally game-changers. They bring new capabilities (not ‘legacy’ capabilities). They can be and should be considered as being able to ‘behead’ enemy ‘command, control and communication’ systems. This in turns narrow the time of an enemy’s response and this, in turn, profoundly increases the risks of any ‘first use/first strike’ ordered. Recall that the U.S. doctrine of preemptive first strikes was expanded at the time of the Iraq war. Now, years later, first strikes continue in U.S. policy menu options  (even as many, including Strategic Demands, have argued for rational changes in policy).

The threat of nuclear first use/first strike brings ‘bristling arsenals’ and any tactical (or strategic) nuclear weapons use multiplies the odds of regional/global mistake/miscalculation and spiraling nuclear disaster. We are not talking hyperbole.

Today, we are witnessing a new Cold War 2.0 that has commenced, a proliferation of nuclear capabilities and a collapse of nuclear arms control architecture.

The current U.S. National Defense Strategy and Nuclear Posture Review is a flawed strategic/tactical document if we are seeking a realistic national security doctrine.

Perhaps it is time to acknowledge the failures of the U.S. nuclear posture, the failure to review the strategy/tactics by a wider community than that of vested interests and the existing nuclear weapons complex.

As the U.S. National Nuclear Security Administration, the Department of Energy, U.S. National Labs complex with Los Alamos National Lab is racing to become the center of next-gen ‘pit’ (nuclear weapons triggers), Strategic Demands sees a deeply flawed national defense strategy. The escalation by the U.S. to ‘modernize’ nuclear weapons with increased production, nuclear weapons spending, distribution of these new nuclear weapons and delivery systems to Allies such as France, the UK, NATO countries and other allies delivers an attendant generational ‘lock in’ and multi-nation proliferation. Nuclear proliferation by any definition, in the face of words not to proliferate, is self-destructive. As Strategic Demands argues, “surviving victory” does not follow from self-destructive policy.

President Biden has missed an opportunity to change direction and reduce the threat of nuclear weapons. The failure to do so as the risks of use of nuclear weapons ratchet up is delivering risks beyond any words in these Secretary of Defense released documents speaking of a “decisive decade”. 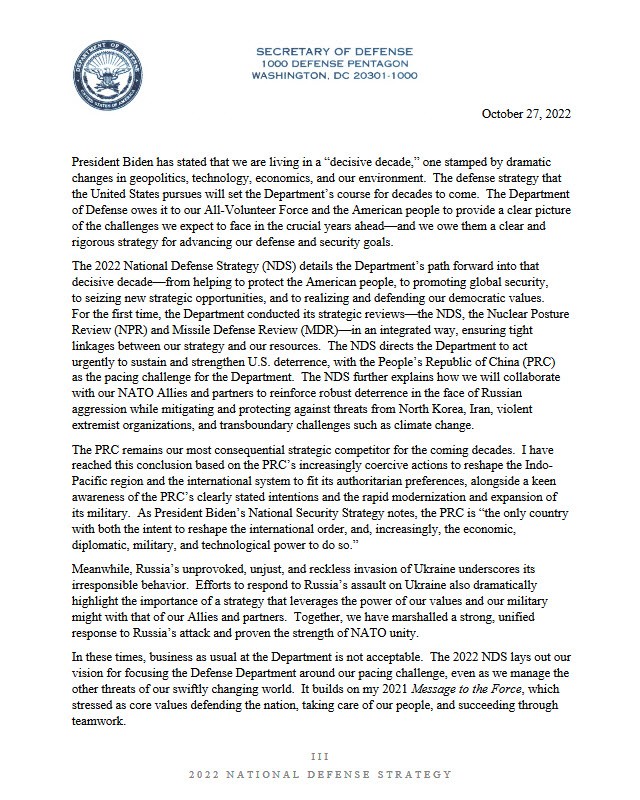 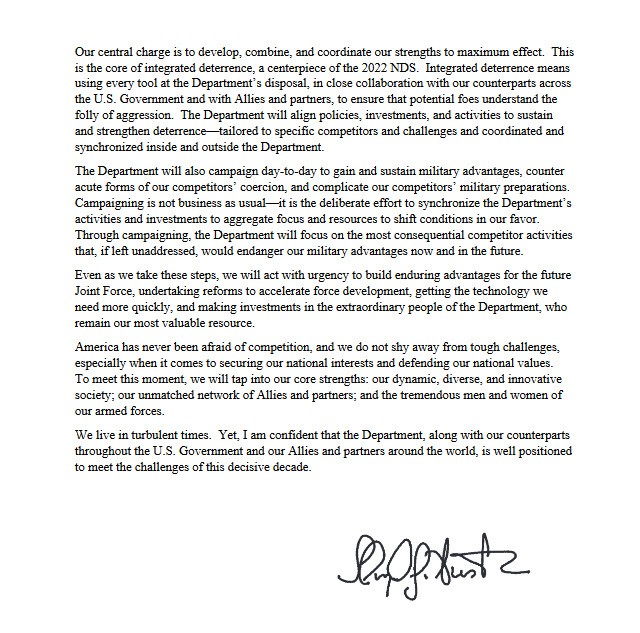 United States nuclear weapons employment guidance is approved by the President, and all nuclear plans are reviewed and approved by the Secretary of Defense. These plans are prepared with advice from the Chairman of the Joints Chiefs of Staff, among other senior officials. Legal advice is integral to the preparation of these documents and includes review of their consistency with the Law of Armed Conflict (LOAC), which is authoritatively stated for DoD personnel in the DoD Law of War Manual. Longstanding DoD policy is to comply with LOAC in all armed conflicts, however characterized, and the DoD Law of War Manual recognizes that “[t]he law of war governs the use of nuclear weapons, just as it governs the use of conventional weapons.” In addition, longstanding U.S. policy is to not purposely threaten civilian populations or objects, and the United States will not intentionally target civilian populations or objects in violation of LOAC…

The United States will not use or threaten to use nuclear weapons against non-nuclear weapon states that are party to the NPT and in compliance with their nuclear non-proliferation obligations. For all other states, there remains a narrow range of contingencies in which U.S. nuclear weapons may still play a role in deterring attacks that have strategic effect against the United States or its Allies and partners.

Declaratory policy is informed by the threat, assessed adversary perceptions, Ally and partner perspectives, and our strategic risk reduction objectives. We conducted a thorough review of a broad range of options for nuclear declaratory policy – including both No First Use and Sole Purpose policies – and concluded that those approaches would result in an unacceptable level of risk in light of the range of non-nuclear capabilities being developed and fielded by competitors that could inflict strategic-level damage to the United States and its Allies and partners. Some Allies and partners are particularly vulnerable to attacks with non-nuclear means that could produce devastating effects. We retain the goal of moving toward a sole purpose declaration and we will work with our Allies and partners to identify concrete steps that would allow us to do so.

Nuclear Weapons in U.S. Defense Strategy. While the United States maintains a very high bar for the employment of nuclear weapons, our nuclear posture is intended to complicate an adversary’s entire decision calculus, including whether to instigate a crisis, initiate armed conflict, conduct strategic attacks using non-nuclear capabilities, or escalate to the use of nuclear weapons on any scale. Our nuclear deterrent thus undergirds all our national defense priorities, including defending the U.S. homeland, deterring strategic attacks against the United States, our Allies and partners, and deterring regional aggression with emphasis on the PRC and Russia. 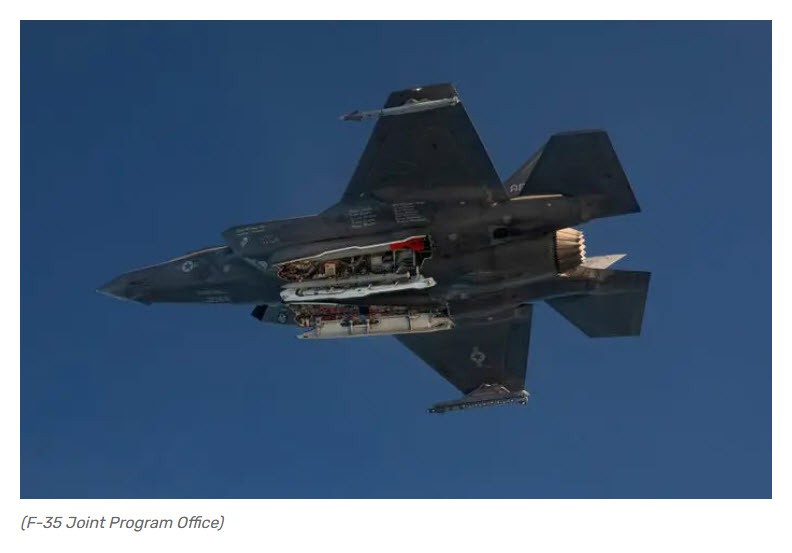 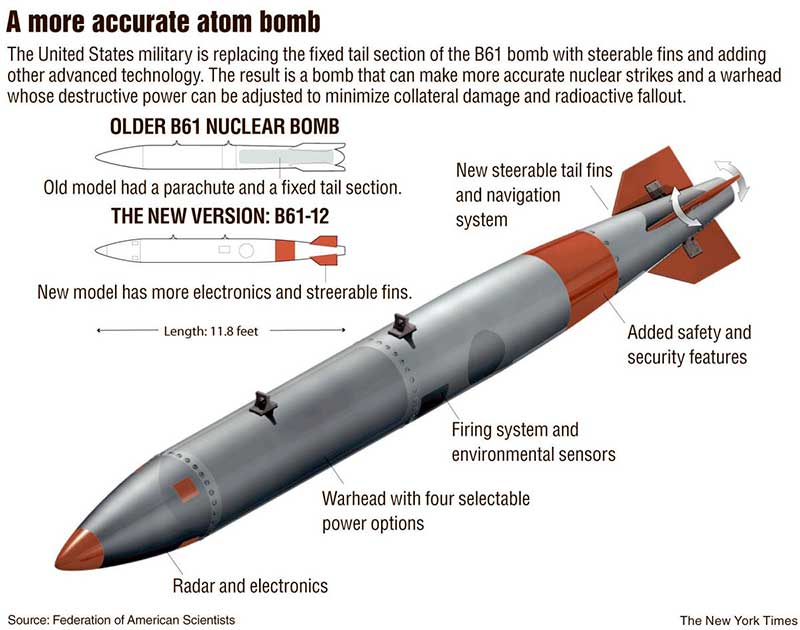