The visit to Taiwan of US House Speaker Nancy Pelosi has produced an extensive reaction by the Communist Party of China (CPC/CCP/PRC). Announced “countermeasures” in the Global Times include cancellations, suspensions, strong signals, a public pivot toward confrontation and escalation 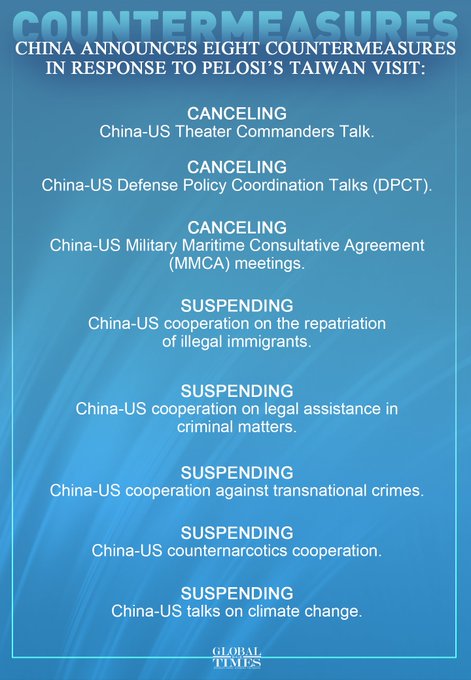 The strategic importance of Taiwan’s semiconductor fabrication and manufacturing is a key to understanding the demands of a democratic Taiwan, as it is the largest producer of essential semiconductors and computer chips in the world.

At the vital necessity of chips is recognized, mainland China’s Belt and Road Initiative (BRI), Eurasia strategy, and global climate action all now come into play… an international shift, a 21st century repositioning of nations, capabilities and supply chains is gathering speed, increasing risk and adding deep costs as war preparations and a new nuclear race heat up…

The consequences of a rising Great Power Game are now coming into wider view.

The White House summoned China’s ambassador on Thursday to condemn China’s “irresponsible” military activities near Taiwan as tensions continue to escalate in the region following US House Speaker Nancy Pelosi’s visit to the island this week. The decision to summon Qin came after days of warnings to China not to escalate tensions in the region following the speaker’s visit to the self-governing island, which the Chinese Communist Party regards as its territory despite having never controlled it. It represents a shift from the White House’s attitude about the trip before it occurred, when officials privately tried to warn Pelosi over the possible consequences of the visit and how it could harm US-China relations. The meeting was first reported by The Washington Post.

Secretary of State Antony Blinken, speaking to reporters in Cambodia, delivered an equally sharp message to China. “There is no justification for this extreme, disproportionate, and escalatory military response,” he said, adding, “These provocative actions are a significant escalation…They’ve taken dangerous acts to a new level.”