A moment last fall in the Moscow press talked of turning the U.S. into a ash wasteland, the result of Russian nuclear weapons. This carryover from the first Cold War (call it 1.0) has bestowed another level of Mutually Assured Destruction to today’s new Nuclear MAD, a Cold War 2.0 getting hotter day by day…

Ukrainian President Volodymyr Zelenskyy marked the 36th anniversary of the Chernobyl nuclear disaster with a speech condemning Russia’s “completely irresponsible actions” around nuclear power plants during its invasion and calling for “global control” of the Kremlin’s nuclear capabilities.

“Every year on April 26th, the world remembers the Chernobyl disaster, the worst nuclear disaster in human history,” Zelenskyy began. “But this year it is not enough just to remember Chernobyl… because this year, Russia created new threats that could surpass even the worst accident…”

“It is even surprising how quickly and completely Russia, the whole country, can forget about the worst catastrophe that its people have experienced as well,” the president added, noting that Russians suffered in the wake of the Chernobyl disaster on April 26, 1986. Rather than commemorating the anniversary of the disaster – which killed less than 100 people directly but increased mortality over the following decades in the surrounding area – Russia has escalated the situation, Zelenskyy charged.

“Instead, today they launched three missiles against Ukraine so that they flew directly over the blocks of our nuclear power plants – over three nuclear power plants at once, over Zaporizhzhia, Khmelnytskyi, and South-Ukrainian NPPs,” the president said. “What is it? Are they threatening? There are no words.”

Zelenskyy noted that International Atomic Energy Agency Director General Rafael Mariano Grossi met with him in Kyiv to commemorate the Chernobyl disaster and pledge his support.

“We discussed all the dangers created by Russia and ways to possibly influence the situation to protect Europe and the world from completely irresponsible actions of the Russian Federation,” the president said.

He then called for a global takeover of Russia’s nuclear capabilities.

“I believe that after all that the Russian military has done in the Chernobyl zone and at the Zaporizhzhia power plant, no one in the world can feel safe knowing how many nuclear facilities, nuclear weapons and related technologies the Russian state has,” Zelenskyy said. “If Russia has forgotten what Chernobyl is, it means that global control over Russia’s nuclear facilities, and nuclear technology is needed.”

Chernobyl conditions were ‘very dangerous’ after Russia seized it, the head of the world nuclear agency says.

Russia’s seizure of the Chernobyl nuclear power plant was “absolutely abnormal and very, very dangerous,” Rafael Grossi, director general of the International Atomic Energy Agency (IAEA), said Tuesday during his visit to the plant, according to the New York Times.

Why it matters: The power plant, which is inoperative but still manages the fallout of the 1986 nuclear disaster and stores and processes nuclear waste, fell under Russian control in the first day of its invasion of Ukraine.

After Russia occupied the plant, it lost direct power and had to rely on emergency diesel generators for several days after power lines were damaged. IAEA also lost access to data from systems it uses to monitor conditions at the plant.

Russian troops held plant’s staff members hostage and forced them to operate the plant for around 600 hours before they were allowed to leave. 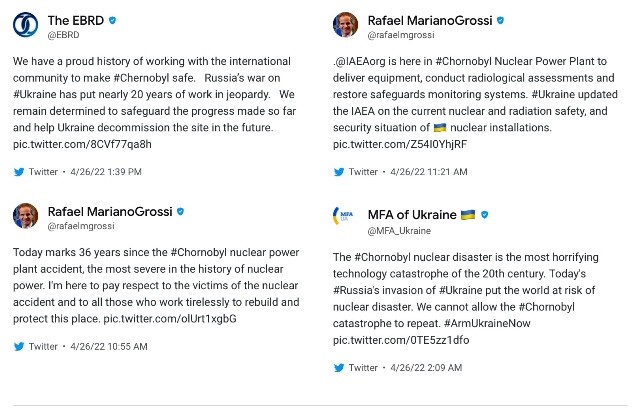 Today (Dec 21, 2021) Dmitry Kiselyov, a media mogul known as Putin’s mouthpiece, warned US-led aggression could lead to a nuclear war.
He told NATO to back off, adding: “Otherwise, everyone will be turned into radioactive ash”.

A Russian state television host threatened on Sunday that the U.S. could be “reduced to radioactive ash” if it does not meet the demands laid out by Russia for deescalating tensions around Ukraine.

Russia demanded that the North Atlantic Treaty Organization (NATO) should roll back military deployments in eastern Europe and bar Ukraine and other post-Soviet nations from joining the alliance. News of the Week state-TV host Dmitry Kiselyov went on a lengthy monologue about why the U.S. and NATO should meet Russia’s demands.

“The U.S. and NATO must roll back from our borders, otherwise we will, figuratively speaking, ‘roll up’ to their borders and create symmetrical, unacceptable risks… If you put a gun to our head, we will respond in kind,” Kiselyov said.

Kiselyov went on to say, “Never before has anyone published the texts of the proposed treaties, but never before in the 21st century has the situation been so acute, and the risks so great.”

“We’re holding very strong cards in our hands,” the Russian TV host continued. “Our hypersonic weapons are guaranteed to produce a response that is so unpleasant for America to hear: being reduced to radioactive ash.”

Russia can turn US to radioactive ash – Kremlin-backed journalist

MOSCOW, March 16 (Reuters) – A Kremlin-backed journalist issued a stark warning to the United States about Moscow’s nuclear capabilities on Sunday as the White House threatened sanctions over Crimea’s referendum on union with Russia.

“Russia is the only country in the world that is realistically capable of turning the United States into radioactive ash,” television presenter Dmitry Kiselyov said on his weekly current affairs show.

Behind him was a backdrop of a mushroom cloud following a nuclear blast. 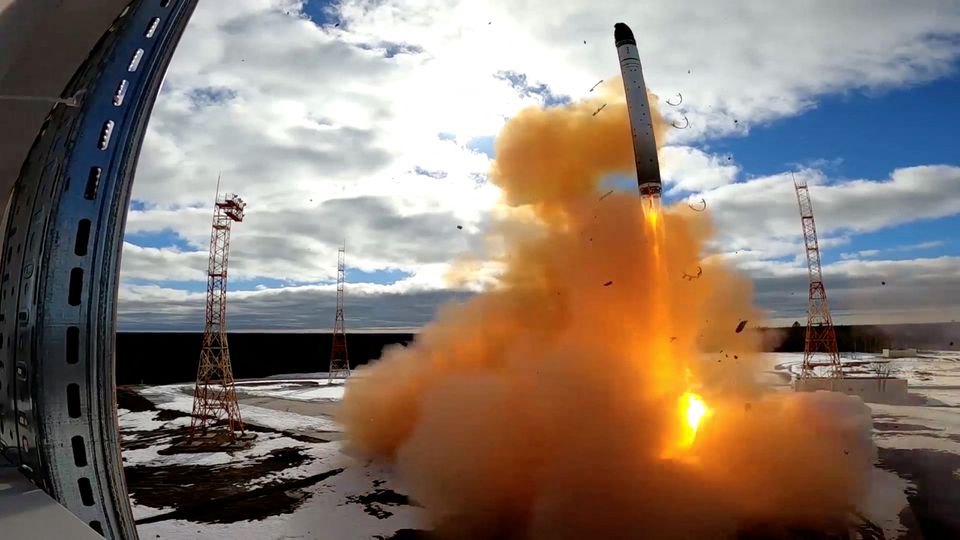 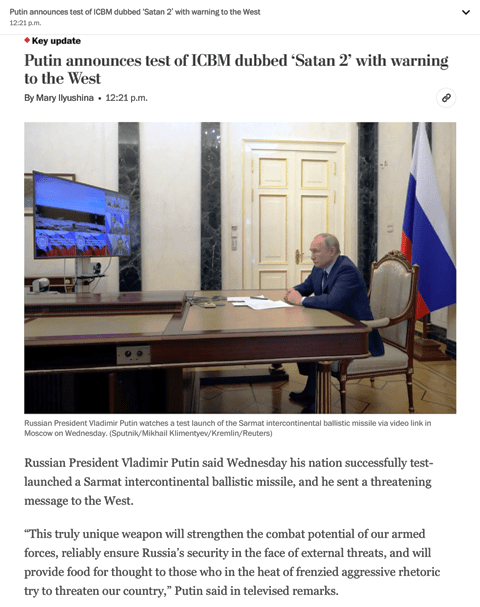 Russia said on Saturday it plans to deploy its newly tested Sarmat intercontinental ballistic missiles, capable of mounting nuclear strikes against the United States, by autumn.

The target stated by Dmitry Rogozin, head of the Roscosmos space agency, is an ambitious one as Russia reported its first test-launch only on Wednesday and Western military experts say more will be needed before the missile can be deployed. read more

The Sarmat is capable of carrying 10 or more nuclear warheads and decoys, and of striking targets thousands of miles away in the United States or Europe.

This week’s test, after years of delays due to funding and technical issues, marks a show of strength by Russia at a time when the war in Ukraine has sent tensions with the United States and its allies soaring to their highest levels since the 1962 Cuban missile crisis.

Rogozin said in an interview with Russian state TV that the missiles would be deployed with a unit in the Krasnoyarsk region of Siberia, about 3,000 km (1,860 miles) east of Moscow.

He said they would be placed at the same sites and in the same silos as the Soviet-era Voyevoda missiles they are replacing, something that would save “colossal resources and time”.

The launch of the “super-weapon” was an historic event that would guarantee the security of Russia’s children and grandchildren for the next 30-40 years, Rogozin added... 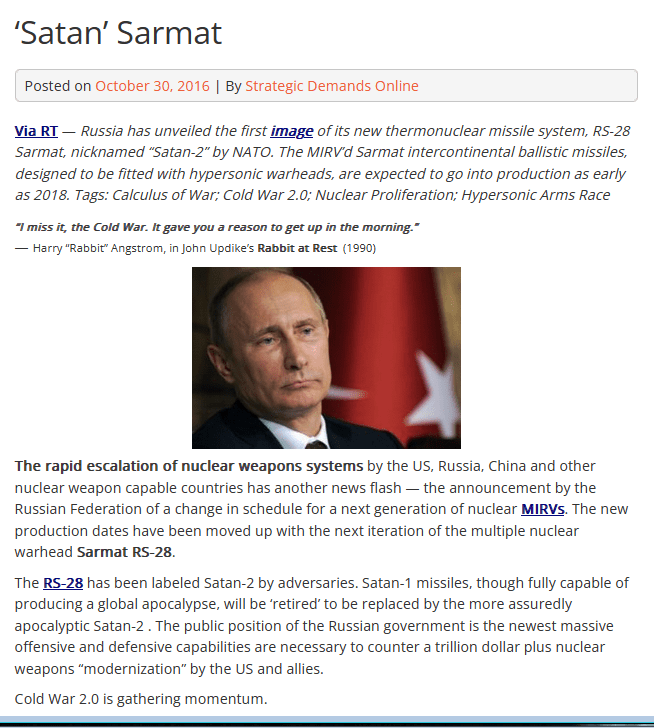