Afghanistan, the US announces its withdrawal

Fifteen years ago, we said the US Afghanistan war was a profound disaster, a choice to invade that would end in failure as so many invasions in the past have ended. Today, some twenty years from the war’s inception, the US president declared the withdrawal of US troops

Fifteen years ago, in a National Security Brief prepared by founders of Strategic Demands, we spoke of ‘Surviving Victory’.

Within a larger set of national security policy needs, we wrote of Mid- and Near-East ‘wars of choice’ as US troops deployed across the region and in Afghanistan, where Pentagon and CIA forces battled an enemy that had defeated every invading force over centuries. We wrote of US politics, policies of Democratic and Republican parties that were bound for failure.

Roger Morris and Steve Schmidt wrote of… “an untenable regime seen as our puppet, a still potent Taliban resistance, the ever-hovering Pakistanis furtively supporting all sides with the aim of the permanent weakness if not full subservience of Afghanistan, and Afghan drug lord-warlords who hold the balance of power in that tragic narco-colony.”

“To move beyond failure, a new policy would stop all collusion and temporizing with the local mafias and drug trade, replace US forces with peacekeeping from countries genuinely neutral in the area’s tortuous politics, muster international support to end Pakistani interference, renounce all interest in corporate exploitation of Afghan resources or territory for oil transit, and fulfill the unmet promise of decisive international aid to enable an independent, non-sectarian Afghan regime to survive, and eventually to break the hold of the opium warlords.”

Today, April 14, 2021, a US president spoke few words about the ongoing tragedy in Afghanistan, the costs of war, inter-generational losses, the history, the intersection of Afghanistan at the center of a continent, its place in a ‘great game’ of continental rivals, its colonial past, its drug warlords, a web of connections and costs that will carry forward.

Today, with sadness and wariness, we listened as US president Biden, with resignation and acknowledgement, announced an end, an end to the US-Afghanistan war that will be completed by September 11th: 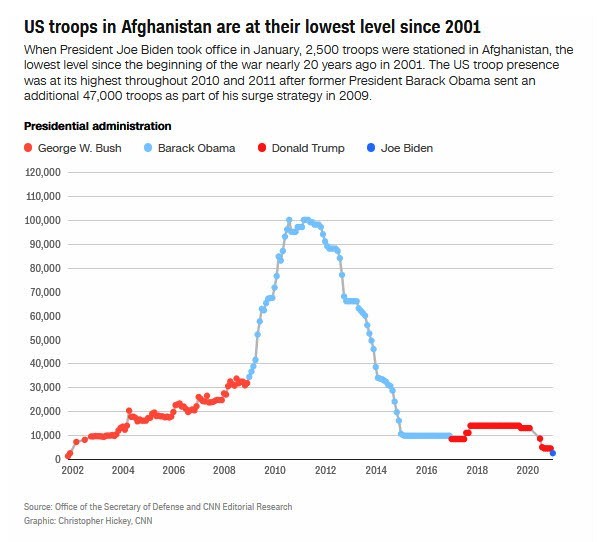 “War in Afghanistan was never meant to be a multigenerational undertaking,” Biden said during his remarks from the White House Treaty Room, the same location from which President George W. Bush had announced the war was beginning in October 2001.

“We were attacked. We went to war with clear goals. We achieved those objectives,” Biden went on. “Bin Laden is dead and al Qaeda is degraded in Afghanistan and it’s time to end the forever war.”

It was a decisive moment for a President not yet 100 days into the job. Biden has spent months weighing his decision, and he determined a war in Afghanistan that has killed some 2,300 US troops and cost more than $2 trillion no longer fit within the pressing foreign policy concerns of 2021.

The deadline Biden has set is absolute, with no potential for extension based on worsening conditions on the ground. Officials said that after two decades of war, it was clear to the President that throwing more time and money at Afghanistan’s problems wasn’t going to work, even as senior military and national security advisers cautioned against a full withdrawal.

“We cannot continue the cycle of extending or expanding our military presence in Afghanistan hoping to create the ideal conditions for our withdrawal, expecting a different result,” Biden said.

“I am now the fourth American president to preside over an American troop presence in Afghanistan. Two Republicans. Two Democrats,” he went on. “I will not pass this responsibility to a fifth.”

Biden said the withdrawal will begin on May 1, in line with an agreement President Donald Trump’s administration made with the Taliban. Some US troops will remain to protect American diplomats, though officials have declined to provide a precise number.

Biden said American diplomatic and humanitarian efforts would continue in Afghanistan and that the US would support peace efforts between the Afghan government and the Taliban. But he was unequivocal that two decades after it began, the Afghanistan War is ending.

“It is time to end America’s longest war. It is time for American troops to come home.”