Space Force. The words by themselves call out science fiction that is reality. Star Wars of the vivid imagination when George Lucas leaves the on-screen world for the real world — and the U.S. Air Force, at first reluctantly but then obediently, salutes with Yes Sir — and the U.S. president smiles. A new brand … created as ordered by Donald Trump, Commander-in-Chief of the U.S. military

With a wave of his pen, President Donald Trump signed onto the new Space Force.

“This is a very big and important moment,” Trump said during a Friday ceremony at Joint Base Andrews where he signed off on the fiscal 2020 defense authorization bill, which establishes the Space Force as a sixth military service under the Department of the Air Force.

“Space — there’s going to be a lot of things happening in space, because space is the world’s newest warfighting domain,” he said. “America’s superiority in space is absolutely vital and we’re leading, but we’re not leading by enough, but very shortly we’ll be leading by a lot.”

Your Strategic Demands editor recently found himself recalling a memory as I read about the former Secretary of the Air Force and her initial reaction to the U.S. Commander in Chief talking of war in space and his desire to carve out from the U.S. Air Force a new Space Force…

>I used to debate the Sec of the US Air Force, Heather Wilson, when she was a Congressional Rep in NM and I was on the State Bd of Education. The word these days is she was less than enthusiastic (putting it mildly and acknowledging her training on chain of command) that the Air Force’s existing space command, and international treaties on space, will be in question. The commander in chief does want a space command creator legacy…

The force is here, so let’s talk about the new Space Force.

Let’s start with how it was announced to the general public.

A logo contest. We mentioned, and posted, a few of the Space Force logos.

Space Force logos and the Space Force itself soon slipped from front of mind amid Congressional hearing about the president’s actions with Ukraine, Russia, NATO and an impeachment proceeding that turned into an impeachment itself.

But the Space Force kept on amid the daily onslaught of social media and news, and political charges and counter-charges.

We had almost completely forgotten …. but the Space Force is approved now as a part of the national defense budget.

The former head of the Air Force, Heather Wilson, has moved on to the presidency of a Texas college and we now hear how the initial (meager) Space Force planning money will be spent:

“There has been a planning team that has been building the phased construction of this force and the development of the force so that we have a plan at the 30, 60 and 90 … and the 120 day [mark],” she said.

Raymond characterized the signing of the defense bill as “day one” for the Space Force.

“There are thousands and thousands of actions that are going to have to take place. Everything from what does a uniform look like, to a logo, to who is in the Space Force and who is not in the Space Force, and that work has been planned and will continue to be refined.

It’s going to be really important that we get this right. A uniform. A patch. A song. It gets to the culture of a service,” Raymond said. “So we’re not going to be in a rush to get something, and not do that right. There’s a lot of work going on towards that end. I don’t think it’s going to take a long time to get that done, but that’s not something we’re going to roll out on day one.”

Let’s go to the Wiki world for a bit more about the force, the U.S. force, not the Stars Wars force — https://en.wikipedia.org/wiki/United_States_Space_Force

Let’s take a closer look at the legislative funding —

House passes massive defense bill, authorizing a Space Force as the sixth Armed Service of the US

“It was essential that this year’s NDAA fully authorize the creation of a Space Force as the sixth branch of the armed forces,” Esper told the annual Reagan National Defense Forum. “And I want to personally thank Congress for doing that.”

Maj. Gen. Clinton E. Crosier, who is in charge of the Air Force planning process for the Space Force, told Breaking D yesterday during the West Coast Aerospace Forum in Santa Monica that while they haven’t been able to talk much about it, the service already has put together detailed alternate plans — based on possible outcomes from the NDAA — for how to stand up the Space Force “from day one.”

“Our primary planing directive has been: execute all necessary planning to preserve the opportunity to rapidly stand up if authorized. So we are doing a wide scope of planning trying to get more and more narrow as we get more clarity,” he said. “But we’re going to be ready to respond to whatever the language says.”

Barrett said the Space Force will need to focus on both how to protect current national security space assets and ensure that the overall architecture fulfills the future needs of the warfighters on the ground.

The Democratic-controlled chamber voted by 377-48, easily sending the conference report on the National Defense Authorization Act, or NDAA, to the Republican-controlled Senate, which is expected to pass it by the end of next week.

Trump said he would sign the bill as soon as it passes.

“Wow!” he said on Twitter. “All of our priorities have made it into the final NDAA: Pay Raise for our Troops, Rebuilding our Military, Paid Parental Leave, Border Security, and Space Force! Congress – don’t delay this anymore! I will sign this historic defense legislation immediately!”

Now come the consequences, beginning with the Outer Space Treaty, which can now be added to the collapsing arms control architecture of the past three years.

The end of arms control in space, an essential component to preventing an arms race in space, is about to go away.

There is, in our strategic opinion, that the Russian and Chinese will stand down now.

What can be predicted is another front is the arms race. 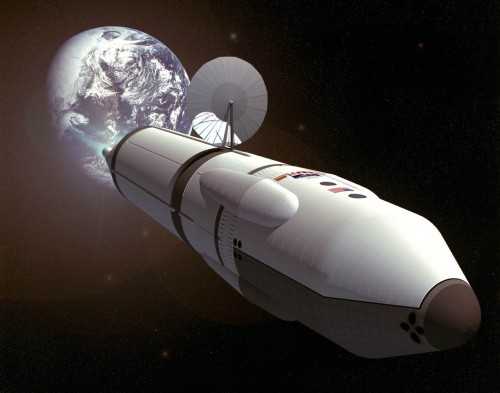