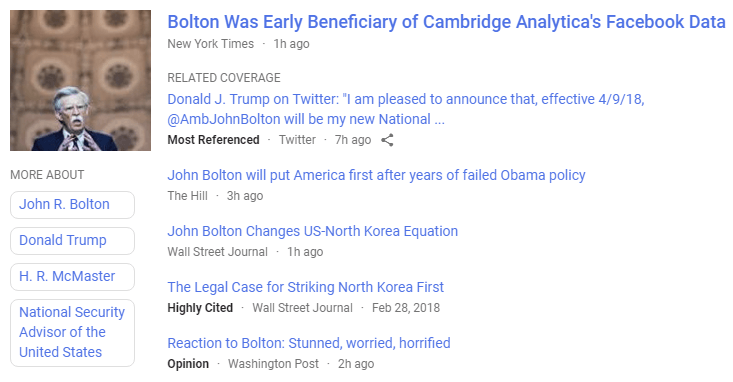 Does the necessity of self-defense leave ‘no choice of means, and no moment of deliberation’?

At times like this it is appropriate to consider that the Wall Street Journal is part of Murdoch / Fox News Corp and that the U.S. president faithfully watches and quotes Fox, especially Fox & Friends, live tweeting as he reaches out to his base and beyond.

The appointment of John Bolton, former Fox on-air analyst/commentator, is bringing Fox closer to the president. In fact, Fox is in the White House.

Here is Seb Gorka at 7:59 AM EDT explaining the Bolton appointment via The Hill.

Already one can hear the voices of those who think Bolton’s public statements on Iraq and, more recently, North Korea will bring him into instant conflict with his new boss. Not so. For as the ambassador made clear in a rather lengthy Fox News interview given just minutes after the president posted his tweet announcing the personnel change, the ambassador has fully internalized that which McMaster never did.

Quoting legendary Secretary of State Dean Acheson’s response to the question of why he and President Truman had such a good relationship, Acheson replied that the answer was easy: “Neither the president or I ever forgot who is president.”

The fact that this was the quote the NSA-designee highlighted, in his very first interview after the announcement, speaks greatly to just how much Bolton “gets” what his new job is.

Here is Kellyanne Conway, explaining the appointment, during today’s 8 AM Fox & Friends segment.

One can assume the president watches in the White House as it airs, or with his digital recording playback system. 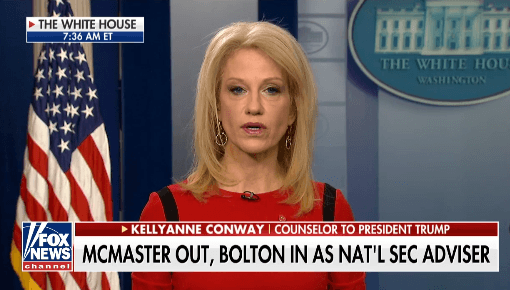