Today we wake to the US President touting his own IQ, having been called a “moron” by the US Secretary of State, and complaining via Tweets that US Senator Bob Corker (R-TN) gave a recorded interview to the NY Times, as the Senator and his staff previously acknowledged, questioning the President’s mental fitness

Update: The New York Times today goes on the record calling for a change in nuclear weapons command authority.

Strategic Demands’ proposed draft legislation, “An Act to Ensure the Safe Use of the Nuclear Option”, dated August 26, 2017, continues to circulate to prompt expeditious action.

Mr. Trump Alone Can Order a Nuclear Strike. Congress Can Change That.

Mr. Trump’s policy pronouncements during the campaign betrayed either profound ignorance or dangerous nonchalance: At one point he wondered why America had nuclear weapons if it didn’t use them; at another he suggested that Japan and South Korea, which have long lived under the American security umbrella, should develop their own nuclear weapons. But nothing he said has been quite as unsettling as his recent tweetstorms about North Korea, his warnings of “fire and fury” and his quip about “the calm before the storm.”

Many have hoped, and still hope, that Mr. Trump’s aggressive posture is mostly theater, designed to slake his thirst for attention, keep adversaries off guard and force changes in their behavior by words alone. But there is no underlying strategy to his loose talk, and whatever he means by it, Congress has been sufficiently alarmed to consider legislation that would bar the president from launching a first nuclear strike without a declaration of war by Congress. It wouldn’t take away the president’s ability to defend the country.

That’s a sound idea, and could be made stronger with a requirement that the secretaries of defense and state also approve any such decision. 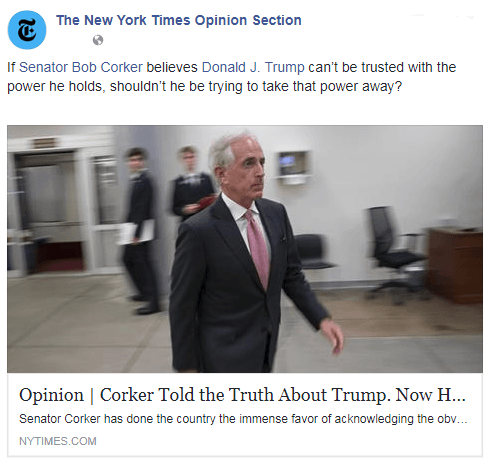 Once again the question of the capabilities of the Commander-in-Chief come into question. Many are writing and asking about the President’s fitness, judgment and profound crises, including nuclear crisis, that can come about with grave and lasting consequences as a result.

Over the past few months, the country has been in a foul sort of trance. Among people who work in politics, Republicans as well as Democrats, it is conventional wisdom that President Trump is staggeringly ill-informed, erratic, reckless and dishonest. (He also might be compromised by a hostile foreign power.) But it’s also conventional wisdom that with few exceptions, Republicans in Congress are not going to stand up to him.

Trump, Corker told the reporters Jonathan Martin and Mark Landler, is treating the presidency like “a reality show” and could be setting the nation “on the path to World War III.” Corker has previously said that Secretary of State Rex Tillerson, Secretary of Defense James Mattis and Chief of Staff John Kelly “help separate our country from chaos.” On Sunday, he identified the agent of that chaos. “I know for a fact that every single day at the White House, it’s a situation of trying to contain him,” Corker said of Trump.

Strategic Demands has a bold suggestion for action, one we put forward weeks ago, one to prevent cataclysmic nuclear war.

Here is the first draft proposal

Legislation relating to the 25th amendment

(2) (i) Eminent persons of expertise in the fields of medicine, psychology, the legal profession including constitutional law scholars, political science, military strategy, journalism, and other areas of expertise relevant to determining the capacity of the President to discharge the powers and duties of the presidency. This body shall consist of forty persons, of whom no more than four shall be politicians who have held elected office. Any vacancies shall be filled in the same manner.

(d) A quorum for the Body shall be 24 members. Actual notice shall be required to all members for a non-scheduled meeting of the Body. If the body be equally divided on any matter, the Speaker of the House shall decide.