As the U.S. President continues to tweet that he has “WON THE ELECTION!” and refuses to concede his defeat, questions are being asked about the president’s singular authority to order unilateral military action between now and Inauguration day. One decision looms large, war against Iran …

(After Strategic Demands’ publication on November 25th, warning of a “December Surprise” in the Mid East, a November 27th assassination in Iran brings talk of the fate of the Iran-International nuclear deal and serious threats of a another war…)

The killing of Iran’s top nuclear scientist is likely to impede the country’s military ambitions. Its real purpose may have been to prevent the president-elect from resuming diplomacy with Tehran.

Was scientist’s killing the opening shot of a Trump-led war on Iran? 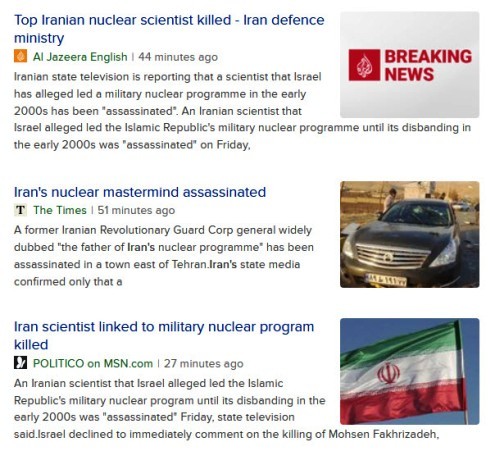 Biden transition spokeswoman Jen Psaki told reporters the news during a call Wednesday after a spokesperson for the Office of Director of National Intelligence (ODNI) announced Tuesday that the White House had granted the ODNI permission to give Biden the presidential daily briefing as apart of the transition process.

The document is a written summary of high-level intelligence that the president receives on a daily basis.

While President Trump has yet to concede and continues to challenge the results of this month’s election in court, his approval was necessary in order for Biden to receive the daily report.

It is unclear whether Biden and Trump will meet during the process, which is typical for presidential transition processes.

(StratDem: The all-source information and analysis on national security issues contained in the President’s Daily Brief (PDF) should address all current threats, U.S. response status, and pending actions. Any planned military actions should, one would venture, come into view through this top-secret intelligence briefing. In public statements, president-elect Biden has said (as of today Nov. 25) that he has yet to talk with president Trump since the Nov. 3 election.)

WASHINGTON — President Trump asked senior advisers in an Oval Office meeting on Thursday whether he had options to take action against Iran’s main nuclear site in the coming weeks. The meeting occurred a day after international inspectors reported a significant increase in the country’s stockpile of nuclear material, four current and former U.S. officials said on Monday.

A range of senior advisers dissuaded the president from moving ahead with a military strike. The advisers — including Vice President Mike Pence; Secretary of State Mike Pompeo; Christopher C. Miller, the acting defense secretary; and Gen. Mark A. Milley, the chairman of the Joint Chiefs of Staff — warned that a strike against Iran’s facilities could easily escalate into a broader conflict in the last weeks of Mr. Trump’s presidency.

Since Mr. Trump dismissed Defense Secretary Mark T. Esper and other top Pentagon aides last week, Defense Department and other national security officials have privately expressed worries that the president might initiate operations, whether overt or secret, against Iran or other adversaries at the end of his term.

White House officials did not respond to requests for comment.

The meeting comes a day after Washington imposed yet another round of sanctions on Iranian and Iran-related groups and individuals, including Minister of Intelligence Mahmoud Alavi and a charitable network linked to Supreme Leader Ayatollah Ali Khamenei.

The US reimposed sanctions on the Islamic Republic after President Donald Trump unilaterally withdrew the US from the Iran nuclear deal in 2018.

In a Wednesday statement titled “The Importance of Sanctions on Iran,” Pompeo described Washington’s “maximum pressure campaign” against Tehran as “extremely effective.”

“Sanctions are part of the pressures creating a new Middle East, bringing together countries that suffer the consequences of Iran’s violence and seek a region more peaceful and stable than before,” Pompeo wrote.

“Throughout the coming weeks and months, we will impose new sanctions on Iran, including using our nuclear, counterterrorism, and human rights authorities, each reflecting the wide range of malign behavior that continues to emanate from the Iranian regime,” he said.

After his meeting with the US Secretary of Sate, Prime Minister Netanyahu reserved particular praise for the Trump administration’s aggressive stance on Iran.

“Thanks to your tremendous efforts to carry out President Trump’s maximum pressure campaign, Iran’s feet have been held to the fire and we have seen a reduction in the amount of support that they are giving to their various proxies in the region,” he said. He mentioned a speech Pompeo made in May 2018 in which he listed 12 demands Iran has to fulfill if it wants the US to lift sanctions, hinting that it should serve as guiding principle for any future engagement with the Islamic Republic.

“Your twelve points set the standard for what Iran needs to do if it wants to be treated like a normal country,” Netanyahu said. “Those who claim that your twelve points are either unnecessary or unrealistic simply want to give Iran a free pass… The tyrants of Tehran deserve no free passes.”

Neither Netanyahu nor Pompeo said anything about the U.S. election. Pompeo, like Trump, has yet to acknowledge Biden’s victory. Netanyahu earlier this week congratulated Biden and referred to him as the president-elect in an official statement.

Saudi Foreign Minister Prince Faisal bin Farhan denied that the crown prince met with Israeli officials during the meeting with Pompeo, saying, “the only officials present were American and Saudi.” However, he did not deny that any meeting between MBS and Netanyahu took place.

President Hassan Rouhani said Tehran could ease tensions with the new US administration, only one day after Iran’s supreme leader expressed disappointment at negotiations.

Prior to the US elections, Rouhani and his administration adhered to the official line that Iran recognizes no difference between a Trump reelection or a victory by Democrat Joe Biden. However, Rouhani declared that he believes “a solution to the problem is easy” if the Biden administration shares the “resolve to de-escalate tensions and respect international obligations.”

Rouhani was referring to the 2015 nuclear deal Trump withdrew from but that President-elect Biden is expected to reinstate. “Both Iran and the United States can decide to return to where they were prior to Jan. 20, 2017” (the Trump presidency’s first day) when Iran and the other signatories were carrying out the multilateral accord. “The next stages could come afterward…”