“Environmental Security” integral to “National Security”: This week we highlight the Synthesis Report of the UN Intergovernmental Panel on Climate Change and the recently published “This Changes Everything”, described by the NY Times as “the most momentous and contentious environmental book since ‘Silent Spring.'”

At the top of this week is the fifth ‘final’ assessment report of the United Nations International scientific group, the IPCC.

The Report released on November 2nd is described as “paving the way for a global, legally binding treaty on reducing carbon emissions at the UN Climate Change Conference in Paris during late 2015.”

Amid controversy from political entities and outliers who have questioned the science and scientific recommendations, a ‘clear and present danger’ is emphasized in bold terms by an overwhelming consensus in the November report which brings together years of study —

More than 830 coordinating lead authors, lead authors and review editors from over 80 countries and covering a range of scientific, technical and socio-economic views and expertise, produced the three working group contributions, supported by over 1000 contributing authors and drawing on the insights of over 2,000 expert reviewers in a process of repeated review and revision.

The authors assessed more than 30,000 scientific papers to develop the Fifth Assessment Report. About 60 authors and editors drawn from the IPCC Bureau and from Working Group author teams have been involved in the writing of the Synthesis Report. Their work was made possible by the contributions and dedication of the Synthesis Report Technical Support Unit.

Concurrent to the release of the warnings in the UN study, this week’s US midterm election results included the re-election of Senator James Inhofe from Oklahoma, who considers climate change science “the greatest hoax” and is widely considered the most strident anti-environmental, anti-renewable energy voice in the U.S. Congress. “The Greatest Hoax“, written by Senator Inhofe, lays out his beliefs about a “green scheme”. The Senator has been vocal, in addition, repeating his frequent claim that human influenced climate change is impossible because “God’s still up there.” Inhofe cites Genesis 8:22 to claim that it is “outrageous” and arrogant for people to believe human beings are “able to change what He is doing in the climate.”

The Senator’s seniority puts him in a position to chair the Senate environmental oversight committee.

The ramifications of the change in US climate and EPA policy are far-reaching. Consequences range from national US priorities to global impacts. A political struggle over national security priorities and the direction of the U.S. environmental policy in a Republican-controlled Inhofe-era re-engaged on November 4th.

Senator Inhofe’s positions could be accompanied by those of Senator Cruz/R-TX, as chair of the Subcommittee on Science and Space.

Moving on, this week’s NY Times review of “This Changes Everything“, comparing the sweeping work to the classic “Silent Spring“, extends the ‘this changes everything’ meme far beyond the book’s scope.

We begin with Naomi Klein talking of her latest work. 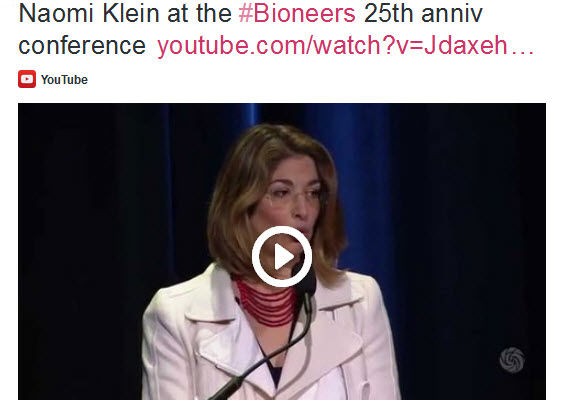 Q&A with Klein at Slate

Next up are excerpts from and links to reviews of the book — and its 600+ pages:

By Rob Nixon in the NY Times

To call “This Changes Everything” environmental is to limit Klein’s considerable agenda. “There is still time to avoid catastrophic warming,” she contends, “but not within the rules of capitalism as they are currently constructed. Which is surely the best argument there has ever been for changing those rules.”

By Steve Hill in The National Memo

“This Changes Everything: Capitalism vs. The Climate” is well-meaning but deeply flawed, and ignores potential reforms and solutions… Klein actually praises Germany, Sweden, and Denmark for their leadership in carbon reduction, yet these are capitalist countries which, as I point out in my book Europe’s Promise, practice a “social capitalism” that is quite different from the U.S. version. They have done far more to figure out how to harness the powerful economic engine of capitalism to create a broad prosperity while reducing the negative effects on the environment. These nations have challenges, but if the goal is carbon reduction, environmental protection, and reducing economic inequality, they are beacons. This failure to discriminate among capitalisms is a mistake Klein also made in her book The Shock Doctrine. Other problems in the book also undermine its usefulness, such as Klein’s failure to connect the dots to the need for political reform (especially in the US and her native Canada) except in the most superficial way… (A)t the end of the day, our troubling climate future really does ‘change everything.’ Which makes it even more of a pity that Klein’s book isn’t more focused and useful in this fight.

By John Gray in the Guardian (UK)

Much of this book is concerned with showing that powerful and well-financed rightwing thinktanks and lobby groups lie behind the denial of climate change in recent years. There is not much reasonable doubt as to the findings of science on the subject. As a result of human activities, large-scale climate change is under way, and if it goes on unchecked it will fundamentally alter the world in which humans will in future have to live. Yet the political response has been at best ambiguous and indecisive…  Throughout This Changes Everything, Klein describes the climate crisis as a confrontation between capitalism and the planet. It would be more accurate to describe the crisis as a clash between the expanding demands of humankind and a finite world, but however the conflict is framed there can be no doubt who the winner will be. The Earth is vastly older and stronger than the human animal. Even spraying sulphuric acid into the stratosphere will not trouble the planet for long. The change that is under way is no more than the Earth returning to equilibrium – a process that will go on for centuries or millennia whatever anyone does. Rather than denying this irreversible shift, we’d be better off trying to find ways of living with it.

By Stanley Johnson in the Telegraph (UK)

Klein may be politically on the Left of the spectrum but she is no advocate of socialism. She points out that Eastern Bloc carbon emissions in Soviet times were some of the highest in the world. But she does insist that governments, too, have “skin in the game”, having spent billions of dollars in recent years rescuing the private sector from the consequences of its own greed and stupidity.

We emerged from the last, financial, disaster by the skin of our teeth. Why should we allow unbridled, unregulated capitalism to lead us to a new planetary-scale breakdown? If this means that Congress should at last mandate the US Environment Protection Agency (EPA) to set carbon limits industry by industry and even plant by plant, so be it.

Most important, Klein believes in local activism, in financial “disinvestment” in the earth-destroying corporations, and in respect for the rights of indigenous people whose land all over the world is being raped and pillaged. The production systems she advocates would, she argues, help “solve” global warming and so much else besides. For example, she writes: “Vandana Shiva, the Indian author and activist, points out that shifting to an agriculture based on agro-ecological models would not only sequester large amounts of carbon, it would reduce emissions and increase food security.” Are businesses like Monsanto, Cargill, BP, and Mobil, and the big banks like RBS and HSBC who finance the activities of the corporate world, actually listening to people like Vandana Shiva and Naomi Klein? Probably not, though some of them have learned by now to talk a good game. But while there’s life, there’s hope. “This Changes Everything”

Reviewed by Reason (arguing that ‘This Changes Nothing’)