This week StratDem visits Jeffrey Lewis as he and NTI offer an interactive snapshot of Mideast missile threats. Against a backdrop of escalating tensions, the US president’s son-in-law Jared Kushner is reported to be ready to reveal a long-promised ‘peace plan’. US abandonment of the JCPOA with Iran is a reality check

Given the amount of press attention, one might be forgiven for focusing on Iran’s missiles to the exclusion of all others. And yet, Iran’s missile program does not exist in a vacuum. It is part of a decades-long process during which many regional states have acquired similar capabilities. Israel and Egypt were the first countries in the region to pursue long-range ballistic missiles, while Iran’s program did not begin until Iraq launched missiles at Tehran and other urban centers during the so-called War of the Cities in the 1980s.

Iran’s growing missile capabilities should be understood in the context of widespread missile proliferation throughout the Middle East. Iran is one of eleven different countries in the region that possess long-range missiles—missiles that either approach or exceed the threshold defined by the Missile Technology Control Regime (MTCR) for Category I missiles.  As illustrated in the below interactive map of missile programs in the region, countries with long-range missiles include: Bahrain, Egypt, Iran, Israel, Qatar, Saudi Arabia, Syria, Turkey, the United Arab Emirates, and Yemen.  While many of these missile systems have been imported, six of the eleven countries on this list either possess or are developing a domestic manufacturing capability.

News on the Mideast Peace Plan

In a rare interview Jared Kushner stopped short of supporting Palestinian statehood. Asked by Axios if Palestinians could expect freedom from Israeli interference — either governmental or military — Kushner responded, “I think that’s a high bar … if you don’t have proper government structure and proper security when people are living in fear of terror, that hurts the Palestinians.”

“The hope is that over time they can become capable of governing,” added Kushner. The Palestinians “need to have a fair judicial system … freedom of press, freedom of expression, tolerance for all religions” before the Palestinian territories can become “investable.” 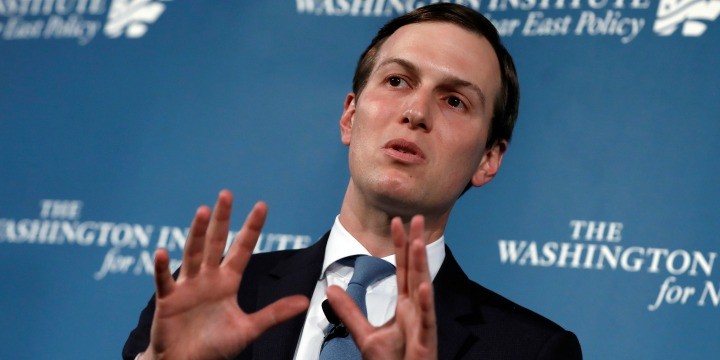 Trump administration is reported as rushing approvals for nuclear sharing