An auspicious Monday arriving with news that the long running Iran nuclear talks have not produced an agreement — and that the negotiations have been extended until June 2015 — accompanied by surprising news that the U.S. Secretary of Defense is resigning… 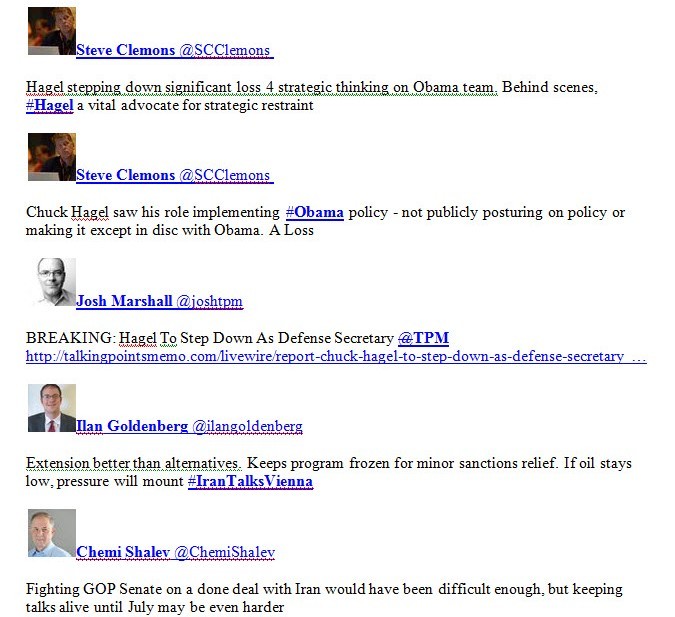 Multiple media channels light up beginning with a first announcement, by the NY Times, on the Hagel resignation

Inside the Hagel Meltdown / Daily Beast

Why was there no discussion or hint of issues when Hagel was interviewed on the Charlie Rose Show, 11/18/2014

Is it coincidence the same day that the end of Iran talks is announced, the resignation is announced, is there a connection between the events, is there more to the story?

Is there a policy change in the works that the Secretary could not support?

Is the Secretary’s announcement and decision re: the US nuclear weapons complex, announced recently at issue?

Is the incoming Republican majority in Congress and its threats to block any Iranian agreement, and go into another war, a broader, more dangerous multilateral, multiple opponent war, an issue here?

Members of the new Republican-controlled U.S. Congress that will be sworn in in January have already threatened to impose additional sanctions on Iran and may well have enough votes to overturn an expected veto of such legislation by President Barack Obama. New sanctions could very well derail the talks, as Iran has signaled they would be a deal breaker. — ABC