Moyers: Sleepwalking Into a Nuclear Arms Race with Russia

“Sleepwalking Into a Nuclear Arms Race with Russia”

Chuck Spinney and Pierre Sprey write for Moyers’ online (and Spinney’s Blaster blog) with a warning about a new nuclear arms race, one where ‘the nuclear issue boils down to a question of understanding how America’s spending decisions and actions impact patriotic Russians’

“Let’s see if we can make some good deals with Russia,” the Republican president-elect was quoted as saying.

“For one thing, I think nuclear weapons should be way down and reduced very substantially, that’s part of it. But Russia’s hurting very badly right now because of sanctions, but I think something can happen that a lot of people are gonna benefit.” 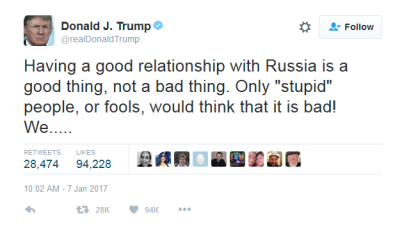