Carriers and battle groups as platforms for forward force projection. Next up, every ship as a platform for UAVs, drones of multiple use, shape and mission. A remote-guided future of war. DARPA envisions a SkyNet, force projection 360°

The United States Navy boasts a “battle force” of 273 ships. Of these, only 10 are actual aircraft carriers. But what if every U.S. warship could become an “aircraft carrier”?

Last month (March 2015), the Pentagon’s Defense Advanced Research Products Agency, DARPA, announced progress on an idea that promises to do just this… Wrapping up phase 1 of its Tactically Exploited Reconnaissance Node, TERN, program, DARPA said it is ready to proceed to phase 2… landing Reapers and other medium-altitude, long-endurance, or MALE, drones at sea, so that they can refuel, relaunch, and continue to hopscotch across the ocean, is key to extending the reach of America’s drone aircraft on a global scale.

The future of war more and more continues toward ‘smart’ warfare — computer-guided, super-intelligence, an array of strategic and tactical weapons, a multi-mission omnicapable 24/7/365 mix in which drones are taking on increased next generation roles. The 360° scope of future warfare envisions drone-units operating at every level of the projected battlefield… 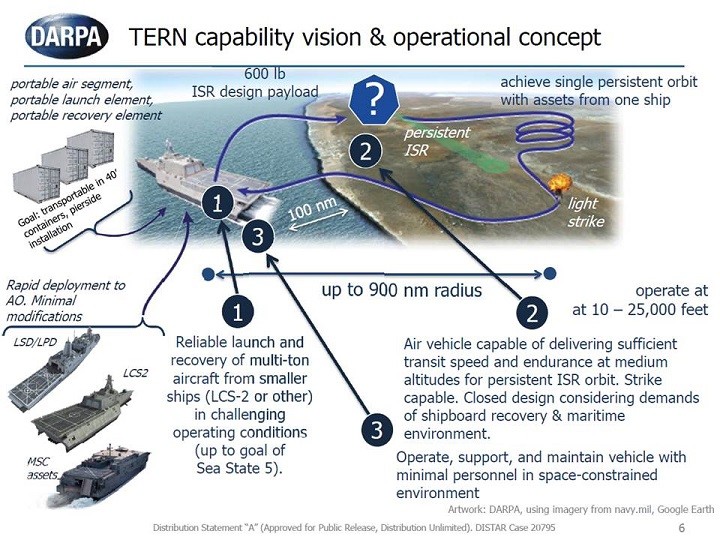 The PD-100 Black Hornet, manufactured by Prox Dynamics, is an air vehicle about the size of a man’s finger. The UAV weighs 18 grams and now contains day and night-vision cameras that send still images or video back to an operator via a data-link. Designed for reconnaissance, the vehicle is incapable of attack or defense. But its size and ability to fly autonomously or semi-autonomously make it a clear precursor to the next generation of swarm robots. Welcome to the future of warfare.

According to a recent report by the Center for New American Security titled “The Coming Swarm: The Quality of Quantity,” the military is going miniature.

DARPA last week (Jan 2015) put out a call for people with ideas for “revolutionary approaches to unmanned aircraft systems autonomy” to contribute in its Collaborative Operations in Denied Environment, CODE program, according to the announcement.

The object is to increase the capability and flexibility of military drones while reducing the cost of operation. DARPA’s outreach effort comes at a time when Congress and the Pentagon are re-evaluating the U.S. military’s technologic capabilities.

“Enemies and potential competitors are working every day to exploit vulnerabilities in our capabilities, U.S. Rep. Mac Thornberry (R-Texas), chairman of the House Armed Services Committee, said in a news release. “That includes developing technologies to offset areas of American military strength…”

For DARPA, improving drone technology is critical. The U.S. military, according to the trade group Association for Unmanned Vehicle Systems International, has invested nearly $20 billion for a projected 8,266 drones, ranging from Global Hawks, Predators and Reapers to smaller devices like WASPs, PUMAs and RAVENs that can be launched by hand. But while those systems have performed very well providing intelligence, surveillance and reconnaissance, as well as lethal strikes against al-Qaida, the Taliban, Islamic State and other current adversaries, DARPA said that “most of the current inventory is not well-matched” against more technologically advanced enemies who present “higher levels of threats, contested electromagnetic spectrum and re-locatable targets.”

“Just as wolves hunt in coordinated packs with minimal communication, multiple CODE-enabled unmanned aircraft would collaborate to find, track, identify and engage targets, all under the command of a single human mission supervisor,” said Jean-Charles Ledé, DARPA program manager, on the agency’s website.

Drones, which currently are flown individually, “are operated by large crews,” according to the DARPA announcement. “This is expensive and incompatible with an organic system able to react quickly to a dynamic situation,” according to DARPA.

The crews include a ground control station, pilot, sensor operators, intelligence operators and those who help launch, recover and maintain the drones. McClatchy News has reported that it takes up to 170 people to keep a Predator drone flying for 24 hours and about 300 to operate a Global Hawk.

The CODE program is geared to coping with a future where drones are more vulnerable to enemy attack by transforming their operations. Instead of multiple people to operate each one, DARPA would like to see one person able to command and control six or more unmanned vehicles simultaneously.

It is akin to “flooding the zone” in football, where a defender has to cope with several offensive players instead of just one, with the hope that he is overwhelmed.

“Commanders could mix and match different systems with specific capabilities that suit individual missions instead of depending on a single UAS that integrates all needed capabilities but whose loss would be potentially catastrophic,” DARPA says. “This flexibility could significantly increase the mission- and cost-effectiveness of legacy assets as well as reduce the development times and costs of future systems.”

Over the last 25 years, Unmanned Aircraft (UA, which in this concept includes cruise missiles, decoys, and other unmanned aircraft systems (UAS)) have proven to be very valuable tools for performing a wide range of missions from Intelligence, Surveillance, and Reconnaissance (ISR) to tactical strike, and the U.S. Armed Forces have invested heavily in a broad range of systems. However, most of the current inventory is not well matched to the needs of future conflicts, which DARPA anticipates being much less permissive, very dynamic, and characterized by a higher level of threats, contested electromagnetic spectrum, and re-locatable targets. In this environment, our current systems have several challenges:
– Systems have very limited ability to autonomously react to changes and either lack the flexibility to adapt to a changing situation (in the case of missiles) or are tightly tied to human operators (for UAS);
– Enhancing the survivability features of our current systems using traditional methods would be expensive or impossible;
– Systems at the tactical edge are working in isolation – instead of relying on nearby assets to augment their capabilities, they rely on distant strategic assets for critical functions such as navigation, off-board targeting, and communication;
– UAS are operated by large crews. This is expensive and incompatible with an organic system able to react quickly to a dynamic situation.
Collaborative autonomy has the potential to significantly increase the capabilities of legacy assets as well as to reduce the cost of future systems by composing heterogeneous teams of UA DARPA-SN-15-203 that can leverage the capabilities of each asset without having to duplicate or integrate capabilities into a single platform. Using collaboration algorithms, UA can provide services to each other, such as:
– Geo-locating targets with long distance sensors and guiding less capable systems within their sensor range,
– Providing multi-modal sensors and diverse observation angles to improve target identification,
– Transmitting critical information through the network,
– Providing navigational aid to disadvantaged assets, or
– Protecting each other by quantitatively overwhelming defenses and other stratagems.
Through these collaborative behaviors and others, the UA teams can achieve greater mission efficiency by, for example:
– Increasing area coverage for target detection or rapid task execution,
– Dynamically assigning tasks, or
– Optimizing team composition and resource usage based on mission needs.

CODE Track A integrators’ top level goals are to:
– Develop and demonstrate the value of collaborative autonomy in a tactical context;
– Rapidly transition the capability to the warfighter;
– Develop an enduring framework to expand the range of missions, platforms, and capabilities that can leverage collaborative autonomy; and
– Develop an open architecture that enables all members of the rich community of unmanned systems and autonomy researchers to contribute to current and future capabilities.

The solicitation doesn’t focus on new drone designs so much as helping very small drones — able to fit through an open window and fly at 45 miles per hour — navigate tight and chaotic indoor spaces without having to communicate with operators, get GPS directions, or receive data from external sensors. All the thinking, steering and landing would be in the drone.

“Goshawks, for example, can fly very fast through a dense forest without smacking into a tree. Many insects, too, can dart and hover with incredible speed and precision. The goal of the FLA program is to explore non-traditional perception and autonomy methods that would give small UAVs the capacity to perform in a similar way, including an ability to easily navigate tight spaces at high speed and quickly recognize if it had already been in a room before” … 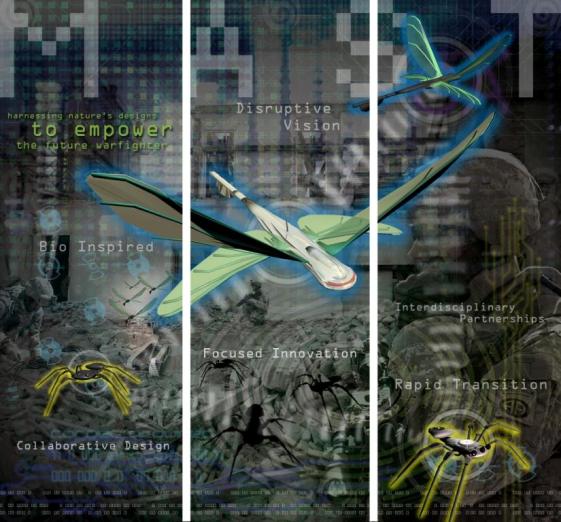 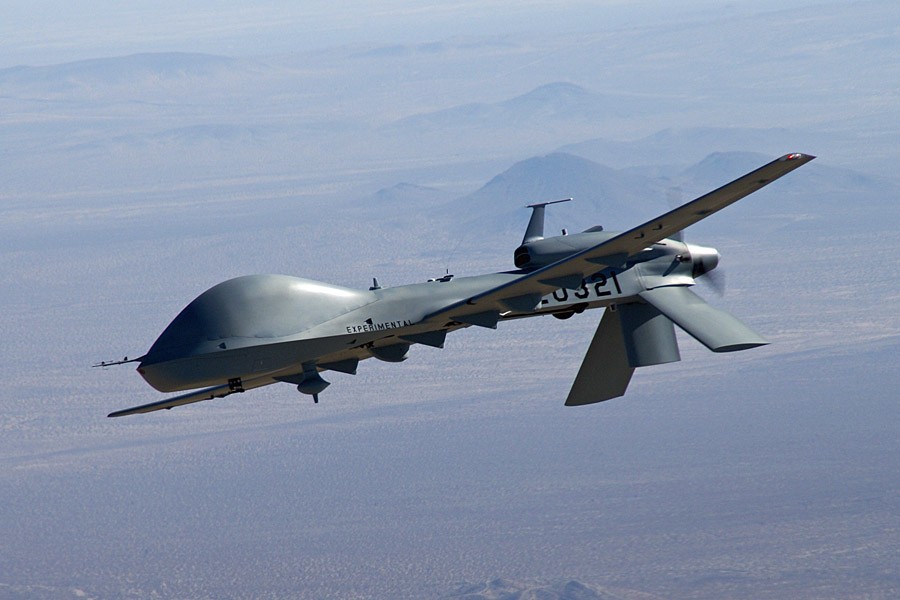