Questions of command and control are circulating. The former US Director of National Intelligence goes on record to worry about the President’s access to nuclear codes. Erratic decisions, speeches, and behavior of the US Commander in Chief are continuing to produce concern as the public and international community react 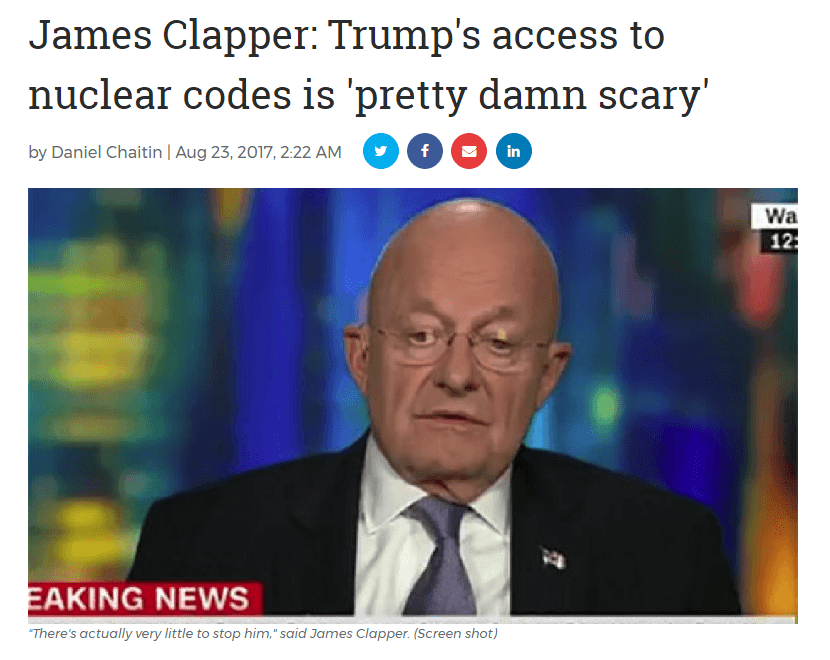 News of the World / US Politics

“In a fit of pique he decides to do something about Kim Jong Un, there’s actually very little to stop him. The whole system is built to ensure rapid response if necessary. So there’s very little in the way of controls over exercising a nuclear option, which is pretty damn scary.”

Rep. Andre Carson: Trump’s ‘erratic behavior’ should be a concern

Trump Tweet-Dares Clapper to Release “Beautiful Letter” That Was, in Fact, a Form Letter

This Former Intelligence Official Questioned Trump’s Fitness for Office. So Trump Tweeted at Him

Trump Fires Back at Clapper for Questioning His Fitness for Office

Clapper Explains the ‘Beautiful Letter’ Trump Tweeted He Sent Him

Trump Hits Back At James Clapper, Who Questioned POTUS’ Fitness For Office

Trump blasts Clapper, who questioned his fitness for office

Trump Lashes Out at Clapper for Questioning His ‘Fitness’ for Presidency

Trump rips Clapper, who questioned his fitness for office

‘Lying to Congress’: Trump lashes out at former spymaster over CNN comments

Trump lashes out at James Clapper

Read This From a Teleprompter: Donald Trump Is Unfit to Serve

Center for Research on Globalization

Trump Takes Aim at the Press, With a Flamethrower

Three personas in three speeches, but the same president

Clapper: Trump sounds like Jekyll and Hyde in different speeches

Anderson Cooper Slams Trump’s Rally Speech: ‘Last Night, What We Saw Was All About Him’

Can Anyone Stop Trump From Launching Nuclear Weapons?

The Times of Israel

Clapper: ‘How Much Longer Does the Country Have to… Endure This Nightmare?’

‘Very little’ in Trump’s way if he orders nuclear attack

‘DOWNRIGHT SCARY AND DISTURBING’: James Clapper questions if Trump is ‘looking for a way out’

‘I worry about the access to the nuclear codes.’ Obama’s last national intelligence head says he questions Trump’s …

A little scary, a lot misleading

NBC Aghast at Trump’s ‘Tirade’; Might Be ‘Threat to National Security’

Former intel boss questions Trump’s ‘fitness to be in office,’ suggests he’s ‘looking for a way out’

Questions about Trump’s mental health are spilling into the open. Let’s be careful.

James Clapper: I Question Trump’s Fitness For Office, Wonder If He Is “Looking For A Way Out”

Fmr DNI Clapper: I Question Trump’s Fitness for Office – ‘He Certainly Could Be’ a National Security Threat

CNN’s Don Lemon: Trump “is clearly trying to ignite a civil war in this country”

GOP strategist goes there after Trump’s speech, says he “obviously is mentally unstable”