Question of the Day

Article Five… Ask the question of questions: How will the U.S. administration respond if Russia retaliates militarily against Turkey, a NATO ally

Ankara buys nearly 60 percent of its total gas needs — around 27 billion cubic meters (bcm) — from Russia via two main pipelines, which enter Turkey through the Marmara region, the country’s industrial hub which includes Istanbul, its biggest city, and the most sensitive area to any disruption in supply.

Russia moves at UN on Resolution 2199 and additional sanctions against Turkey (via Asia Times – 1, 2) 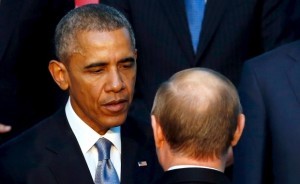 Nov 30: As Presidents Obama and Putin meet today ‘on the sidelines’ of the global climate summit in Paris, one question on the table, one that spies of the world will lean in to hear and subsequently monitor all available elint/humint/sigint, is how these commanders-in-chief will act to move their positions forward.

On the shoot down of the Russian SU-24 bomber:

“This was a military provocation, a violation of international law. And we have to understand unequivocally that the order came not from Ankara, but rather from Washington. We cannot exclude the fact that at the controls of the F-16 there was an American pilot. They have military bases there [in Turkey], military cooperation established. This option cannot be excluded,” said Russian Parliament deputy Vyacheslav Tetekin…

Russian Foreign Affairs representative Sergei Lavrov: “Some members of the coalition, including those that provided their warplanes to conduct the strikes on the territories of Iraq and Syria, told us confidentially that—because the aircrafts used in their Air Force are of American production—Americans demand from these members of coalition to ask for US permission for such an action before doing any strikes,” said Mr. Lavrov. “I wonder if this demand by the Americans includes Turkey too. And if it does, then I wonder if Turkey asked for permission from the United States to put their aircrafts in the air and to shoot down the plane over Syrian territory.” … “The American coalition began to fly over Iraq and Syria—by the way, without agreement from the Syrian government—more than a year ahead of us. They saw everything but for some reason didn’t touch the illegal oil trade.”

Nov 25 — MOSCOW (AP) — In a move raising the potential threat of a Russia-NATO conflict, Russia said Wednesday it will deploy long-range air defense missiles to its base in Syria and destroy any target that may threaten its warplanes following the downing of a Russian military jet by Turkey. The incident was the first time in half a century that a NATO member shot down a Russian plane. If Russia responds by downing a Turkish plane, NATO member Turkey could proclaim itself under attack and ask the alliance for military assistance. The S-400 missiles, which Russian President Vladimir Putin ordered sent to the Hemeimeem air base in Syria’s coastal province of Latakia, just 50 kilometers (30 miles) away from the border with Turkey, are capable of striking targets within a 400-kilometer (250-mile) range with deadly precision…

“It will be ready to destroy any aerial target posing a potential danger to our aircraft,” Russian Defense Minister Sergei Shoigu said at a meeting with military officials. He also announced the severance of all military ties with Turkey and said that from now on, Russian bombers will always be escorted by fighters on combat missions over Syria.

Ozgur Unluhisarcikli, director of the German Marshall Fund in Ankara, said it is possible Russia could down a Turkish plane.

“Turkish planes violate the Syrian border daily, either for reconnaissance flights or for anti-IS operations,” he said. “In the same way that Turkey argues it has rules of engagement, Russia could also declare its own rules of engagement, saying it has the right to protect the skies of its ally.”

The Red Line and the Rat Line: Sy Hersh on Obama, Erdoğan and the Syrian rebels

The U.S. is obligated to defend any country that invokes Article Five of the alliance’s founding treaty, which treats an attack against one member as an attack on all.

The Parties agree that an armed attack against one or more of them in Europe or North America shall be considered an attack against them all and consequently they agree that, if such an armed attack occurs, each of them, in exercise of the right of individual or collective self-defence recognised by Article 51 of the Charter of the United Nations, will assist the Party or Parties so attacked by taking forthwith, individually and in concert with the other Parties, such action as it deems necessary, including the use of armed force, to restore and maintain the security of the North Atlantic area.