53 years ago today, at the height of the Cuban Missile Crisis, second-in-command Vasili Arkhipov of the Soviet submarine B-59 refused to agree with his Captain’s order to launch nuclear torpedos against US warships and beginning a nuclear war between the superpowers

The U.S. had been dropping depth charges near the submarine in an attempt to force it to surface, unaware it was carrying nuclear arms. The Soviet officers, who had lost radio contact with Moscow, concluded that World War 3 had begun, and 2 of the officers agreed to ‘blast the warships out of the water’. Deputy Commander (and Flotilla Commander) Vasily Arkhipov refused to agree – unanimous consent of 3 officers was required – and thanks to him, we are here to talk about it.

His story is told in the PBS documentary, ‘The Man who Saved the World‘: 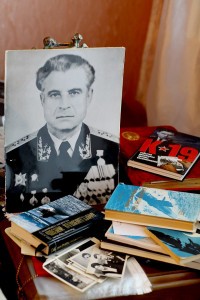 Today in October 2015, we consider the intro of next generation nuclear weapons — B61-12s carried by F-35s in Europe and ‘hot’ theaters as of 2020 — a decision that will rekindle a new nuclear standoff.

Escalation and proliferation are again underway, as we recall old ‘close call’ days…

When discussing the Cuban Missile Crisis in 2002, Robert McNamara, U.S. Secretary of Defense in the era, publicly acknowledged the near-cataclysmic reality:

“We came very close” to nuclear war, “closer than we knew at the time.”