Donald Trump and Kim Jong-un to confer in Hanoi 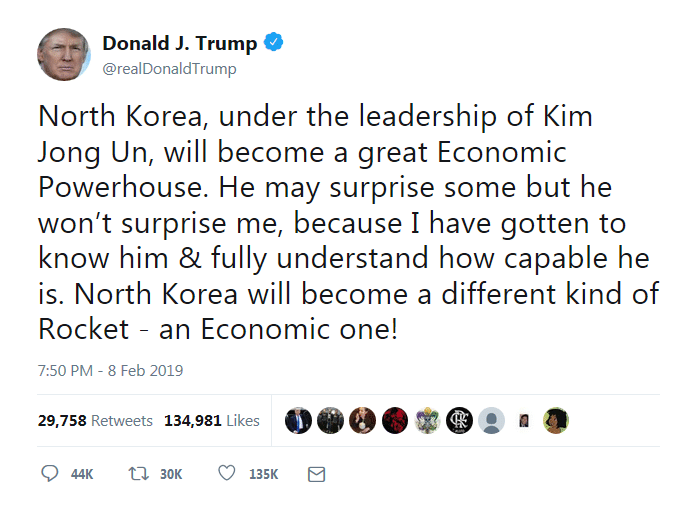 “My representatives have just left North Korea after a very productive meeting and an agreed upon time and date for the second Summit with Kim Jong-un. It will take place in Hanoi, Vietnam, on February 27 & 28” …

Trump announced on Twitter. “I look forward to seeing Chairman Kim & advancing the cause of peace!”

“The choice of Hanoi will make even more sense if the two parties are joined by the Chinese and South Korean delegations in case they reach an agreement to make a declaration to formally end the Korean war, as there will be more available resources in Hanoi to meet security, logistic and media needs of such a big event.”

“We feel that Vietnamese economic and political environments are balanced, and when it is hosted in Vietnam, we feel that we can have some contribution in the process and can enhance our international position.”

“We hope that North Korea can consider the example of economic development of Vietnam … If they can develop some kind of reforms like in Vietnam that would offer more opportunities and will accelerate the development of North Korea.”

The Vietnam war and Korean war are a solemn memory as the nations meet.

The Korean war from June 1950 to July 1953 ended with an armistice, but no peace treaty has  yet been signed.

“The fact that we’re cooperating — and not fighting — is proof that when a country decides to create a brighter future for itself alongside the United States, we follow through on American promises,” Secretary of State Mike Pompeo said during a trip to Hanoi last summer.

“The miracle could be your miracle,” Mr. Pompeo added referring to North Korea.

How far the overtures go — toward de-nuclearization of the Korean peninsula and more or again to threats and more, is now on the table.