The future is overcast and the horizon foggy. The aftermath of the riot in Charlottesville is just beginning to be wrought. The consequences of words and policies, action and non-action will define the American experiment going forward. The American president wavers, then shocks with his remarks

Americans polled about the violence in Charlottesville: The answers are ugly 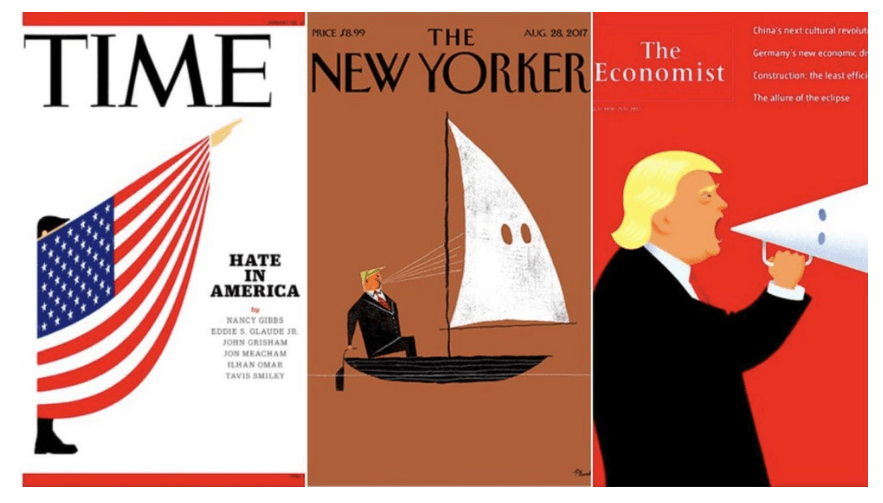 Which side—the white nationalists or the counter-protesters—bears greater responsibility for the Charlottesville violence, which directly resulted in the death of a 32-year-old counter-protester? It should be a factual question. And also a moral one, considering that the demonstrators had gathered in the spirit of a homegrown terror group that lynched thousands of blacks and a foreign one that murdered around 6 million Jews.

Yet in the America of the moment, the question is a political one.

Only 18% of Republicans blame the white-nationalist groups for the bulk of the Charlottesville violence, according to a SurveyMonkey poll… Some 64% think both sides share responsibility equally. Perhaps more alarmingly, only 46% of all Americans put the blame on the white nationalists, while four in 10 condemn both sides equally. 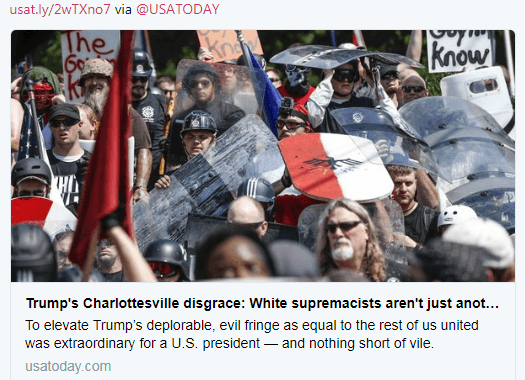 White supremacists aren’t just another ‘side’

To elevate Trump’s deplorable, evil fringe as equal to the rest of us united was extraordinary for a U.S. president — and nothing short of vile.

President Trump is not known for holding back his rage and venom when he’s angered or feels threatened, or for struggling to “counter punch.” Typically, the easily triggered leader of the free world, his finger seemingly perpetually poised in hover position over the nuclear button, uses a cannon when a BB gun will do. But, curiously, he seems to lose his voice and his nerve when it comes to taking on Russian President Vladmir Putin for intervening in U.S. elections, or the white nationalists and Nazis — domestic terrorists — who marched with torches in Charlottesville, Va.

Notice whom Trump tiptoes around to understand to whom he feels beholden.

It’s becoming increasingly harder to deny that Trump’s actions and words make it appear as if he’s reluctant to cross a benefactor or those who comprise a disturbingly influential portion of what we must, if we are to be intellectually honest, accept and admit is his base.

His tepid, tardy response to the shameful group of Americans (and it hurts to call them Americans) was stunning, coming on the heels of his knee-jerk “fire and fury” threat to North Korea’s Kim Jong Un after yet another missile test — and his equally reckless, violent follow-up threats about military action.

The gentler, vaguer “diplomatic” language used by Trump on alt-right white nationalists proudly using the Nazi salute and sporting swastikas is chilling. He didn’t name them or even blame them, in fact said “hatred, bigotry and violence” had been going on “for a long, long time” and came from “many sides.”

It was reminiscent of candidate Trump in Feburary 2016 finding it difficult to denounce former KKK leader David Duke for telling his followers it would be “treason to your heritage” to vote for anyone but Trump. He told CNN’s Jake Tapper he simply didn’t know enough about Duke and the KKK to condemn them.

In Charlottesville, Duke said on camera that the white supremacists were marching on behalf of President Trump, and that they viewed this as fulfilling the promises of Trump’s candidacy.

Trump gave him legitimacy by placing the KKK, Nazis and other white supremacists on par with, well, everyone else.

Top Trump aides Steve Bannon and Stephen Miller are widely associated with white nationalism or the “alt right.” Duke praised Bannon’s appointment to a senior White House position, telling CNN “You have an individual, Mr. Bannon, who’s basically creating the ideological aspects of where we’re going,” and “ideology ultimately is the most important aspect of any government.” Peter Brimelow, who runs the white nationalist site VDARE, said Bannon connects Trump to the alt-right movement online, adding: “I think it’s amazing.”

Miller, a hero of the alt-right, was influential in shaping Trump’s Muslim travel ban and his extreme immigration proposals. He’s now a top name Trump is considering as his latest communications director.

The escalation of blatant racial hatred by the white supremacists with their torches and Nazi salutes should have been addressed with at least the same “fire and fury” as Trump’s ill-advised cheap bravado on North Korea. Instead, after nearly a full day of silence, the president inexplicably claimed there was fault on “many” sides.

There are not “many” sides. We are Americans living our lives. We are Americans of all stripes, creeds, colors and ethnicity. To elevate Trump’s deplorable, evil fringe as a “side” equal to the rest of us united was extraordinary for a U.S. president — and nothing short of vile.

Donald Trump carefully, purposefully, and strategically established moral equivalency between the Nazis and white supremacists in Charlottesville, and those protesting them. Can you imagine Winston Churchill or Franklin D. Roosevelt bestowing similar moral equivalency on Hitler’s Nazi Germany and the millions of allied troops fighting and dying to rid the planet of such evil?

Charlottesville, tragically, will now serve as a mecca for white supremacists who firmly believe that with Trump, their day has finally, at long last, arrived.