It doesn’t take a Kissinger to see how nations respond to threats. It doesn’t take a Balance of Power theory to explain why when one nation throws out arms control and races to build a next generation of new nuclear weapons, then other nations will race to not become a hostage to hard power. So it goes in 2020 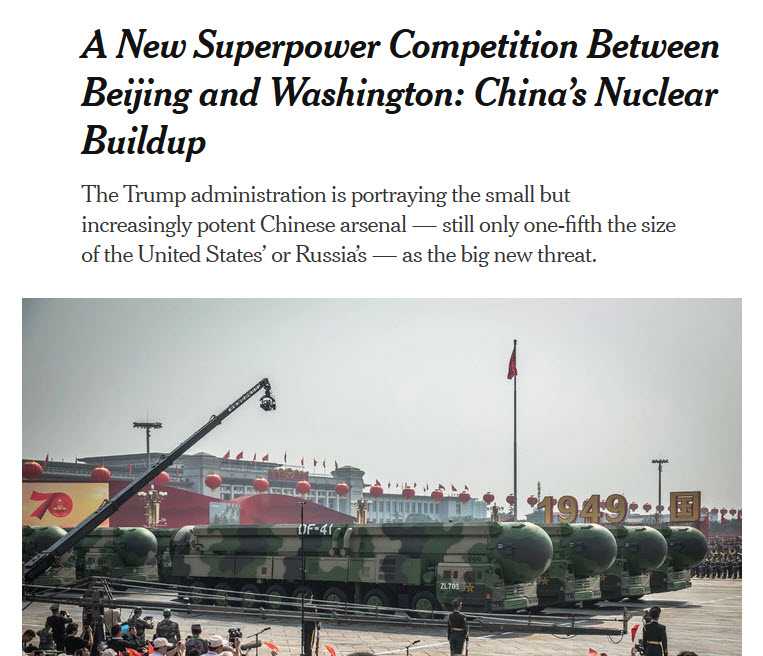 On the Nuclear Beat

David Sanger and Bill Broad of the NY Times cover national security issues and when the US and Russia sat down last week to begin nuclear arms control talks regarding one of the last nuclear treaties, New START, that’s still in effect after a domino-like collapse of nuclear weapons control agreements, a surprise awaited the Russians.

Here is how it was described by the Times reporters.

When negotiators from the United States and Russia met in Vienna last week to discuss renewing the last major nuclear arms control treaty that still exists between the two countries, American officials surprised their counterparts with a classified briefing on new and threatening nuclear capabilities — not Russia’s, but China’s.

The intelligence had not yet been made public in the United States, or even shared widely with Congress. But it was part of an effort to get the Russians on board with President Trump’s determination to prod China to participate in New START, a treaty it has never joined. Along the way, the administration is portraying the small but increasingly potent Chinese nuclear arsenal — still only one-fifth the size of those fielded by the United States or Russia — as the new threat that Mr. Trump and President Vladimir V. Putin of Russia should confront together.

Marshall Billingslea, Mr. Trump’s new arms control negotiator, opened his classified briefing, officials said, by describing the Chinese program as a “crash nuclear buildup,” a “highly alarming effort” to gain parity with the far larger arsenals that Russia and the United States have kept for decades.

The American message was clear: Mr. Trump will not renew any major arms control treaty that China does not also join — dangling the possibility that Mr. Trump would abandon New START altogether if he did not get his way. The treaty expires in February, just weeks after the next presidential inauguration.

The starting point of the new nuclear weapons era and run up is unknown. Two Times writers stating  without qualification or evidence that China has “only 300 long-range nuclear weapons deployed” is not a starting line for nuclear arms agreement. Unlike the verification of nuclear weapons required by New START, where “1,550” nuclear weapons are monitored and allowed by Russia and the US,  the Chinese nuclear arsenal is unknown and subject to estimates. Salient fact: China’s nuclear weapons program and arsenal has been responding to over a decade of US nuclear weapons build up and “modernization”. The US nuclear race began in earnest in the Obama administration, pushed by Republicans in leveraged Senate and House negotiations. The US nuclear increases in budget, speed and prominence and public new Nuclear Posture plans in both the Obama and Trump administration have, without doubt, changed the balance of power. The result? The Chinese and Russians have moved to meet and match the projected threats they see. Nothing exists in a vacuum within an earth-bound world.

Welcome to a much less secure world. The consequences of the Trump administration nuclear policy have yet to be seen, but many are describing the new nuclear threats as ominous, unpredictable and outside the realm of sane policy.

The former US CIA Director explains:

“The notion of trying to pull the Chinese into that agreement is, in theory, a good idea. In practice? Impossible,” former Defense Secretary Robert M. Gates said this month at the Center for Strategic and International Studies.

“The Chinese have no incentive whatsoever to participate,” said Mr. Gates, who as the C.I.A. director confronted China over its sale to Iran of missiles designed to carry nuclear warheads. And if Mr. Trump continues on the current course, Mr. Gates said, he will end up essentially inviting “the Chinese to build dramatically more, far more, nuclear weapons than we think they have at the current time to get level with the United States.”

US allies are pushing for nuclear capabilities, Russian allies are pushing for nuclear power plants and they are being rushed into production, China has its nuclear programs accelerating as the US president continuously threatens. North Korea, an ally of China with a mutual defense agreement that is rarely discussed publicly, is a wild card as a deadly nuclear game is being played.

Multiple issues of command and control are in play. A history of miscalculations, technological failures, and close calls are replete.

How much longer can this nuclear game go on? Strategic Demands again calls for ‘New Definitions of National Security’. The world is changing and we must change. Former Secretary of Defense William Perry’s warning of nuclear war is not to be ignored. We are running a nuclear game offering false security. Nuclear weapons and nuclear war are a dead end game.