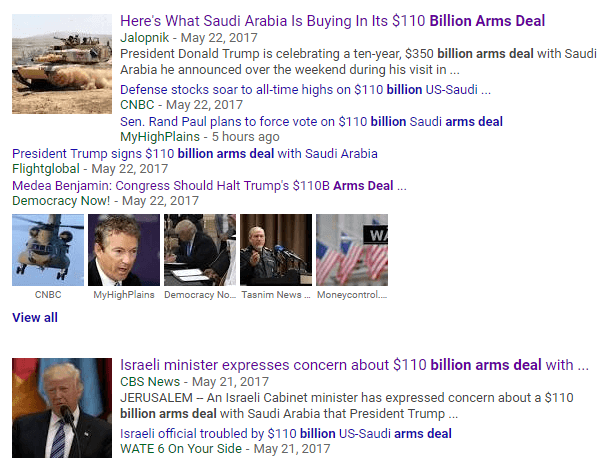 Noting that a significant part of the deal was already agreed to and signed during the Obama administration and the consequences of pumping billions more in arms into the Mideast will expand wars throughout the region.

“A Generation in Search of a Future”

Our government has become preoccupied with death, with the business of killing…  I think that what we are up against is a generation that is by no means sure that it has a future…

The thought that we’re in competition with Russians or with Chinese is all a mistake, and trivial. We are one species, with a world to win. There’s life all over this universe, but the only life in the solar system is on earth, and in the whole universe we are the only men.

Our business is with life, not death. Our challenge is to give what account we can of what becomes of life in the solar system, this corner of the universe that is our home; and, most of all, what becomes of men—all men, of all nations, colors, and creeds. This has become one world, a world for all men and women. It is only such a world that can now offer us life, and the chance to go on.

• Arrives in Israel … “I want you to know how much we appreciate the change in American policy on Iran, which you enunciated so clearly,” Israeli Prime Minister Benjamin Netanyahu said in joint remarks with Trump.

• At an earlier meeting with the Israeli leader at Jerusalem’s King David Hotel, Trump had lambasted the nuclear deal negotiated under his predecessor Barack Obama in remarks that Netanyahu could almost have drafted himself. He called the 2015 agreement a “terrible, terrible thing” and promised that Iran will never obtain a nuclear weapon, “that I can tell you.”

“Iran negotiated a fantastic deal with the previous administration. … It is unbelievable from my standpoint.”

Left unmentioned, as the president speaks of an “unbelievable” arms control deal with Iran, is the history of Wahhabi/Salafi sectarian influence throughout the region. Left unsaid is the condition of human rights/women’s rights/voting rights in Saudi Arabia, but the Saudi’s nemesis, the Persian people, even as they confront their own political past and array of issues, saw their newly elected president speak out:

“Mr. Trump arrived in the region at the time when he saw 45 million Iranians participating in the elections,” Mr. Rouhani said. “Then he visited a country that I doubt knows the definition of elections. The poor things have never seen a ballot box.”

He added, “I hope one day Saudi Arabia chooses this path.”

While meetings proceeded in Saudi Arabia, Israel’s former ambassador to the US, spoke of the need for the US to “match” the Saudi arms deal.

The ambassador re-interated in news interviews that the US was obligated under law (22 USC Sec. 2776) to ensure Israel’s qualitative military edge (QME) is maintained.

The 2008 legislation backed by AIPAC additionally requires the president to report to Congress periodically on actions taken by the administration to ensure Israel’s military advantage.

The delivery of new F-35 and their enhanced capabilities to delivery a full-spectrum of weapons has been seen as a ‘guarantee’, but with new weapons going to Saudi Arabia, additional demands are being made.

The spiral of weapons to the region will be continued with China/Russia and their delivery of new weapons systems, including to Saudi Arabia and Iran.

The geopolitical position of Iran and its central Eurasian role as its people vote to support engagement with the West and European nations, delivers warnings of risks to come, even as trade with Europe, Russia and China, continues to grow rapidly.

Alliances based on strategic interests and energy supplies, and as part of the new Eurasia Belt and Road Initiative and expanded Asian infrastructure banking projects led by China continue to expand development and conflict.

The Iranian vote for president and re-election of Hassan Rouhani provides a dramatic counterpoint to president Trump’s visit to Saudi Arabia and Israel.

• “Mr. Trump arrived in the region at the time when he saw 45 million Iranians participating in the elections,” Mr. Rouhani said. “Then he visited a country that I doubt knows the definition of elections. The poor things have never seen a ballot box. He added, “I hope one day Saudi Arabia chooses this path.”