It doesn’t take genius to recognize the threat of weapons systems that go out of control. At every level of system guidance, a necessary component is redundancy and alt directives in the event of system failure. At the height of the Cold War and fears of accidental or unforeseen nuclear events, “fail-safe” controls were designed and deployed as essential. It did not take Peter Sellers and the movie Dr. Strangelove to make it clear in the popular imagination that  fail-safe was less-than-safe. In the military, as declassified history now demonstrates, the number of nuclear incidents, ‘close calls’ and ‘near misses’ were adding up and on all sides in international affairs and military decision-making the risks of cataclysmic war drove negotiations for sane nuclear arms reduction.

In the current era, as nuclear weapons modernization drives nations again toward a new age of nuclear escalation and risk, a new potential category of weapons threat arises. Those in the know say it’s time to take notice…. and take action.

On the “Third Offset”

Anti-access area denial, known as A2AD, refers to network-on-network warfare, is a primary focus of discussions of Third Offset. “It’s when your battlefield network collides against another one. And what the Third Offset says is how do you put learning machines, AI, and autonomous systems into the network to allow your network to prevail over an enemy’s network.”

The deputy was up front about why he, and others at the Pentagon, have been talking openly about the (AI) technologies it is looking at, citing it as part of the conventional deterrence strategy against near-peer competitors.

“We will reveal to deter and conceal for war-fighting advantage. I want our competitors to wonder what’s behind the black curtain,” Work said.

Third Offset strategy was awarded, according to public records, $18 billion dollars in the U.S. defense budget for 2017. “$3 billion is intended specifically for human-machine collaboration with another $1.7 billion earmarked for cyber and electronic warfare. Third Offset as originally conceived in November 2014 was a comprehensive method of extending US military advantage using long-term planning and technological advances in areas as diverse as extended-range air, undersea warfare, and complex system engineering, integration and operation.”

In recent statements, Work has given greater insight into five key points he is looking into over the next year:

The next 25 years of military concern, the Deputy has stated, will be primarily about competition between the ‘great powers’, specifically, the U.S., Russia and China.

Autonomous weapons select and engage targets without human intervention. They might include, for example, armed quadcopters that can search for and eliminate people meeting certain pre-defined criteria, but do not include cruise missiles or remotely piloted drones for which humans make all targeting decisions. Artificial Intelligence (AI) technology has reached a point where the deployment of such systems is — practically if not legally — feasible within years, not decades, and the stakes are high: autonomous weapons have been described as the third revolution in warfare, after gunpowder and nuclear arms.

Many arguments have been made for and against autonomous weapons, for example that replacing human soldiers by machines is good by reducing casualties for the owner but bad by thereby lowering the threshold for going to battle. The key question for humanity today is whether to start a global AI arms race or to prevent it from starting. If any major military power pushes ahead with AI weapon development, a global arms race is virtually inevitable, and the endpoint of this technological trajectory is obvious: autonomous weapons will become the Kalashnikovs of tomorrow. Unlike nuclear weapons, they require no costly or hard-to-obtain raw materials, so they will become ubiquitous and cheap for all significant military powers to mass-produce. It will only be a matter of time until they appear on the black market and in the hands of terrorists, dictators wishing to better control their populace, warlords wishing to perpetrate ethnic cleansing, etc. Autonomous weapons are ideal for tasks such as assassinations, destabilizing nations, subduing populations and selectively killing a particular ethnic group. We therefore believe that a military AI arms race would not be beneficial for humanity. There are many ways in which AI can make battlefields safer for humans, especially civilians, without creating new tools for killing people.

Just as most chemists and biologists have no interest in building chemical or biological weapons, most AI researchers have no interest in building AI weapons — and do not want others to tarnish their field by doing so, potentially creating a major public backlash against AI that curtails its future societal benefits. Indeed, chemists and biologists have broadly supported international agreements that have successfully prohibited chemical and biological weapons, just as most physicists supported the treaties banning space-based nuclear weapons and blinding laser weapons.

In summary, we believe that AI has great potential to benefit humanity in many ways, and that the goal of the field should be to do so. Starting a military AI arms race is a bad idea, and should be prevented by a ban on offensive autonomous weapons beyond meaningful human control.

http://www.futureoflife.org/awos-signatories (20K plus signatures as of April 2016)

(September 2015) LETHAL AUTONOMOUS weapons — robots that can select, attack, and destroy targets without human intervention — have been called the third revolution in warfare, after gunpowder and nuclear arms. While some ridicule the notion of killer robots as “science fiction,” more knowledgeable sources such as the British Ministry of Defence say they are “probably feasible now.” We are not talking about cruise missiles or remotely piloted drones, but about, for example, flying robots that search for human beings in a city and eliminate those who appear to meet specified criteria.

For decades, scientists in artificial intelligence have pursued fundamental research on the nature of intelligence, with many benefits for humanity. At the same time, the potential for military applications has been obvious. Two programs of the US Department of Defense — named FLA and CODE — provide hints of what the major powers have in mind. The FLA project will program tiny quadcopters to explore and maneuver unaided at high speed in urban areas and inside buildings. CODE aims to develop teams of autonomous aerial vehicles carrying out “all steps of a strike mission — find, fix, track, target, engage, assess” in situations in which enemy signal-jamming makes communication with a human commander impossible. The manager of the CODE program described the goal as building systems that will behave “as wolves hunt[ing] in coordinated packs.”

Up to now, the primary technical issue has been whether autonomous weapons can meet the requirements of international humanitarian law, which governs attacks on humans in times of war. The 1949 Geneva Convention requires any attack to satisfy three criteria: military necessity; discrimination between combatants and noncombatants; and proportionality between the value of the military objective and the potential for collateral damage. In addition, the Martens Clause, added in 1977, bans weapons that violate the “principles of humanity and the dictates of public conscience.” In April, Germany said that it “will not accept that the decision over life and death is taken solely by an autonomous system,” while Japan stated that it “has no plan to develop robots with humans out of the loop, which may be capable of committing murder.” Meanwhile, the United States, despite an official policy prohibiting fully autonomous weapons, argues that a treaty is unnecessary.

On the question of whether machines can judge military necessity, combatant status, and proportionality, the current answer is certainly no: artificial intelligence systems are incapable of exercising the required judgment. Many say that as the technology improves, it will eventually reach a point where the superior effectiveness and selectivity of autonomous weapons can actually save civilian lives, comparable to the use of human soldiers.

This argument is based on the assumption that, after the advent of autonomous weapons, the specific killing opportunities — numbers, times, locations, places, circumstances, victims — will be exactly those that would have occurred with human soldiers. This is rather like assuming that cruise missiles will only be used in exactly those settings where spears would have been used in the past. Obviously, the assumption is false.

Another line of reasoning used by proponents of autonomous weapons appeals to the importance of retaining “our” freedom of action — where “our” usually refers to the United States. Of course, the consequence of the United States retaining its freedom to develop autonomous weapons is that all other nations will develop those weapons too. Insisting on unfettered freedom of action in international relations is like insisting on the freedom to drive on both sides of the road: If everyone insists that they should have such freedom, the roads will be useless to everyone. When, in 1969, the United States took the unprecedented unilateral decision to renounce biological weapons — a decision that was pivotal in bringing about the biological weapons treaty — the motivation was self-defense. A report commissioned by then-President Nixon had argued persuasively that an arms race in biological weapons would lead many other nations to develop capabilities that would eventually threaten US security. Similar arguments apply to autonomous weapons; a treaty is the only known mechanism to prevent an arms race and the emergence of large-scale weapons manufacturing capabilities.

Of course, treaties are not foolproof. Violations may occur, and some argue that a treaty that prevents “us” (usually the United States) from developing a full-scale lethal autonomous weapons capability will expose “us” to the risk of defeat by those who violate the treaty. All countries need to protect their national security, but this is an argument for a treaty. Yes, there will be nonstate actors who modify pizza-delivery drones to drop bombs. The concern that a military superpower such as the United States could be defeated by small numbers of homemade, weaponized civilian drones is absurd. But some advanced future military technology, produced in huge numbers, might present a threat; preventing such developments is the purpose of a treaty.

In late July, more than 2,800 scientists and engineers from the artificial intelligence and robotics community signed an open letter calling for a ban on lethal autonomous weapons. Without it, we fear there will be an arms race in autonomous weaponry whose outcome can only be catastrophic. Where, exactly, will this arms race lead us?

Current and future developments in robotics and artificial intelligence will be more than adequate to support superior tactical and strategic capabilities for autonomous weapons. They will be constrained only by the laws of physics. For instance, as flying robots become smaller, they become cheaper, more maneuverable, and much harder to shoot down, but their range and endurance also decrease, and they cannot carry heavy missiles.

How can a tiny flying robot, perhaps the size of an insect, kill or incapacitate a human being? Human ingenuity will play a role. 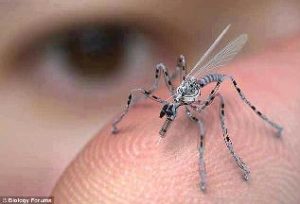 The two most obvious solutions — injecting with neurotoxin and blinding with a laser beam — are banned under existing treaties. It is legal, however, to deliver a one-gram shaped charge that suffices to puncture the human cranium and project a hypersonic stream of molten metal through the brain. Alternatively, the robot can easily shoot tiny projectiles through the eyeballs of a human from 30 meters. Larger vehicles can deliver microrobots to the combat zone by the million, providing lethality comparable to that of nuclear weapons. Terrorists will be able to inflict catastrophic damage on civilian populations while dictators can maintain a constant and visible threat of immediate death. In short, humans will be utterly defenseless. This is not a desirable future.