In Helsinki, at the Press Conference 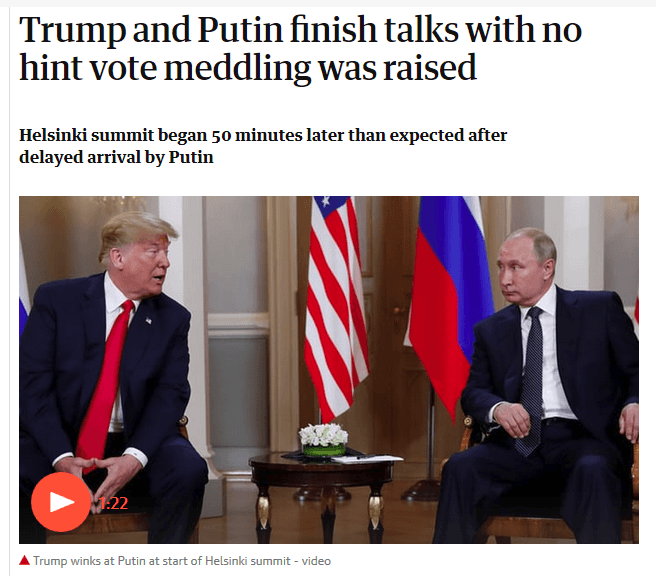 Jeff Mason, a reporter for Reuters, asked about Trump’s tweet this morning that US “foolishness and stupidity” damaged the relationship between the US and Russia.

Trump says “nuclear proliferation, in terms of stopping” is the most important thing for them to work on together.

He then moves onto the investigation into Russia’s interference in the 2016 US election.

“There was no collusion,” Trump says.

He says it has had a negative impact on the relationship between the “two largest nuclear powers in the world.”

Donald Trump and Vladimir Putin finished their highly sensitive talks in Helsinki after two hours, with no hint that Moscow’s election meddling was discussed.

Speaking after the meeting, the US president said: “I think it’s a good start. Very, very good start for everybody.”

Trump and Putin sat down for lunch after the talks, each flanked by six aides.

The leaders entered the gothic hall in the Finnish presidential palace for talks at 2.10 pm local time (1210 BST).

Excerpts of statements from Presidents Trump and Putin …

Putin (through Translator): We believe it necessary to work together further on — to interact on the disarmament agenda, military and technical cooperation. This includes the extension of the Strategic Offensive Arms Limitation Treaty. It’s a dangerous situation with a global American anti-missile defense system, it’s (ph) the implementation issues with the INF treaty. And, of course, the agenda of non-placement of weapons in space….

We are glad that the Korean Peninsula issue is starting to resolve. To a great extent, it was possible thanks to the personal engagement of President Trump, who opted for dialogue instead of confrontation.

We also mentioned our concern about the withdrawal of the United States from the JCPOA. Well, the U.S. — our U.S. counterparts are aware of our posture.

Let me remind you that thanks to the Iranian nuclear deal, Iran became the most controlled country in the world. It submitted to the control of IAEA. It effectively ensured the exclusively peaceful nature of Iranian nuclear program and strengthened the nonproliferation regime.

Trump: Constructive dialogue between the United States and Russia affords the opportunity to open new pathways toward peace and stability in our world. I would rather take a political risk in pursuit of peace than to risk peace in pursuit of politics. As president, I will always put (sic) what is best for America and what is best for the American people.

During today’s meeting, I addressed directly with President Putin the issue of Russian interference in our elections. I felt this was a message best delivered in person. Spent a great deal of time talking about it. And President Putin may very well want to address it, and very strongly, because he feels very strongly about it, and he has an interesting idea.

We also discussed one of the most critical challenges facing humanity: nuclear proliferation. I provided an update on my meeting last month with Chairman Kim on the denuclearization of North Korea. And after today, I am very sure that President Putin and Russia want very much to end that problem, going to work with us. And I appreciate that commitment…

We also agreed that representatives from our national security councils will meet to follow up on all of the issues we addressed today, and to continue the progress we have started right here in Helsinki.

Today’s meeting is only the beginning of a longer process, but we have taken the first step toward a brighter future and one with a strong dialogue and a lot of thought. 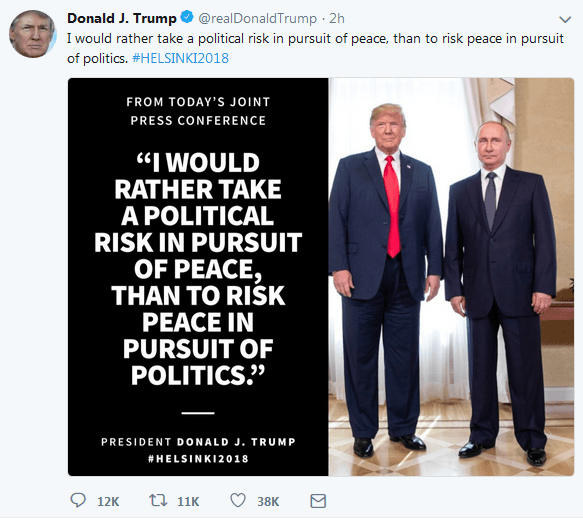