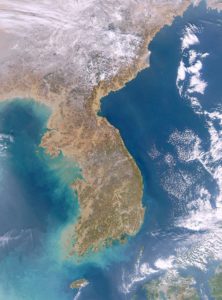 My take on the Summit That Shouldn't Happen | North Korea sets a dangerous trap for Trump. Disaster is far more likely than a Nobel. https://t.co/Ic56gE1mNu via @usatoday

US State Dept reaction to the news announcement —

“The Secretary [Tillerson] did not speak to the President and is unaware of the reason [for being fired].”

Strategic Demands’ editor re: the case for serious preparation… 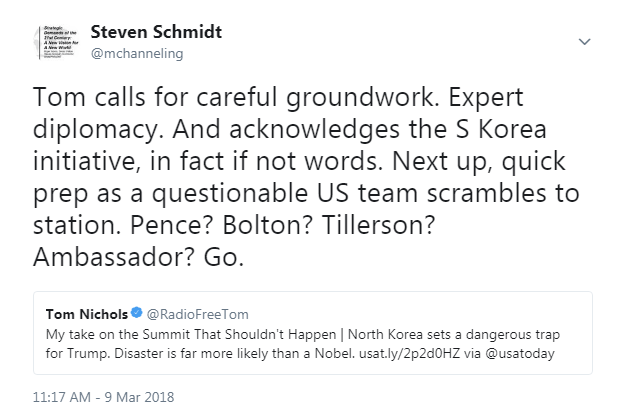 No easy path to success @SecDef19

There will be no easy path to success, but there is hope if the administration commits to preparing in these ways before a summit occurs: https://t.co/iYEXQjymdS

Why verification of any proposed North Korean denuclearization will be a tricky task: https://t.co/gP7YNQ4YEl

To what extent is the US State Department ‘in the loop’?

QUESTION: — can you tell us who came, who they met with, what message they brought with them?

MS NAUERT: So first, I can tell you that meeting is taking place, I believe, right about now. I think it started about 2:30 p.m. today over at the White House. So a lot of this I’m not going to get ahead of those meetings and I’m not, obviously, sitting in those meetings right now to be able to tell you any of the deliverables or what kinds of conversations are taking place right now.

I can tell you that from the State Department perspective, our Deputy Secretary John Sullivan is over there at the White House and he is engaged with those meetings. This is something we are pleased to support and pleased to host the Republic of Korea here to have those conversations about what the next steps will be.

QUESTION: Anybody else from the State Department or the administration who’s there?

QUESTION: And can’t speak to any other administration officials who are in that meeting?

MS NAUERT: I am familiar with who was there, but I’m not at liberty to say, so I’d have to have the White House, because it is their meeting, provide you that information.

QUESTION: Heather, thank you. Chung Eui-yong, who is the special envoy for the North Korea, he is also currently national security advisor in South Korea —

QUESTION: Chung Eui-yong, his name is.

QUESTION: Also he visit North Korea for the special delegations.

MS NAUERT: Okay. He was part of the delegation that went to Pyongyang. Okay.

QUESTION: But can you tell us the authenticity of what the South Koreans bring the message to President Trump?

MS NAUERT: Well, I can tell you this: We are closely coordinating with the Republic of Korea. I mean, it is no surprise that we are so closely linked in this and that they left Pyongyang and came to Washington, D.C. to brief us. That shows how closely coordinated and connected we are with our allies and partners in our ironclad relationship that continues very strongly today. So we look forward to the meetings that were – are underway right now. When I have something to provide you that has come out of those meetings, I would certainly be happy to bring it to you, okay?

MS NAUERT: Hey, how are you?

QUESTION: (Inaudible.) So there – I’ve heard reports that the delegation is going to be here through Saturday. Are there any planned meetings either here at the State Department or any of – anyone besides Deputy Secretary Sullivan planning to meet with the delegation while they’re still in Washington?

MS NAUERT: So I can’t rule out what might come out of the meeting that’s taking place right now. Who knows? They could come up with something and decide to all go out for pancakes together on Saturday morning. That I just don’t know, but do we have any formal meetings planned out of the State Department or for our deputy secretary? Nothing that I have to read out for you. If that changes and if I learn about it, I’d be happy to get back with you.

QUESTION: Will – hi. Will Sullivan – Deputy Secretary Sullivan be the point man on these conversations as they go forward – Sullivan – or will you have someone else? Will you ask Joseph Yun to stick around as someone with more expertise in the – in the field? What will the State Department be doing to participate in these (inaudible)?

MS NAUERT: Well as you well know, Ambassador Yun retired. He has left his service in the U.S. Government. I hope he’s on a beach somewhere enjoying a life with his family.

QUESTION: I wish we all were.

MS NAUERT: (Laughter.) Especially after having dealt with the North Korean issue. I can tell you that Deputy Secretary Sullivan is a very – a very shrewd man. He is a ferocious leader – reader, and leader. He is hard at work. I am fully confident that if he were the one who was chosen to lead these conversations from here on out, that he would be excellent at it. Other than that, we have our acting assistant secretary, our nominee to head EAP, Susan Thornton, who will remain extremely engaged in this, in any potential dialogue down the road. And we have other individuals here at the State Department who are more than capable of handling that as well.

QUESTION: So will Secretary Tillerson play a direct role, do you think?

Re: Secretary Tillerson in Africa speaking of North Korea on March 8th

(This statement comes as the State Department is holding a press conference without prior formal notice of the president’s decision, and the Secretary of State is ‘blindsided’ by the surprise announcement of the president.)