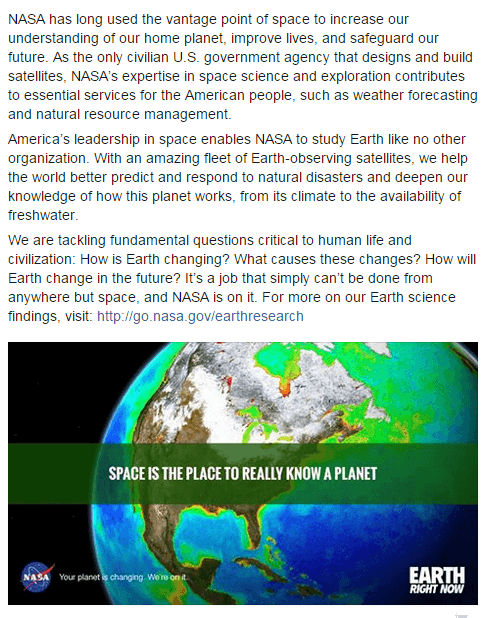 NASA Earth Science — We are tackling fundamental questions… how is Earth changing? What causes these changes? How will Earth change in the future

US Congress to Cutback Essential Science

Phil Plait: There’s no other way to put this, so I’ll be succinct: A passel of anti-science global warming denying GOP representatives have put together a funding authorization bill for NASA that at best cuts more than $300 million from the agency’s current Earth science budget. At worst? More than $500 million.

Rep. Eddie Johnson: Despite the fact that in January NASA announced 2014 was likely the warmest year since 1880, it should come as no surprise that the majority wants to cut funding for climate science. Embarrassingly, just last week, every single Republican member of this committee present voted against the notion that climate change might be caused by people.

“If enacted, the NASA authorization bill headed to the House floor later this month would do serious damage to the Nation’s space program, as well as to Earth-observation and Earth-science programs essential for predicting, preparing for, and minimizing the damage from disasters both natural and human-induced.

The bill’s cuts to space-technology development would not only risk continued U.S leadership in the space industry, but would also impede progress on precisely those technologies—on-orbit refueling, advanced space propulsion, radiation protection in deep space, and more—needed to make crewed missions to deep space a reality. In the absence of robust investments to bring these technologies into being, the goal of sending U.S. astronauts to Mars in the 2030s could be in jeopardy.

The House bill would also gut the NASA “mission to planet Earth”—the satellite observations and related research that provide key measurements and insights relevant to forecasting and tracking hurricanes, fighting wildfires, observing the state of the world’s farms and forests, mapping the extent of droughts, measuring the stocks of groundwater, and monitoring the likelihood of landslides. The draconian cuts in the House bill would also delay advances in our ability to research and prepare for volcanic eruptions, earthquakes, and tsunamis and blind us to changes in the Earth’s oceans and ice sheets that can be discerned only from space.

NASA’s mission to observe, understand, and explore the solar system and the cosmos beyond has long been matched in importance by its mission to use the unrivaled vantage point of Earth orbit for looking downward, to better understand the only home that humanity currently has. It is difficult to understand why, at this time of U.S. leadership in both the outward-facing and inward-facing facets of NASA’s operations in space, the Congress would want to undermine that leadership and sacrifice the panoply of benefits it brings to the Nation.”

Strategic Demands in association with GreenPolicy360 continue to visualize Environmental Security as a critical field of concern, study and development to advance national and global security

* Environmental Security as a field enabled by the rapidly developing Internet, connecting and bringing together ‘netizens’, science and political ideas which are newly defining and developing security concepts, objectives and goals

* Environmental Security as a recent element of earth exploration — earth systems/resources observation/monitoring by newly formed “New Space” companies and next generation earth-facing satellites. Planet APIs are being developed — the results of new ways of seeing will change concepts of citizenship.