Nuclear weapons brinksmenship has a new cold war player. Forgotten collective memory. The collective intelligence of the world’s nations has forgotten the lessons of the Cold War. A new Cold War 2.0 is heating up, everyday and like Global Warming, the existential threat is created by us

A Global National Security Threat, Us

The forces acting to create an Armageddon are reassembling.  The armies, under cover of darkness, a building and deploying next-generation nuclear strike forces, ones that are worldwide and claimed as indefensible. And few pay this ominous reality any mind, after all, the daily news is so full of political mayhem, who can be blamed for not having an eye on the big picture?

The forces of the End of Times are there though, using religious prophecy and claimed threats, and numbers, production numbers, defense budgets, spending that is rarely discussed in public, debated or audited.

Nuclear proliferation is again on the march as it were, ramping up, without an exit ramp.

A state’s Governor named Bruce King, a long-time politico in the state responsible for the ‘birth of the Bomb’ infamously and comically said, “boxes of Pandoras have been unleashed”.

He was not far off the mark.

DoD said in 2018 spending on nukes would peak at 6.4% of total DoD spending in 2029. That figure was always misleading, in part cause it didn’t include NNSA. 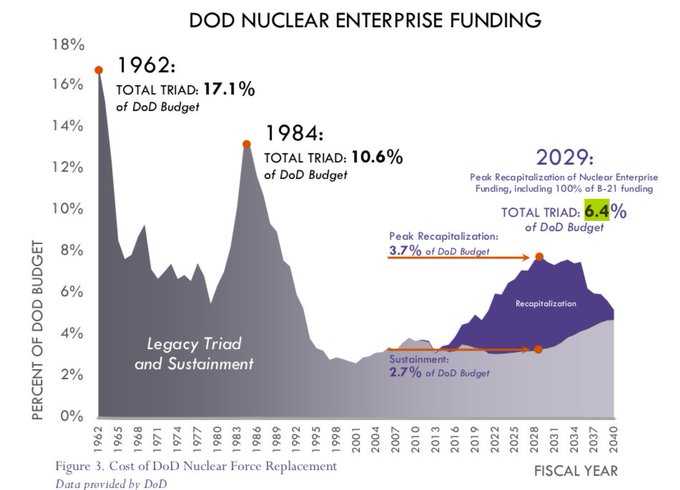 What about New Start’s ending?

Question is: What should the U.S. & Russia do?

A: Extend NST… or w/out NST, either side could try to upload warheads on SNDVs and exceed NST limits, but this would just lead the other side to reciprocate. Lose-lose. Or each side could agree to respect NST limits pending a new treaty.