The ‘long-awaited’ U.S. plan for Israeli-Palestinian peace was revealed today… by all accounts, Palestinian representatives had no part in the announced plan. It showed. The White House ceremony was presented as spectacle without the respective participants needed for peace

What is there to say?

We will all look more closely at the details of the U.S. proposal, a plan announced as a project of the U.S. president’s son-in-law, Jared Kushner. His ties to Netanyahu and far-right politics in Israel are well known. Yet, he was given the peace plan ‘portfolio’ to carry.

The president, Trump, today, is on trial at the center of an Impeachment process and Israel’s prime minister, Netanyahu, was indicted today on corruption charges. Both maintain their innocence and cast blame as they introduced a plan that begins with annexation of Palestinian land. Annexation, for religious and strategic reasons, is at the core of this. In classic military terms it is about controlling the ‘high ground’ above the narrow coastal region and extending to the Jordan River at the center of the plan for additional security, an ‘on the ground’ reality as Jared Kushner describes it.

A Sunday vote on annexation of settlements in the West Bank,  announced by the Associated Press, is being picked up by press reports internationally. Many moving pieces here…

(AP) Israel’s government will vote this weekend on annexing 30 percent of the West Bank, a move that comes just after President Trump rolled out his Middle East peace plan.

Israeli Prime Minister Benjamin Netanyahu said he would move forward on Sunday and ask his Cabinet to approve plans to annex West Bank territory, according to The Associated Press.

Despite the upcoming vote, Netanyahu’s government signaled annexation may not need to be approved by the Knesset, Israel’s parliament, and that only the Cabinet needs to sign off on the plan.

“Basically, this is the lifting of martial law and the implementation of Israeli law,” an Israeli government official told The Washington Post. “This does not require a Knesset decision.”

The plan creates a kind of Palestinian archipelago, a series of areas under their (limited) control interspersed with Israeli settlements. Though the Israelis would cease building new settlements on the West Bank, no Israeli settlements will be dismantled. That validates the years-long Israeli strategy of building settlements to create “facts on the ground,” i.e., areas with Jewish populations that could not be moved so as to prevent the creation of a contiguous Palestinian state.

The plan grants to Israel all of the Jordan Valley, meaning the Palestinian state would be completely surrounded by Israel on all sides.

Palestinians are required to give up any claims to land they were forced from in 1948 or since: “There shall be no right of return by, or absorption of, any Palestinian refugee into the State of Israel.”

Jerusalem, including both Jewish and Muslim holy sites, would remain under “unified” Israeli control, though the Palestinians would be permitted to establish their capital there in one area of the city.

Before a Palestinian state can be established, a series of requirements are imposed on the Palestinians on things like good governance and strong financial institutions; whether they have met those requirements will be determined by Israel and the United States. This means that the Palestinians will have to wait for Israel and the United States’ permission before the state of Palestine comes into existence, meaning that Netanyahu’s government or any future one could simply refuse to allow it indefinitely.

Which is precisely what Netanyahu would almost certainly like to do. As a sign of his bad faith, his government now says it will annex 30 percent of the West Bank as soon as this weekend.

As U.S. spokesperson and advocate for the plan, Jared Kushner begins his rounds of interviews and sales pitches.

It doesn’t go well from the start…

Appearing on CNN, Kushner tells Christiane Amanpour that the plan’s critics must “divorce [themselves] from all of the history” and focus on the deal itself, the ‘facts of the ground’, and the history of Palestinian ‘screw ups’…

You have 5 million Palestinians who are really trapped because of bad leadership. So what we’ve done is we’ve created an opportunity for their leadership to either seize or not. If they screw up this opportunity—which, again, they have a perfect track record of missing opportunities—if they screw this up, I think that they will have a very hard time looking the international community in the face, saying they are victims, saying they have rights. This is a great deal for them. If they come to the table and negotiate, I think they can get something excellent.

The Palestinian leadership have to ask themselves a question: Do they want to have a state? Do they want to have a better life? If they do, we have created a framework for them to have it, and we’re going to treat them in a very respectful manner. If they don’t, then they’re going to screw up another opportunity like they’ve screwed up every other opportunity that they’ve ever had in their existence.

To attempt to move beyond the history is a fatal flaw here. History is at the core of the conflict.

One has only to venture into the written history or today’s social media to hear and feel the deep beliefs held. It will take hard work to find agreement.

Attempting a unilateral settlement is far from a just resolution of historical ‘facts on the ground’ and generational grievances. 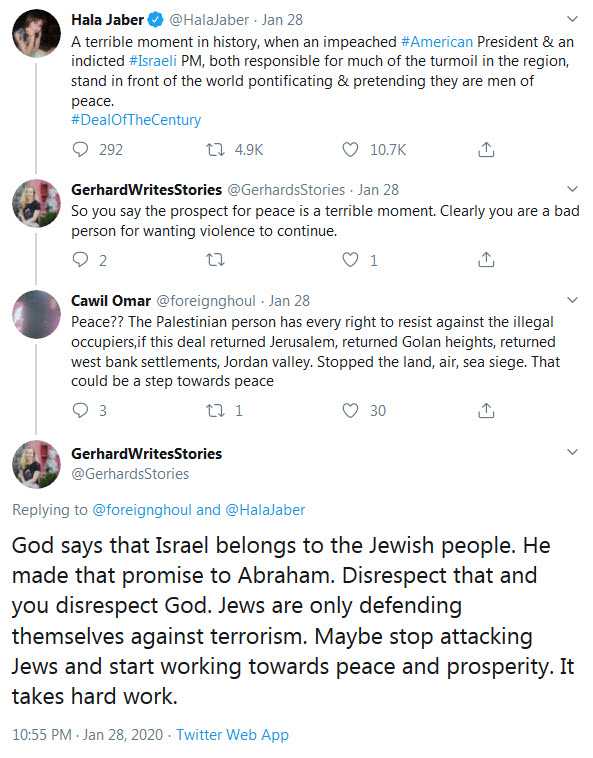