Yesterday: Why We Lost

I am a United States Army general, and I lost the “global war on terror.” It’s like Alcoholics Anonymous; step one is admitting you have a problem. Well, I have a problem. So do my peers. And thanks to our problem, now all of America has a problem… two lost campaigns and a war gone awry. 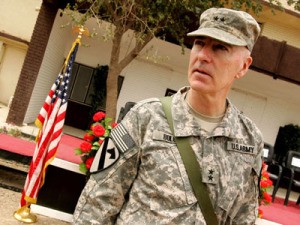 Daniel P. Bolger, the author of “Why We Lost”, retired from the United States Army last year as a Lieutenant General. His book on the wars in Afghanistan and Iraq was published on November 11, 2014. We have collected a few of the reviews and interviews, there aren’t many. Conspicuously absent, as of publication date, are reviews and discussion from the right in the US. The book should not be expected to go far up the NY Times best-seller list. The flag-waving that accompanied the wars supporters is absent.

Stories of valor and heroism have appeal, stories of loss and failure don’t.

There’s money and potential historic fame in going to war, there’s no money and few dwell on lost wars.

As the General put it: after his book, he expects to receive few Christmas cards from old friends.

In the real world, however, we are left to face realities, and lessons learned, as the US considers a widely expanded war in the Mideast, and sabers are being rattled for war against Iran, and many are speaking of a “new cold war.”

The costs of the wars in Afghanistan and Iraq are both direct and indirect. Direct spending is estimated to be in the range of 4 to 6 trillion USD (approx 1/3 of US debt).

And one has to go far afield to obtain estimates of indirect costs, as they range from opportunity costs, to civilian deaths (est. one million****), returned US veteran costs (300,000 US vets estimated with multiple Iraq war continuing symptoms*, 250,000+ with PTSD**, 700,000 incarcerated*** ), linkage and blowback extending the wars… civil costs of lost privacy rights, diminished Constitutional rights under a ‘war against terrorism’ and an expanding definition of militants and dissidents… move on to expanded conflict costs, to debt service costs (most of the Afghanistan-Iraq spending was ‘special appropriation debt spending’)… then there is, let’s call them, “competitive costs” (while the US spends on war, the competitors of the US, eg, China spend on infrastructure, economic development, apportioning trade surplus as debt-instrument lending to the US to finance the US wars…) As one begins to assess a full-cost accounting, one senses a larger loss and asking the question of ‘why we lost’ takes on greater dimension with greater security risks…

The General’s book bucks the trend to see these wars as “winnable”. The Washington tendency to “tax and spend” on war, vastly expanding national security state, on priorities that are not domestic or capital expenditures, or spending designed for economic growth and sustainable development, is a reality that hovers under the radar of public observation. Other topics capture interest. Ways to profit, not lose, are the order of the times.

However, the General’s book, since he was there and he has ‘insider knowledge’ very few have, is worth a closer look. An ‘editorial we’, a world population, are looking at twenty-five years of war since the first war in Iraq started up in 1990. The decisions of the US president and Pentagon, a Congress that approved an Iraq war against Iran, providing weapons and support, then a Congress that turned again to support Kuwait, Saudi Arabia and Israel against Saddam’s forces and missiles, was prelude to a widened war of ‘shock and awe’ then civil war, now indefinite term, regional and spreading, generational war.

A half-century war is not out of the question, a “long war”, with an expanding near-term and over-the-horizon threat spectrum is an increasingly high probability.

The General’s message is not to continue and repeat strategy and tactics that have failed. It is a timely message that has faint chance of being heard or followed, but for posterity it is a General’s message home and it’s worth a look and a listen. 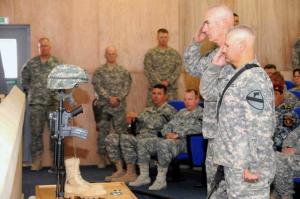 “I am glad to see someone of [Bolger’s] caliber tackling this subject.”
—Tom Ricks, ForeignPolicy.com, author of Fiasco: The American Military Adventure In Iraq

“With vigorous, no-nonsense prose and an impressive clarity of vision, this general does not mince blame in this chronicle of failure.”
—Kirkus, starred review

A General’s Inside Account of the Iraq and Afghanistan Wars

Daniel P. Bolger completed 35 years in the U.S. Army, retiring as a lieutenant general in 2013. He graduated from The Citadel and earned his master’s degree and doctorate from the University of Chicago. He commanded the Coalition Military Assistance Training Team in Iraq in 2005-06, 1st Cavalry Division in Baghdad in 2009-10, and NATO Training Mission-Afghanistan in 2011-13. His military awards include five Bronze Star medals (one for valor) and the Combat Action Badge.

General Bolger poses the following very important question many times in the book: “just who is the enemy?” At some point, totally exasperated, he concludes: “just about everybody”. This answer should have led General Bolger to start questioning why we are in Iraq, but he never does. He never realizes that we cannot endear ourselves to Iraqis (or to anybody else) by occupying their country, even if we intended to be as benign as possible.

While the US learned hard lessons and gained extremely valuable experience in how to fight modern wars against an enigmatic foe, we failed again to understand or factor the history of the places we opted to fight and more importantly, we underestimated the resolve, capability and culture of those we chose to fight against. US military might combined with GI ingenuity and professionalism led to overwhelming battlefield success at every turn. But, like Vietnam, strategic blundering not only negated the victories on the battlefield but sacrificed American lives for an ever-evolving mission with no apparent end.

From the NY Times (Op-Ed)

The Truth About the Wars

3-Star General Explains ‘Why We Lost’ In Iraq, Afghanistan

General Dan Bolger says what the US does not want to hear: Why We Lost

Why We Lost: Retired U.S. General Calls for Public Inquiry into Failures of Iraq, Afghan Wars

*Approximately 250,000 of the 697,000 U.S. veterans who served in the 1991 Gulf War are afflicted with ‘Gulf syndrome’, enduring chronic multi-symptom illness, a condition with serious consequences.

Most mortality increases in Iraq can be attributed to direct violence, but about a third are attributable to indirect causes (such as from failures of health, sanitation, transportation, communication, and other systems). Approximately a half million deaths in Iraq could be attributable to the war.
http://www.plosmedicine.org/article/info%3Adoi%2F10.1371%2Fjournal.pmed.1001533

US/ UN sanctions on Iraq of the 1990s, which interdicted chlorine for much of that decade and so made water purification impossible, are estimated to have killed another 500,000 Iraqis, mainly children. (Infants and toddlers die easily from diarrhea caused by gastroenteritis, which causes fatal dehydration).
http://www.juancole.com/2013/10/american-population-sanctions.html

At a minimum, 134,000 civilians have been killed by war’s violence since 2003 in Iraq. But, as described below, many deaths in Iraq were unreported or unrecorded: thus, this number, based on tallies of government and press reports, is an undercount. If a full recording of Iraqi violent deaths due to war were to be made, the toll could be twice as high, according to Iraq Body Count (IBC), the one organization that has attempted to document all the violent deaths in Iraq that have resulted from the initiation of war ten years ago. Thus, the toll of violent death due to war may be 250,000 or more people.

The number of Iraqi men, women and children who been seriously injured in the war is about the same as the number killed. In addition, many times the number killed by direct violence have likely died due to the effects of the destruction of Iraq’s infrastructure. Some of these numbers are disputed some officials might argue that this is an over estimate of the effects of war on Iraqi civilians; many more would argue that these estimates aren’t cautious.
http://costsofwar.org/sites/all/themes/costsofwar/images/Civilian_Death.pdf