The United Nations today adopted a landmark resolution to launch negotiations in 2017 on a treaty outlawing nuclear weapons. This historic decision heralds an end to two decades of paralysis in multilateral nuclear disarmament efforts.

At a meeting of the First Committee of the UN General Assembly, which deals with disarmament and international security matters, 123 nations voted in favour of the resolution, with 38 against and 16 abstaining.

The resolution will set up a UN conference beginning in March next year, open to all member states, to negotiate a “legally binding instrument to prohibit nuclear weapons, leading towards their total elimination”. The negotiations will continue in June and July.

The ‘No’ votes came from the nuclear weapons states, and U.S. allies in NATO, plus Japan, South Korea and Australia, which have treaty ties to the U.S., and consider themselves to be under the protection of the ‘U.S. nuclear umbrella.’

Four nuclear weapons states broke ranks, with China, India and Pakistan abstaining, and North Korea voting in favor of the treaty negotiations. In addition, the Netherlands defied intense pressure from the rest of NATO and abstained, as did Finland, which is not a member of NATO but has close ties with the alliance.

The German Press Agency reported: “Due to U.S. pressure, 27 of the 28 NATO member states voted against the resolution with the Netherlands abstaining.” 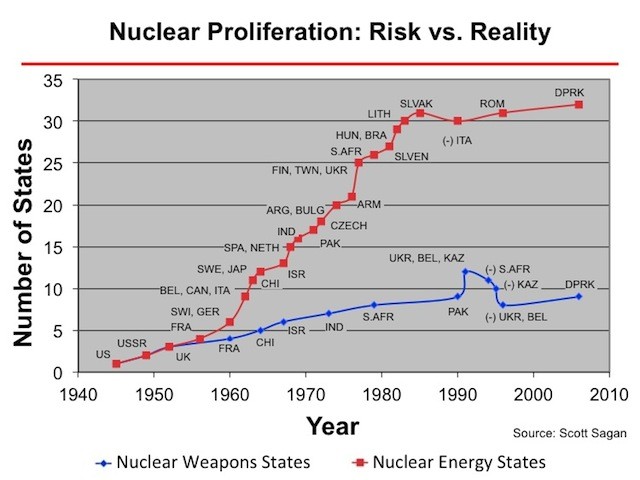 Years ago, your StratDem editor worked as a consultant to assist the Los Alamos Study Group. Working relationships I developed in Washington DC over the years, especially with Congressman George E. Brown and Senator Paul Wellstone, became key go-to channels. My close political relationship with Congressman Brown began in the mid 1960s, when he first began ‘mentoring’ me on nuclear issues after convincing me to enter a political life as a young man who was debating nuclear proliferation — often against Jesuit-educated students.

Today, a Jesuit pope, the first Jesuit educated pontiff, has adopted the name of Francis in honor of the saint of the environment and has quickly brought the Catholic Church to a new position on larger, existential issues globally, including environment, health and security. The Church and its over 1 billion+ followers are now looking at new ways to see the world — and the vision of a nuclear-free world is up for consideration.

I look back to the 1990s, twenty+ years after I first met George Brown and a few years after meeting and talking with Pope John Paul. I was then living in Santa Fe, a city name after St. Francis when I first began advising the Los Alamos Study Group. I arranged meetings with George Brown to discuss ‘big science’ issues and nuclear drawdown issues that the Congressman supported in his roles over the years, including as chair of the House Science Committee. George Brown was a visionary leader and the nation lost a patriot when he passed away in 1999.

The Los Alamos Study Group’s director, Greg Mello, continues to bring unique perspective on the national labs in New Mexico where the nuclear weapons were first created and, as often is said, a ‘nuclear priesthood’ maintains the weapon system designs and capabilities. The new trillion dollar “modernization” of the US nuclear weapon complex, systems and capabilities is, to a significant extent, going to be offered up by these physicists and engineers of the nuclear age. 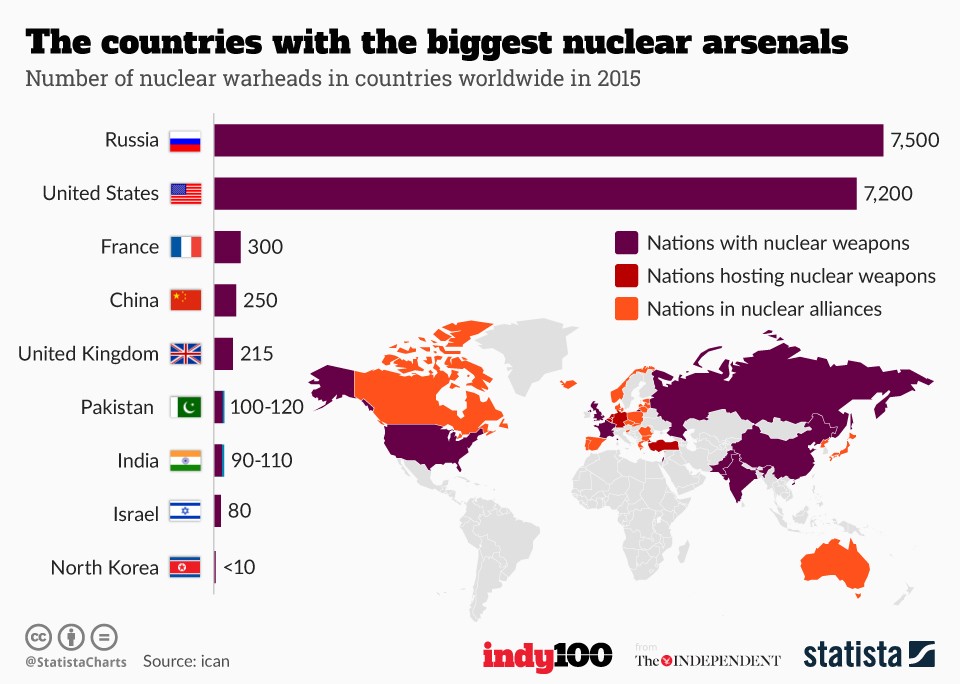 At the same time, the nuclear age is changing from a US dominated nuclear world to a multi-polar world, even as the ‘communist threat’ ended with the collapse of the Soviet Union over 20 years ago.

Today nuclear weapons are again being improved, made smarter and more ‘usable’ with guidance systems and ‘dial-up yields’. New delivery systems that cruise with the object of avoiding defense systems are far along in development and are soon to be deployed with next generation F-35s fighters, even as the nuclear triads of the US, Russia and China — and delivery systems of other nuclear weapon holding countries are reconfiguring and developing new capabilites and counter defense and offensive  systems.

The response of non-nuclear weapon countries has changed as this new nuclear era commences and, for the first time, there is to move to ban nuclear weapons outright. This coming week or soon thereafter there will be a vote at the UN General Assembly.

The goal — “to cooperate with all relevant stakeholders … to stigmatise, prohibit and eliminate nuclear weapons in light of their unacceptable humanitarian consequences and associated risks”; and to “fill the legal gap for the prohibition and elimination of nuclear weapons”.

Greg Mello of the Los Alamos Study Group reports on this history-making event:

Resources re: the BAN movement, via LASG

Resolution L41, “Taking forward multilateral nuclear disarmament negotiations,” with 48 co-sponsors as of two days ago, is coming to vote sometime between this Thursday, 27 October, and the following Wednesday, 2 November. Citizen diplomats from around the world affiliated with ICAN who are gathered at the UN in New York), believe the most likely date and time for this vote is this Thursday, between 3:00 and 6:00 pm Eastern time.

It is a moment of high drama in disarmament affairs. For the UN to mandate negotiations to ban nuclear weapons – a process now happening, led by non-nuclear states – is unprecedented. It is the most significant development in nuclear disarmament since the end of the Cold War.

This resolution is all but certain to pass. Some 127 countries have pledged to support ban negotiations (or 139, counting the countries which voted for the same pledge in the form of an UNGA resolution last fall), about two-thirds of the 193 UN member states.

This negotiating mandate is a product of the rising multipolar world, as U.S. diplomats recognize to their horror and outrage. Much more than the legitimacy and status of nuclear weapons is in play. As we wrote last year,

“…the ban process is not just about nuclear weapons. It’s also about power and initiative in world affairs – who has it, and who does not. The ban process, as opposed to other [purely] hypothetical disarmament paths (steps, building blocks, comprehensive binding disarmament treaties, and all other processes which nuclear weapon states can veto) is about who decides whether nuclear weapons are legitimate.

The Washington Post called the ban process an “uprising among civil society groups and the coalition of 107 [now 127] states, which are seeking to reframe the disarmament debate as an urgent matter of safety, morality and humanitarian law.”

A ban treaty would stigmatize and prohibit nuclear weapons, closing the “legal gap” stemming from nuclear weapon state practice and their associated assertion in diplomatic and legal fora that nuclear weapons are completely legitimate weapons – for them, and them only.

It has always been a stated UN goal to eliminate nuclear weapons, going back to the very first resolution of the UNGA in 1946. (It passed unanimously, since it was toothless; text and statements here.)

The political commitments being made in this process are already freshly stigmatizing nuclear weapons. They are bringing into diplomatic consciousness and state policy humanity’s inherent revulsion toward these most heinous weapons of mass destruction. In this process the prestige of nuclear weapons, their paralyzing mystique and their practical power in international relations, are already declining.

The resolution’s operative paragraphs mandate “a United Nations conference to negotiate a legally binding instrument to prohibit nuclear weapons, leading towards their total elimination,” to occur “from 27 to 31 March and from 15 June to 7 July 2017, with the participation and contribution of international organizations and civil society representatives.”

Crucially, treaty negotiations would occur under General Assembly rules – that is, without a consensus requirement or veto option for a privileged few, “unless otherwise agreed by the conference.” Creating a negotiating forum without a de facto veto rule has been a major goal of the resolution’s sponsors and this is therefore unlikely to change.

L41 requires the conference to “submit a report on its progress to the General Assembly at its seventy-second session [autumn 2017], which will assess the progress made in the negotiations and decide the way forward” – by majority rule, again.

“The resolution,” as ICAN notes, “acts on a recommendation made in August by a UN open-ended working group on nuclear disarmament in Geneva. More than 100 nations participated in the working group, with an overwhelming majority expressing their support for the prohibition of nuclear weapons as a first step towards elimination.”

The basic case for a nuclear ban treaty can be found here, with links to further information.

Many may find the recent UN press conference on 14 October discussing the ban with Beatrice Fihn, ICAN’s Executive Director, and Professor Matthew Bolton from Pace University, to be both interesting and accessible.

ICAN staff have been live-blogging highlights from the debate. Reaching Critical Will (RCW) has captured and posted many countries’ statements here.

Needless to say, the U.S. strenuously opposes any ban treaty and indeed the whole process, which it has vowed to boycott. On Friday Foreign Policy ran a good article by Colum Lynch (“U.S. Seeks to Scupper Proposed Ban on Nuclear Arms”) on U.S. opposition, with this rather sad lede: “Almost eight years after President Barack Obama pledged in a landmark speech in Prague to seek “a world without nuclear weapons,” U.S. diplomats are mounting an aggressive campaign to head off a bid by non-nuclear states to ban such atomic arms.” One of Lynch’s anonymous informants spoke of threats: “Washington has warned states considering voting in favor of the resolution that a ban could jeopardize defense arrangements with allies around the globe.” The hostility and aura of threat in the statements of the U.S. and the U.K. in particular were hard to mistake.

What Lynch did not say was what Assistant Sec of State Thomas Countryman told me (Mello) in August: the U.S. fears the democratic “pressure” a ban will place on our allies, especially in Europe, to rid themselves of nuclear weapons, both physically and in terms of nuclear “umbrella” agreements, while little or no such “pressure” will appear in Russia or China.

In September 1964, Lyndon B. Johnson’s presidential campaign released “Daisy,” a 60-second television advertisement that juxtaposed a petal-picking child with images of nuclear obliteration to caution against a Barry Goldwater presidency. It aired only once, but is widely remembered as perhaps the most powerfully negative TV ad ever created.

Now a half-century later, adding another peculiar footnote to an unpredictable election cycle, Bradley’s new super-PAC, 52nd Street Fund, is using similar apocalyptic footage in its first—and likely only—ad buy of the 2016 presidential cycle. According to a person familiar with the plan, the one-week campaign started Monday in Ohio, a must-win state for Trump, targeting voters in the Columbus, Toledo, and Cincinnati media markets.

“One nuclear bomb can kill a million people,” says the spot’s narrator, speaking over glowing shots of mushroom clouds. “That’s more than all the men, women, and children living in Columbus, Ohio.”