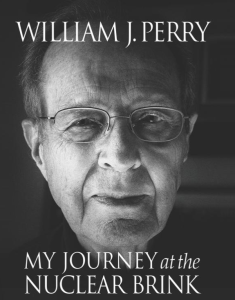 As the new year dawns, let’s review the recent book My Journey at the Nuclear Brink by William Perry, the former US Defense chief who perhaps knows more about the calculus of nuclear war than anyone alive.

Let’s zero in, for a moment, on the new Cold War, a war no longer with two antagonists and overarching “mutually assured destruction” acting, with notable exceptions, to prevent nuclear conflict.

Today and increasingly going forward, a new era is in the making, one with a new array of nuclear weapons, more usable, more tactical, more in line with a multi-polar world where proliferation is a fact.

The claim of North Korea to have tested a thermonuclear device must give more than pause to those who realize the threat horizon poised in front of international security.

The current budgets of the principal actors — the United States, Russian Federation, China — and second rung of nuclear players — Israel with its fleet of German-provided submarines with reported nuclear-capable missiles, the United Kingdom with its Trident fleet, the French and its increasing role in the Mid East, the frontline Kashmir hotspot and antagonism between India and Afghanistan — all present increasingly dangerous profiles.

Let’s look at some of the warning of Secretary Perry taken from his November 2015 book and in recent interviews:

“The probability of a nuclear calamity is higher today, I believe, that it was during the cold war. A new danger has been rising in the past three years and that is the possibility there might be a nuclear exchange between the United States and Russia … brought about by a substantial miscalculation, a false alarm.”

Automated command and control systems are being re-designed in a cyberwarfare age and are identified as a weak point, a vulnerability susceptible to error, coding ‘glitch’, or hostile cyberattack. The unreliablity of complex programming systems is no slight matter to conceive failing in a new version of ‘fail safe’ controls out-of-control.

One scenario how the system will fail and enable nuclear weapon use:

“Some kind of cyber-attack on our nuclear command system either in the United States or Russia could be the basis for a miscalculation made about a launch.”

“In the cold war we were not contemplating how a cyber-attack might go awry. Its hard to be specific about that risk, but it seems to be very real and a growing danger.”

“In the cold war, we and Russia were in the process of dismantling nuclear weapons … Today, in contrast, both Russia and the US are beginning a complete rebuilding of the cold war nuclear arsenals. And today Russia is threatening the use of nuclear weapons … Those are very dramatic steps between today and the 90s. That is a major difference.”

Escalation-counter-escalation (with a new ‘wild card’ of China projected to ‘call’ and play high-stakes nuclear-weapons cards to engage the US and Russia):

Over the next decade, the Pentagon is planning a $355bn “spending spree” to fund 12 new nuclear-armed strategic submarines, as many as 100 new strategic bombers, new land-based, intercontinental ballistic missiles capable of deployment on mobile launchers, and more than 1,000 nuclear-capable cruise missiles.

In his new book, “My Journey at the Nuclear Brink,” former U.S. Secretary of Defense William Perry warns “far from continuing the nuclear disarmament that has been underway for the last two decades, we are starting a new nuclear arms race.”

The Russians are building new nuclear-armed missiles, bombers and submarines to replace those built in the 1980s and now reaching the end of their operational lives. They claim that they must modernize their arsenal and increase the role of nuclear weapons in their military doctrine to counter U.S. missile interceptors being deployed in Europe. These, they say, could “neutralize” their nuclear deterrent, allowing the U.S. and NATO to dominate Russia.

Both the US and Russia maintain launch-on-warning nuclear systems. China’s new nuclear weapon systems, including ICBMs/SLBMs and platforms for nuclear cruise missiles are in the process of being engineered (and reverse-engineered, noting its version of the F-35), even as Russia-China promote their new strategic security alliance, multi-year/multi-billion ruble/yuan energy deals with an associated new international finance system, an alternative to ‘petrodollars’, and their mutual, bilateral security guarantees which draw Russia-China into a fast-developing 21st Century, Eurasian alliance.

As StratDem considers the 21st Century security environment, the realities of over-extension, debt, failed policy and blowback from war confront the US policy makers and public with hard choices going forward. The realignment of political forces and blocs is producing new security pacts and alliances, and the breakup of old treaties and alliances. The result will be a more multi-dimensioned set of power blocs with attendant risks of setting in motion a set of consequences both mandated by alliance and unpredictable in effect.

The recent shoot-down of a Russian plane at the border of Syria and Turkey with Turkey’s legal ‘protection’ ensured by NATO could have and already has had ramifications, with the Russian’s having moved in anti-aircraft missiles and its much more capable SU fighter jets. The consequences of another flare up could rapidly escalate and augers just one example of close-calls with nuclear-armed states and, in Turkey’s case, nuclear-weapon holding states.

The extension of NATO, as William Perry controversially points out, has set the stage for multiple new points of conflict.

The United States is as much to blame for the state of U.S.-Russia relations as the Kremlin, a former Defense secretary under former President Bill Clinton said Thursday.

“It’s as much our fault as it is the fault of the Russians, at least originally,” said William Perry, who served as Defense secretary from 1994 to 1997. “And it began when I was secretary.”

Perry, who was speaking to reporters at a roundtable hosted by the Defense Writers Group, also lamented the lack of military-to-military communications between the two countries and doubted the United States could work with Russia in Syria.

While Russian President Vladimir Putin has caused the recent rifts in relations by annexing Crimea and backing rebels in Ukraine, Perry said, the United States has done plenty over the last 20 years that caused Russia to feel disrespected.

“The problems today I think are mostly … Russian actions,” he said. “Entering Ukraine, threatening the Baltic nations, threatening the use of nuclear weapons — all those I think I put on the scoreboard of the Russians as being errors and things that are aggravating this deteriorating relationship.

“But if you look over a 20-year period and put the scoreboard together, there are at least as many American mistakes as there were Russian.”

Specifically, Perry cited the expansion of NATO and the decision to send U.S.-led NATO forces to Bosnia in 1996 as the start of the downfall of U.S.-Russia relations.

Prior to that, he said, relations were going well, including four joint military exercises between Russia and NATO.

“We were on the way to forging a really positive and solid relationship between the U.S. troops, and then in 1996 we announced we were going to expand NATO, which, as I said, I’m not opposed to in general, but it was premature,” he said. “That was the first move down the slippery slope.”

Still, in Bosnia, the United States and Russia came to an agreement to operate under the same command, thereby avoiding any potential disastrous accidents between the two nations, Perry said.

He doubts that could happen in Syria today.

Despite issues between the two countries, Perry said it’s “stupid” the United States cut off military-to-military communications after the crisis in Ukraine.