End of a Cold Week in February

Looking back at a long week, we discuss DC experts, nuclear issues, and end with tracks across the Steppes

This week witnessed a Republican candidate for President, Jeb Bush, announce he is his “own man”, not a legacy of his brother or father, then reveal Paul Wolfowitz as his foreign policy adviser. What a choice. The phrases “I am my own man” takes on new, uncharted meaning considering the history of Mr. Wolfowitz and the Bushes.

The announcement, selecting an architect of the Iraq wars and accompanying ‘Wolfowitz doctrine’, comes a week after the President goes to Congress and asks for a new authorization for the use of military force, months after having initiated the next phase of a war that was initiated in 1990 — and announced as necessary due to Iraqi tanks and forces at the border threatening the Kingdom of Saudi Arabia. Although independent satellite imagery later demonstrated this was not the case, the die was cast. President H.W. Bush’s Operation Desert Shield sparked an lethal engagement, with hundreds of thousands of death, trillions in spending, a disrupted region with growing violence, a ‘conflict’ going on some 25 years now, with no end in sight. The conference in DC we organized years ago, with the title “Surviving Victory” seems to be more prescient these days when the phrase “unending war” rolls of tongues much more frequently and phrases such as President George. W Bush’s declaration on an aircraft carrier deck off of San Diego, “mission accomplished” is never repeated.

The current request to use force involves a debate in Congress, even as the President announces that, as commander-in-chief and chief executive, he does not need Congressional authorization.

The Congressional war authorization ‘AUMF debate’ proceeds with formality as spokespersons for the Pentagon indicate an AUMF is not needed.

War against the Islamic State, Fox explains, will be long and hard.

“Our coalition is on the offensive. Isil [IS] is on the defensive, and Isil is going to lose,” the President said… “

The US has carried out air strikes against IS since last year, in a coalition with other nations.

It’s the first time a US president has sought Congressional approval to use military force since President George W Bush in 2002, ahead of the invasion of Iraq

The lonely Representative who has voted against previous wars step forward again:

“I am deeply concerned about the lack of repeal language for the 2001 AUMF, which has been and would remain a blank check for endless war,” said Rep. Barbara Lee (D-Calif.).

The 2001 AUMF isn’t long, but its breadth is staggering. It came in the aftermath of the 9/11 attacks, and it authorizes the president to “use all necessary and appropriate force” against any nation, organization or person connected to al Qaeda. That includes ISIS, which used to be part of al Qaeda.

“I would think that one consideration might be is when this three-year sunset is there, that it sunsets ’01 as well,” House Minority Leader Nancy Pelosi (D-Calif.) said during a Wednesday press conference.

Sen. Tim Kaine (D-Va.), a vocal advocate for a new AUMF, said he could support new war authorization that doesn’t repeal the 2001 AUMF as long as there is some kind of commitment by Congress to later address it.

Moving along, the Russians are coming, nuclear plants are spreading, and damn if those Mongols are in our distant past 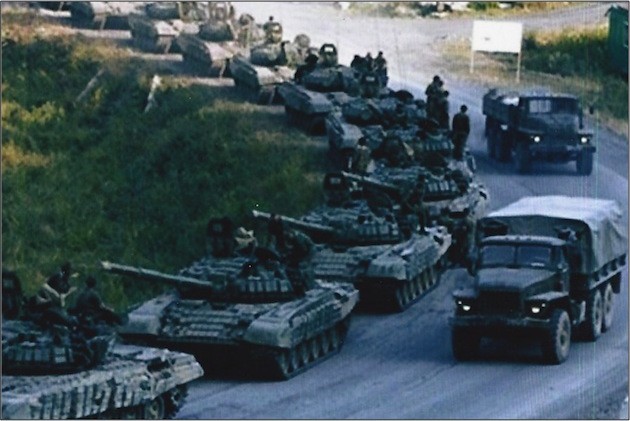 Sen. Inhofe produced photos of the incursion purporting to show Russian tanks threatening Ukraine. The Senator followed with strong statements advocating the use of US lethal assistance and more against Russian forces. The photos were then shown to be not what they were purported to be… a reverse image search and investigative follow-up demonstrated that the images were duplicates of other tanks in other theaters. The Senator’s displeasure with having been misled flared, even as he adjusted his remarks and continued to support widening the conflict in Ukraine. A sidebar in the story here is the involvement of an adjunct professor who has a long track record, including purporting that China has hundreds, thousands of hidden nuclear warheads. The use of misleading data, misinformation, mistaken charges — continue to act to provoke escalation.

Take a look at this piece of work –

It’s not so easy to fund nuclear plants these days.

Can Russia Afford Its Mega-Deals to Build Foreign Nuclear Reactors

On this note, we add a caveat, be careful, be very careful when pushing more nuclear projects.

We leave this week’s war and peace times report with a reflective, academic piece as to where the original Europeans came from…

Who are those people? Scientists think that Europeans came from a mysterious Indo-European homeland that may have been the Steppes of Ukraine and beyond.

Mongols as ancestors, a distant ancient horde related to us?