On the BZhRK rail missiles — and escalation 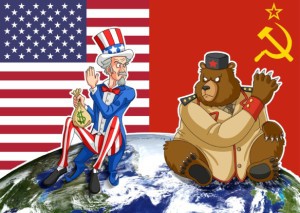 Amid the holidays then headlines of the past week, this day-after-Christmas news article distributed from RT, Russia Today, was a faint blip on the world’s mainstream media screen. The MSM was otherwise engaged and the announcement was made unaccompanied by the debate it deserved.

Strategic Demands believes this news deserves to be seen and acknowledged for what it augers — escalation of a confrontation and heating up of a Cold War that is no longer a memory but rather a gathering confrontation.

The forward front in a previous era of East-West confrontation and Mutually Assured Destruction (MAD) policy was eastern Europe. The nuclear weapons deployed, tactical and strategic, were high risk with little time to respond in the event of use, or perceived use. Many close-calls are a matter of historical record and ‘fail safe’ systems were found, over time, to be less-than-failure-proof. The political landscape in Europe created a new political party (the Greens) with an anti-nuclear agenda that resonated, not just within left-of-center politics but across the political spectrum.

The near midnight tick tock of a nuclear clock, as writers on such affairs during the Cold War pointed out, was omnipresent. The proverbial Sword of Damocles transcended Green sirens of potential for tragedy as warheads hung over not just Europe, where the risk was sharp and imminent within minutes, but the realization of nuclear weapons destructive power to end the world environmentally as we know it with any exchange of nuclear weapons came into sharp focus.

The ‘absurdity’ of a policy of called ‘mad’ for Mutually Assured Destruction and a likelihood of a failed fail safe system to prevent a nuclear war was, of course, captured in classic myth-telling of modern art — film and Kubrick’s “Dr. Strangelove.” Who can ignore Slim Pickens in his Texas drawl riding the bomb toward Moscow? Or “precious bodily fluids” of a wacked officer who gives the orders to go, or George Scott advising the President not to back down

or Peter Sellers in his Teller-esque wheelchair

and the reflexive problem with his arm… 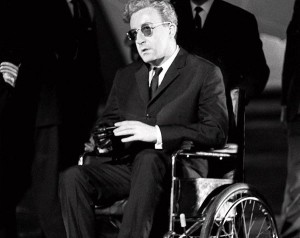 isn’t absurd as it can seem.

A new Cold War arrives on the heels of the old

The rise of BZhRK cannot be ignored shaping a moving image of, arguably, a new Cold War.

Even as the Russian Federation makes moves to ramp up nuclear weapons capabilities and ‘survivability’ of response systems, the US has moved to advance capabilities strategically, tactically and politically. The accompanying breakdown of the New START treaty is evident and producing warnings from respected strategic quarters. Much is at risk – and a withdrawal from nuclear treaty obligations is a threat in a expanding threat environment. One potential outcome is the withdrawal from the START treaty.

Voices are being raised to move away from engagement and toward confrontation and conflict, reversing trends for nuclear weapons control over the past two decades since Ronald Reagan first proposed START in 1982 and Mikhael Gorbachev and George H.W. Bush signed Start 1 in 1992.

The upcoming US election in 2016 will set the stage for either ongoing non-proliferation efforts or a ramping up of nuclear weapons system capabilities and potential for conflict.

As talks have broken off between the United States and Russia in 2013/14, the need to again talk to each other and resolve differences becomes more evident. The rolling out of nuclear weapons is underway, whether rolling missiles on trains, nextgen cruise missiles, and upgraded nuclear warheads to make gravity bombs ‘smart’ as with the B61-12 within the US nuclear weapons “life extension program”.

‘Nuke trains’ with Up to 30 Yars Missiles Rolling Out

A ‘nuclear train’ – properly called BZhRK, short for ‘combat railway missile complex’ in Russian – is a mobile platform for transporting and launching strategic nuclear missiles. Similarly to nuclear submarines, such trains are hard to wipe out in a preemptive strike because of their mobility and ability to be disguised as regular freight trains.

The Soviet Union had 12 such nuclear trains, each carrying three RT-23 Molodets (SS-24 Scalpel in NATO disambiguation) missiles, but they were released from combat duty after Russia and the US signed the START-2 treaty in 1993 and eventually decommissioned.

Last year the Russian military said that nuclear trains – which are no longer banned under the New START treaty – would be revived.

The former museum set piece in St. Petersburg will no longer be the historical memory, but rather a warning of things to come.

“The New START treaty does not cover rail-mobile ICBM launchers because  neither party currently possesses such systems. [Ed. as of 2011]

“ICBMs on such launchers would be covered under the generic launcher limits, but the inspection details for such systems would have to be worked out between the parties if such systems were reintroduced in the future.

Rail-Mobile Launchers of ICBMs and their Missiles

US Department of State

Reports on the ‘survivable’ system of nukes-on-rails…

The ‘politics’ of nuclear weapons reduction in Europe shifts as the geopolitical landscape realigns… the NATO moves and Russian Federation countermoves, the Ukraine civil war, Crimea, conflict moving toward crisis…

From violations of airspace to near mid-air collisions, the number of incidents between Russia and NATO has soared dramatically, increasing the danger of an unintended escalation

In 2013, before the heating up of tensions, sanctions

The President speaks out on nuclear weapons reduction

“After a comprehensive review, I’ve determined that we can ensure the security of America and our allies, and maintain a strong and credible strategic deterrent, while reducing our deployed strategic nuclear weapons by up to one-third,” Mr. Obama told an audience of 4,500 gathered in scorching heat on the east side of Berlin’s historic Brandenburg Gate — the side of the city walled off by the Soviets during the darkest days of the cold war. “And I intend to seek negotiated cuts with Russia to move beyond cold war nuclear postures.”

The proposal to limit American and Russian deployed strategic warheads to about 1,000 each would bring the two countries back to around the levels of 1954, experts said. The president also vowed to work with NATO to reduce the unrestricted smaller tactical nuclear weapons still in Europe and to push the Senate to finally ratify the 17-year-old Comprehensive Test Ban Treaty. Taken together, the moves revived the effort Mr. Obama began in Prague in 2009 to put the world on a path to eventually eliminating nuclear weapons, one of the most idealistic, if hotly disputed, aspirations of his first term.

Yet even as Republicans argued that he was going too far at the risk of national security, his moves represented a more modest step than many arms control advocates had sought. A Pentagon report released Wednesday affirmed that the United States would retain its nuclear triad — missiles, bombers and submarines — even amid further cuts. Mr. Obama did not take weapons off high alert and stopped short of seeking a vote anytime soon on the test ban treaty, which was rejected by the Senate in 1999.

Overtures to negotiate against a backdrop of nuclear prep…

Tactical nuclear weapons and being ‘trapped’

The threats of ‘accidents’

CSIS – US tactical nuclear weapons in Europe, next steps

In December, the Senate passed the $557 billion National Defense Authorization Act for fiscal year 2015. For its part, the National Nuclear Security Administration gets $2.7 billion to modernize the B61, enhance and extend its operation lifespan and platform delivery capabilities…

The B61-12 will have a modern electronics and radar system, and a new Air Force-provided tail kit with controllable fins. In other words, it’s becoming a precision-

The 11-foot-long, 700-pound B61 is light enough for a high-speed fighter jet. The F-35 Joint Strike Fighter will be able to carry two of them.

From FAS – The NNSA budget request for FY2015 includes $643 million for development of the B61-12, which is expected to cost $8 billion to $10 billion to develop and produce. Two B61 hydrodynamic shots were conducted in 2013. The Air Force budget request includes nearly $200 million for development of the guided tail kit, estimated at more than $1 billion. Several hundred millions more are required to integrate the B61-12 on five different aircraft, including Belgian, Dutch, German, Italian and Turkish fighter-bombers. An estimated 480 B61-12 bombs are planned, with first production unit in 2020.

The B61-12 will also be integrated on the new F-35A Lightning II aircraft by 2025. The combination of the guided standoff B61-12 with the stealthy fifth-generation F-35A fighter-bomber will significantly improve the military capabilities of NATO’s nuclear posture in Europe.

A enhanced mission for the F-35 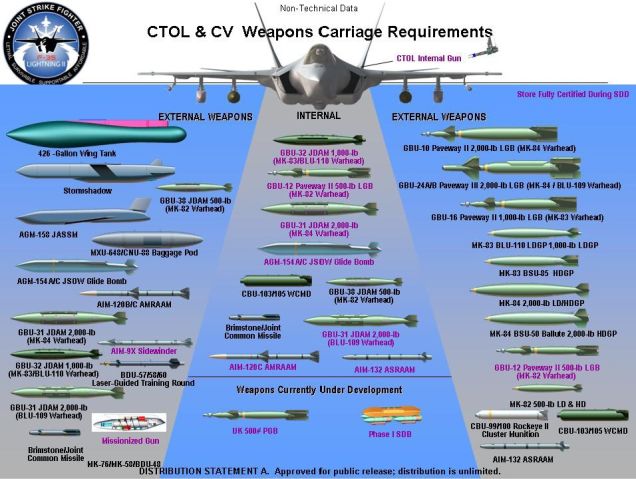 “The 2010 Nuclear Posture Review concluded that the United States will not develop new nuclear warheads; the U.S. is pursuing warhead Life Extension Programs (LEPs) to ensure a safe, secure and effective nuclear stockpile without nuclear testing. The objective of the LEPs is to strengthen deterrence by ensuring effective means for holding targets at risk, not to support new military missions or provide new military capabilities. LEPs will not give the weapons new missions or capabilities. LEPs may change measurable performance/design characteristics in the process of replacing age-affected components. For example, the B61 LEP will allow more space to incorporate safety and surety measures in the warhead. The B61 LEP will also allow for increased aircraft survivability, and safer delivery profiles.

Thom Hartmann re: top Russian military strategist says US is preparing for nuclear war against Russia

Is the U.S. preparing for theater nuclear war against Russia in Europe?

“Dr. Konstantin Sivkov argues, in a March 18 Russian article entitled West Prepares for War with Russia that, indeed, that is exactly what the U.S. is doing, particularly after Russia has inflicted a strategic defeat on the U.S. with its annexation of the Crimean peninsula. Sivkov, president of the Academy for Geopolitical Studies, founded by former senior Russian Defense Ministry official Gen. Leonid Ivashov, points to the modernization of the B61 tactical nuclear bomb and the plans to integrate it into the F-16 and Tornado aircraft of five NATO countries as well as U.S. forces stationed in Europe, a task to be completed about 2019, when the first new B61-12’s are to be delivered. Around the end of the decade, those F-16’s and Tornados are to be replaced by F-35 Joint Strike Fighters, which will also be capable of delivering the enhanced B61 bomb.

“Sivkov is clearly drawing on two recent postings by Hans M. Kristenson, the author of the Federation of American Scientists’ Strategic Security Blog, though without attribution. Kristenson very strongly suggests that the B61-12 enhancement is a violation of the NPT and of the Obama Administration’s own pledges, because it essentially creates a new nuclear capability that doesn’t exist with the current versions of that bomb, but does it under the pretext of a life-extension program (albeit one that’s behind schedule and over budget). Under the program, the upgraded bomb gets a new tail kit assembly that substantially improves its accuracy from about 110-180 meters down to perhaps as little as 30 meters. The tail kit also gives the bomb the capability of gliding towards its target, something else that current non-guided versions of the bomb can’t do. According to the Obama Administration’s own definition of a “life extension program,” the B61 is not supposed to get any new military capability.

But there it is.