With perspective, given the history of Jeffrey Goldberg, the US President grants exceptional access with lengthy interviews and the result is the April issue of Atlantic, headlined “The Obama Doctrine“. It’s worth reading — and reflecting on how the President sees ‘existential threats’ 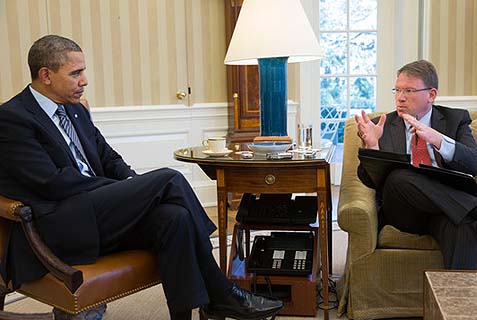 Perspective, of course, flavors each of our points of view.

One can choose any world leader and find that their background influences their outlook, their opinions, judgments and policies. The nature vs nuture argument is perhaps nowhere as clearly wrought as with a figure who stands on history’s stage and acts out.

Certainly in the Middle East, the character of the actors in each of the countries can be best seen and understood when taking their personal history into account.

Take Israel’s leader ‘Bibi’ Netenyahu who comes from a strong patriarchal line. His father’s strong Zionism was pointedly aimed at the Holocaust and its causes. It is no exagerration to say that the father’s opinions greatly shaped his son and his son’s opinions and policies. The recent statement by the Prime Minister that Palestinians had a direct role in convincing the German Chancelor to implement death camps was not far removed from the opinions of a previous generation. The father’s position became the son’s. Although Netenyahu’s Palestinian-Nazi statement was later modified, it captures  his deep beliefs and reasons why his policies to protect the Israel homeland are what they are as conceived and implemented.

Which brings us to Jeffrey Goldberg.

Well-known and controversial, Mr. Goldberg brings his point of view into play in a revealing, personal, and ultimately frustrating article that has heated up DC. Focusing largely on President Obama’s Mideast trevails and the misteps of the administration, Goldberg has no lines as controversial as his “chickensh-t” revelations that he reported the administration and President’s advisers (and perhaps President himself) felt was Netenyahu’s problem in dealing with peace efforts. Fear of going where others have gone and been assasinated in Israel as with Rabin, can be of course understood. Less well understood is the linkage between peace policy, conflict and war in the Mideast.

Goldberg has his detractors, which is no surprise and anyone who steps out on Mideast issues has detractors and takes risks. No criticism of his work and efforts to understand should denigrate his personal risks.

Clearly, Goldberg has been wrong as others have been terribly wrong on policy. He has ‘apologized’ for his advocacy of war on Iraq. As Golberg explained in 2008 in Slate, “How Did I Get Iraq Wrong?”, he “didn’t realize how incompetent the Bush administration could be.”  This is difficult to disagree with but the larger picture is a disaster, an ongoing disaster, one of ‘blood and treasure’, millions of lives impacted, hundreds of thousands of deaths, generational revenge put into motion, and a US involvement with a pricetag in the trillions. This in turn has compounded US debt and led to overextension of US obligations at a time when the US economy, infrastructure, and needs are wavering and a candidate named Trump is gathering wide support for spending at home not abroad — and neo-cons profess that Trump would be a disaster for US “interventionist” policies in the Mideast.

Goldberg’s critics such as Glenn Greenwald recall his war advocacy as “one of the leading media cheerleaders for the attack on Iraq”, which he was, who “compiled a record of humiliating falsehood-dissemination in the run-up to the war that rivaled Judy Miller’s both in terms of recklessness and destructive impact.” His work did not rival the impact of Judith Miller’s NY Times reporting in lending casus belli that only later were found to be fabrications.

The larger lessons of the Iraq war(s) and Mideast wars are not in the Goldberg review. Rather, he opens with a tendentious claim that Syria’s Assad is, indisputably, the person behind gas attacks and Goldberg launches into a “red line” discussion of the weakness of the President in not following through with military intervention. This in effect challenges the remainder of Goldberg’s article.

The fact is others have investigated further into the Syrian war and atrocities, reporters like Seymour Hersh, whose reporting calls into deep question allegations like Goldberg’s of a one-sided use of banned gas. Sy Hersh has been around, for decades, and he knows about set ups and provocations and war crimes. A Strategic Demands writer worked with Hersh going back to Dispatch News Service. Although many have questioned Hersh’s reporting over the decades, few reporters rival him in sourcing and stories that have stood up to challenge and changed perspective.

Here, Goldberg puts his own perspective and judgment on the line. In words neglected and needed to be said in “Obama’s Doctrine”, if Obama had not put a stop to cruise missiles and a Syrian war, the Nation may have gone headlong into another war reminiscent of Vietnam and Iraq. Perhaps Goldberg should recall the millions of lives lost as a result of false Gulf of Tonkin claims and the ongoing disaster of Iraq, now a regional war based upon false claims of WMDs. The history that took the Nation into war is not so distant as to be conventiently forgotten. Goldberg should not forget.

The “doctrine” of a president attempting to avoid another war is at the center of Goldberg’s tale. The next US president likely will not be so inclined and there are many who are inclined to spend more for war at a cost to the Nation’s overall security.

The perspective of the President looks to a larger threat horizon to the Nation’s security and global security as those lobbying for expanded wars push forward. Goldberg presents a ‘sidebar’ in effect to his main narrative when he captures the President’s thoughts comparing the IS/ISIS/ISIL to climate change and the accompanying battery of consequences across the planet.

Climate change “is a political problem perfectly designed to repel government intervention. It involves every single country, and it is a comparatively slow-moving emergency, so there is always something seemingly more urgent on the agenda.”

“Right now, across the globe, you’re seeing places that are undergoing severe stress because of globalization, because of the collision of cultures brought about by the Internet and social media, because of scarcities—some of which will be attributable to climate change over the next several decades—because of population growth.” “And in those places, the Middle East being Exhibit A, the default position for a lot of folks is to organize tightly in the tribe and to push back or strike out against those who are different.”

“If you start seeing more severe drought; more significant famine; more displacement from the Indian subcontinent and coastal regions in Africa and Asia; the continuing problems of scarcity, refugees, poverty, disease—this makes every other problem we’ve got worse… That’s above and beyond just the existential issues of a planet that starts getting into a bad feedback loop.”

The President, of course has few supporters among Republican candidates for president on this over-the-horizon point of view.

None of the Republican candidates for president support action against climate c.hange. Cruz and Rubio voted against every green bill, and opposed every pro-environment, anti-pollution piece of legislation. Trump has taken things further, declaring he believes climate change a hoax.