‘Scoop’ / News now being received … an extension of the New START treaty is imminent. If so, this would be a smart move toward a nuclear weapons control architecture. Hopefully, the New START step forward comes to pass and sets the stage for agreements to follow … 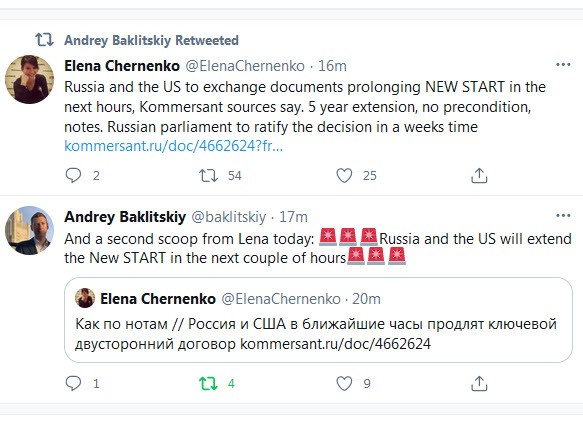 Both houses of parliament voted unanimously to extend the New START treaty for five years, a day after a phone call between U.S. President Joe Biden and Russian President Vladimir Putin. The Kremlin said they agreed to complete the necessary extension procedures in the next few days.

Speaking via video link to the World Economic Forum’s virtual meeting, Putin hailed the decision to extend the treaty as “a step in the right direction,” but warned of rising global rivalries and threats of new conflicts.

The pact’s extension doesn’t require congressional approval in the U.S., but Russian lawmakers must ratify the move and Putin has to sign the relevant bill into law.